It was another good morning in the Black Hills. After a brief discussion, neither Sherm nor we wanted to travel too far. Sandy and I joined the crew in the bar for the buffet and blogging session, and shared the camaraderie of the breakfast table. Sherm let me use his computer again to let me update yesterday's blog. 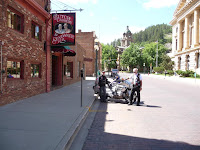 The groups again headed out for their own particular daily goals. Some went to Devil's Tower, Don went to Rapid City and some headed for parts unknown. As for us, we took the long journey down to Deadwood on the back road, where we were early enough to find it relatively uncrowded. After parking on a side street, we walked over to the main drag. Deadwood has a special dispensation that allows table gambling without tribal involvement, so every hotel and bar has slots and many have blackjack and craps tables. 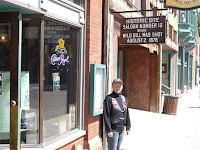 The most famous occurrence in Deadwood, the murder of James Butler 'Wild Bill' Hickock by Jack McCall, took place in the Number 10 Saloon. There is a Number 10 Saloon prominently located on Main Street, but this isn't the original location. That can be found further down the street on the other side. In the back, downstairs, is a Wild Bill interpretive site with some relics and facts about Hickock's short sojourn in Deadwood. 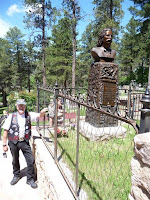 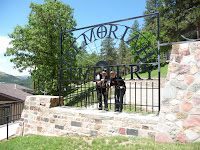 After paying our respects to Bill and visiting a couple of shops without making any purchases, we followed the road back to Mt. Moriah Cemetery. This lies at the top of one of the steepest hills I have ever ridden up. The lady at the gate told us that sometimes it took all day for the funeral procession to wend its way up to the cemetery and the burial would be conducted by lantern light. We visited Wild Bill's grave and the adjacent one of Calamity Jane, whose dying request was to be buried beside Hickock. I offer my apologies to my friend Jim for not visiting Seth Bullock's grave, but he is planted about 1/4 mile behind the cemetery up about 750 feet higher, and I didn't intend to suffer a coronary trying to make the climb. 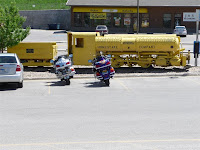 From Deadwood, we rode up to Lead and had lunch at Subway. Then we went across the street and joined a tour of the Homestake Mining Company. Homestake started mining gold in Lead over 100 years ago and operated until the late 90's when Barrick acquired the company and shut the operation down permanently. The Open Cut, a huge pit, lies immediately adjacent to downtown Lead while the underground operations worked down to 8,000 feet via two stages of shafts. The processing facilities were very similar to those in Timmins, Ontario, notwithstanding the vertical terrain. Now Homestake has been selected for another underground neutrino observatory just like SNO in Sudbury. This area has a great deal in common with my several homes in Northern Ontario and I feel quite comfortable here.

We got back to the Lodge in the mid afternoon, where we read, watched some TV and visited. Waterman, Els and Vicki arrived from Colorado, our final expected guests. The supper buffet in the Lodge got underway about 6:00 PM and was delicious. Then Melanie continued the festivities with a VROC trivia contest, rewarding correct answers with prizes. Some of us were limited in the number of answers they could provide. After supper, we hung out in the bar until it was closing time due to the cold temperatures. Then the few of us remaining sat outside for a while before shutting down about 11:00 PM.

For yet one more perspective on the rally, Jamey T. is running the official Aztec Rally Blog.