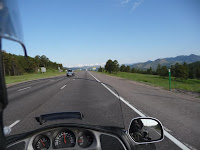 It was nice to wake up and see that, while The Weather Channel was forecasting possible severe weather, it was BEHIND US. While we were packing, I noticed I had lost the dust cover on my Bushtec trailer electrical plug. I have another one at home and this should survive the rest of the trip. We decided to skip breakfast at the hotel, since all they offered was a discount in their restaurant, and head out. The opening view of snow covered mountains as you head west out of Denver on I-70 are breathtaking. 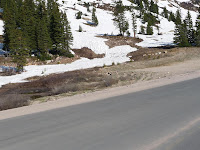 We left I-70 at Lawson and stopped at the same Conoco where we had found Greg last year after he hurt his ankle. We put on warmer gear since it was 13C and we were about to head up Berthoud Pass. The climb up the south side was so much nicer in the daylight without the rain and fog and on a bike I am familiar with. We rode at a leisurely pace watched the scenery. Near the summit, there were several deer on the side of a hill watching us with no sense of alarm. The photo at the summit shows the snow still on the ground. There were several Minnesota HD's at the top but they didn't acknowledge the Tupperware rice burner. On the way down to Winter Park, we got caught behind a tank truck and passing wasn't an option so it took a long time to descend.

North of Winter Park, we got stuck behind a slow pickup truck and couldn't pass due to heavy southbound traffic on US 40. It mystified us as to where they were going because the traffic on 40 over the pass was very light and we wondered where they were ending up. 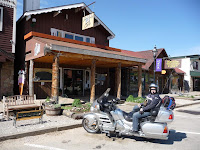 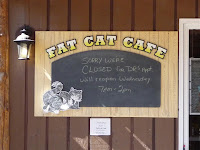 The reason for going north over the pass was to pay a visit to last year's WWR venue, Grand Lake. Anybody who followed our travels back then will recall the good times we had hanging out at the Fat Cat Cafe in downtown Grand Lake. Sally, the proprietor, was very good to us and the food was spectacular. We skipped breakfast so that we could eat here. Since we have had so much good luck this trip, it was bound to go against us eventually and, as you can see from the blackboard, the Fat Cat was closed for the day. With tears in our eyes, we adjourned to the Rocky Mountain Coffee Company for a breakfast croissant and coffee.

With the Grand Lake mission a failure, we set out to go and meet Malachi and Corvette in Glenwood Springs. First, I stopped to fuel up at the same old Shell station in Granby that we got gas at last year. Imagine my shock when I put my credit card into the pump and it slid ALL THE WAY IN. Just a little edge was showing and I couldn't get a grip on it. Before I could get my tool kit out, one of two Texan Wing riders had a humongous tool kit out of his Bushtec trailer and gave me some needle-nosed pliers. These worked and my card was rescued. The proprietor told Sandy that happened all the time. A sign on the pump would have been nice.

We talked to the Texans, who were both riding two-up with trailers. One had just traded an '02 that had lost it's ring gear bearing at 100K miles. The wives were curious as to how we could get six weeks worth of gear onto the bike without a trailer. I explained that Sandy was a magician.

From Granby, we headed west on US 40. In Byers Canyon on the twisty roads, I got behind yet one more slow, confused Florida driver. This was a lady driving a Ford 3500 with two dirt bikes in the back. Save me from slow Floridians. 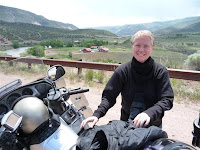 Past Kremmling, we turned left on Colorado 134. This was our first time on this and we enjoyed the winding curves up and down over several passes. Then we took SR 131 south. We stopped at one spot overlooking a valley to remove some of the warmer gear. I am a fan of model railroads and sometimes see a scene with red rock cliffs, a river and railway tracks at several different elevations. I never realized that such a place existed in real life, but Bond, Colorado comes close. 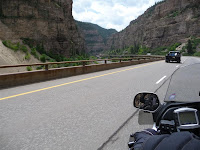 Back on I-70, we continued west and eventually came to Glenwood Canyon. The Interstate through here is largely built on trestles and operates on two levels for the different traffic directions. It is spectacular and we even got to see an Amtrak train going through the gorge on the other side of the Colorado River. I called Malachi while we were on the road and he tried to give me directions through Glenwood Springs. I asked for the address instead and programmed it into the GPS. 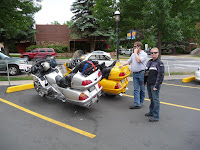 It was a good thing the Zumo was directing because Glenwood was busy. It took us right by where Mal was waiting. We pulled into a pharmacy parking space and waited while he got his YELLOW wing from wherever College employees had to park. Then he lead us over to a little sandwich shop called Chomps where Yvette was waiting with one of her bikes, a Suzuki Intruder. 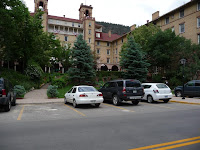 On the way to Chomps, he took us past the Hotel Colorado which had once been a sanitarium. It was in 1887 that the infamous John Henry 'Doc' Holliday passed away from tuberculosis at the age of 36. Holliday was a colourful character from the old west, most famous for his part along with the Earp's at the Gunfight at the OK Corral in Tombstone, Arizona.

We enjoyed a very nice lunch and caught up on news. After lunch, Yvette led us west on I-70 to their home in Silt. The young lady doesn't spare any horses when she wants to make time....... 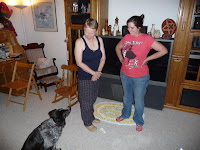 When we got to Mal and Yvette's home in Silt, we met the three dogs and one cat on residence. Here, Sandy and Yvette watch as Tink tries to ingratiate herself. Mal and I went to Rifle where he picked up some filets and then stopped at the liquor store for a bottle of Southern Comfort. Back at the house, Sandy did laundry while supper was being prepared. The steaks were excellent and the corn on the cob and baked potato were perfect complements.

After supper, we visited for a while but turned in before too long. We'll be seeing the two of them in Oregon next month and maybe Mal will make the run up to Deadwood next week as well. Thanks for the hospitality, Mal and Yvette. See you soon.
Posted by Jim "Skid" Robinson on 6/17/2008