It was a fine but slightly cool morning when we stuck our noses outside the motel room door. Last night I let air out of the tires because they were too high, something I ascribed to altitude. It seems that, although I let them cool for four hours, it was still due to temperature. Out came the trusty Airman compressor. You think I’d understand this better after all these years.

There is significance to the Thunderbird Motel that I just remembered. Sandy and I stayed here in 2004 on our way to HSVROC, riding the ’00 Nomad and towing a cargo trailer. We had just run across the Salt Flats into a strong headwind at 105 degrees and the first thoughts that I needed more power and a Wing would do occurred to me in this very establishment.

We gassed up on the way out of town and then challenged I-80 East at a blistering 60 MPH until we reached the town of Wells. We had breakfast in a Burger King (the new McDonalds wasn’t open yet). The young lady behind the counter asked Sherm if he wanted the two pennies in his change. He said he’d rather have them than anybody else. I wonder how much she makes doing this? 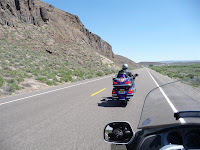 From Wells, we rode north on US 93 through the Great Basin with Sherm taking the point. Most of the ride was up through a great valley that had some farmland, much desert and nice rock formations. We stopped at a nice rest area at the mouth of a small canyon where we met two California Beemer riders returning from John Day, Oregon. Shortly after that, we crossed into Idaho at the town of Jackpot. Approaching Twin Falls, the land became greener and farming was evident everywhere along with irrigation equipment. 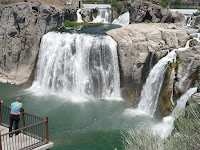 In Twin Falls, Sherm asked for directions to the falls. Instead of sending him to Twin Falls, we were steered to Shoshone Falls. The gatemen let us go down for nothing to see if it was worth the $3.00 per vehicle entrance fee. Sherm, Slammer and VSP were free anyway since they had Golden Age cards. Here, Sherm is getting photos of the falls, resplendent in the ubiquitous tie-dyed shirt. On the way out, I gave him a five-dollar bill and he gave me a Washington and a Loonie. I guess he had been waiting for a Canuck. 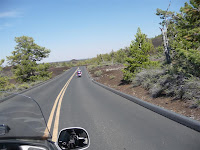 From Twin Falls, I led as we took US 93 north to Shoshone where we caught US 26/93 northeast to Carey. From there, we went east on US 20/26/93. This is the first time I have run three US highways concurrently. Out in the middle of nowhere, we arrived at The Craters of the Moon National Monument. This is in the centre of massive black lava beds that have oozed out of the Earth’s surface over the years. I stamped my Passport in the Visitor Center and then we had sandwiches made from the contents of Slammer’s cooler. Then Sherm, Slammer, Sandy and I took a tour of the loop road through the monument. Don rested back at the VC. 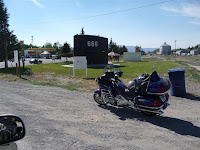 Leaving Craters of the Moon, we proceeded to Arco where we found someone had parked a submarine in a local park. Sherm is admiring the conning tower. I don’t know why that number was used. Arco and Atomic City are where the first nuclear reactor was built and tested. The military facility is huge and the buildings are very far apart. We had to pick up the pace into Idaho Falls because the shift had let out at Atomic City and was in a hurry to get home along this two-lane road.

We found the Super 8 in Idaho Falls and got two rooms on the third floor. WiFi was fine before we went to dinner at Smitty’s Pancake and Steak Family Restaurant. Then we stopped at Wal-Mart for essential items and went back to the motel where the Wireless Access Point on the south end of the building was kaput. We managed to snag some marginal signal from the North WAP, but it was a pain. The front desk was unable to fix it despite repeated calls. Unfortunately, this is not an unusual occurrence.

We didn't do a lot of miles today, but with the heat and the sightseeing, everybody was pretty well beat. I skipped the blogging and the photo sorting took a while because Sandy had taken 132 shots. Everybody turned in early.