There was a strange thing happening in the Super 8 breakfast room this morning. Like many places, they had those do it yourself waffle machines. The different thing here was that a guy named Scott, aka the Night Auditor, aka The Waffle Guy, was making them for the guests. He did a fine job even though none of us had waffles. 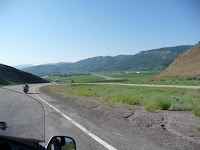 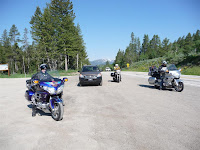 We set out east from Idaho Falls on US 26 along the Snake River Canyon. The mix of steep bluffs and agricultural land was quite scenic. In the crossroads of Swan Valley, we turned onto SR 31, an official Scenic Byway. We stopped for a break at the summit of Pine Creek Pass at 6,764 feet. Then we wound our way down to the village of Victor, which sits in an obviously alpine meadow. Don needed a pit stop, so we all took a refreshing pause. Sherm got a picture of a ‘real’ cowboy.

Proceeding west from Victor on SR 33, we crossed the state line into Wyoming where the route changed to 22. The road swept us up and down and back and forth through the Teton Pass, the first time we have ever been on this road. We went through the pretty town of Wilson and down to US 189/191 into Jackson. OK, this was a zoo. People everywhere, no parking, rising temperatures. Sherm wanted to get a group photo by the arches of antlers downtown, but I needed to get out of there. Niagara Falls on a bad day had nothing on Jackson. 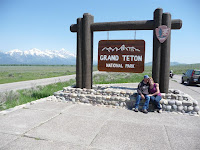 A few miles outside town heading north on US 189/191, we shed the congestion and frustration of humanity and entered another world. An elk preserve, a huge valley and the most spectacular mountains I have ever witnessed in person. The Grand Teton Range. We stopped at a turnout for photos and awe. A young couple, newlyweds, offered to take a group picture for us and we, in turn, took their picture. I gave the young man this blog address so, if you find this, it was nice meeting you and we wish you both a long and happy marriage.

Further up the road, we stopped at another turnout and looked at the glaciers. We also talked to a couple from Las Vegas on a Harley. Nice people. Moving on, we watched for wildlife since the terrain was perfect for it but, other than one antelope, there was nothing. 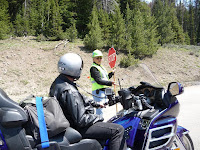 Most of the traffic continued north to Yellowstone at Moran Junction, but we wanted to avoid the crowds and turned due east on US 26. After a while, we started to subtly climb. Up and up we went. At 8,000 feet, snow started appearing on the roadside. By the time we reached the summit of Togwotee Pass at over 9,600 feet, there were solid fields of snow on both sides of us. We stopped on the way up for some construction blasting, and the nice lady shown here kept us amused. She lives in Dubois (pronounced Do Boys just like Michael Jackson, according to her), down in the next valley. 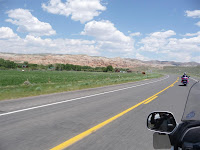 As we descended into the valley, the terrain suddenly turned red just like Utah. This was spectacular and there were multi-coloured badland like hills on our left. We stopped in the quaint town of Dubois for lunch at the Cowboy Café. Sherm thought he was having a salad but he didn’t. I’ll let him tell that story.

Togwotee Pass is the Continental Divide and Snake River was no longer flowing against us. No, the famous Wind River was now winding along the same way we were going. And boy did it wind. There are no more pictures here because Sandy used up all the battery in the camera. We need a spare.

We left the valley/canyon as we entered the Wind River Indian Reservation. The land was flat with the Wind River Range on our right and a rough looking storm brewing over the crest. Ahead and to the left was another, smaller system with what appeared to be verga. Utemike taught me about verga, rain that never reaches the ground. Beyond that was yet another storm. We hustled on between them, with a few drops falling from the small system bordering the road.

Our arrival in Riverton just ahead of the bigger storm gave us a start. Motel after motel had NO VACANCY signs out. It was 2:30 on a Tuesday afternoon. This was new. After running the length of town, I used the GPS and phone to find that the Super 8 had two regular rooms left. They were $112.50 each with our AAA/AARP discount. Checking with another booked hotel on what their rates were, I discovered this was par for the course. So, by all means, travel this road but avoid overnight stays in Riverton.

The Super 8 was very small and very old. Our room was, how should I say, cozy? We had to step outside to change our mind. But the severe weather warning for nearby Lander suggested we had done the right thing. Weather.com radar showed that the big storm south of us grazed Riverton, then combined with the bad one to the north and cut the highway to Casper (where we would have headed if we hadn’t stopped here) twice. Winds gusting to 70 MPH and large hail were part of the cell. Lander warnings were continuing on TV long after the system had gone.

Two BMW’s, carrying a couple from Vancouver, rolled in shortly after we did. They are homeward bound and the guy is the same height as VSP. We drove over to the Trailhead Restaurant in Slammer’s CRV for supper. The food was OK and inexpensive. Then we came back and I blogged while the others went next door to a Dollar Tree to see what they could find. My WiFi 802.11B antenna isn’t reaching the WAP here either. I really need to get a G card so I can keep up. It will be faster, too. Now, I need to go down to the lobby to post and receive my mail.

We have decided, since VROCers started arriving yesterday, that we will ride right through to Lead tomorrow. Slammer and I called and they have room at the resort for us to arrive a day early. So we’ll be communicating tomorrow from the Aztec Rally.
Posted by Jim "Skid" Robinson on 6/24/2008