We have no coffee in the room. Very disconcerting. It is available in the breakfast area, so we wandered down and got some. Then we rode over to the Unique Café in downtown Boscobel where people were starting to gather for the traditional breakfast. The guys camped on Fly Hill in the town park said they heard tornado sirens about 2:30 AM, but we must have slept through them. 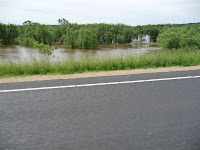 After breakfast, we wandered over to The Sands. There would be no large group ride today, so Stewey decided to join us for a ride to Prairie Du Chien. As we rode along the north side of the Wisconsin River, we could see how much the river has flooded the adjacent land.

First stop was a Cabela’s, where Sandy and I got cool shirts. These are supposed to help us when we get to the heat of the west, along with our Cool Vests. The shirts are skintight, not so good on me. I also got a device to sharpen knives. Then we went to Culver’s Frozen Custard where we shared a four scoop Caramel/Cashew sundae and Stewey had a hamburger with bacon, cheese and no bun (Atkins). Then we stopped at Wal-Mart where Sandy got more flavoured prunes and I picked up some Mother’s Mag Polish and a few cheap terry rags. 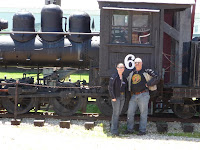 We rode back to Boscobel via Fennimore for a change. There, we stopped at the railway museum where we learned about The Dinky, a 3-foot narrow gauge engine that used to ply this area a century ago. The volunteers working there told us how Fennimore was becoming more and more isolated as all forms of mass transit stopped operating. I’m not sure if this is good or bad since this is a very nice little town. Isolation might be a positive thing.

Back at the Sands, others had started rolling in. The Iowa people had been quite creative finding their way around closed roads. Cedar Rapids and Des Moines seem to be particularly hard hit with areas of the cities under water. They are saying this is classed as the 500-year flood. 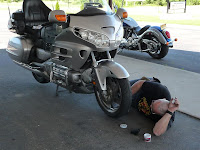 I took the Mag Polish and rags and started working on my wheel rims. The front isn’t too bad and, after an hour or so of steady effort, came up quite nicely. The rear, on the rotor side, hasn’t been cleaned in 88,000 miles and the build-up of brake dust and crud is intimidating. I wrecked two of the towels working on it because it is so abrasive. I figure half an hour of work a night might have it presentable by the time I get home. In the meantime, everyone who came by had to get a picture of me cleaning the bike, an activity I am not known for. Wrong Turn arrived from West (By God) Virginia on his matching ’05 silver Wing while I was lying under the bike. 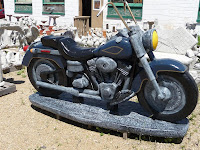 While I was working on the wheels, Sandy went across the road and got pictures of some concrete lawn ornaments. This motorcycle was particularly impressive.

When we got hungry, we decided to go downtown and try out the KK Restaurant. However, there was a wedding in town and they had the place totally full. The Vale was closing at 6:30 for a pre-wedding dinner, so we went back to the Unique. Sandy had perch and I had a fine steak and mushroom sandwich.

After supper, Wrong Turn took Susan for her first Gold Wing ride. We followed him past The Sands and on to the Wisconsin River at about 90 MPH. There, I suggested we run a bit of Highway 60 to let her experience some curves. He told me to lead, so I set out west at about 80 MPH by the GPS. After a couple of miles the GPS showed a side road around the next bend where we could turn around. I slowed to about 50 as we came around the corner. There was the road and, going the other way, a ghost police car. This was a very lucky Friday the 13th for me……… 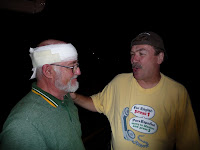 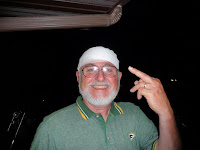 Back at the motel, we sat around for another while. About 8:00, I took Sandy back to our place and I returned to visit some more. Not long after dark, Slammer was leaning back in a white plastic chair when it tipped back and he landed head first on the asphalt parking lot. He split the back of his head open and Wrong Turn did a fine job with first aid until Boscobel’s finest and the local EMT’s arrived and patched him up. Here Stewey tells Slammer that he should not be playing Dead Bug (a scary Naval aviator game that involves falling backwards off of bar stools) now that he is retired. And Slammer provides his opinion of plastic chairs. 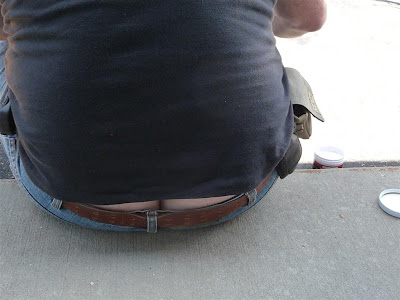 Maybe I should have been a plumber