It was a good morning. We had a fine breakfast buffet at the Lodge, with thick-cut bacon done as perfectly as at the Outpost Café, sausage links and patties, scrambled eggs, French toast, pancakes, biscuits and gravy. The orange juice tasted freshly squeezed.

I managed to get the blog updated despite not being able to connect to the WiFi. I wrote off-line in Word and got the photos lined up, then transferred them to Sherm's computer and posted from there. I was also able to check my mail, although checking out the VROC newsgroup was going to be more effort than it was worth for a couple of days. We'll be back on-line ourselves somewhere on Sunday evening.

With the blogging up to date, I took a few moments to wipe some of the encrusted bugs off Pogo while visiting with some fellow Aztec rallyists. It is amazing how, every time I get out a cleaning rag, people run to get cameras. I'm not the only one who doesn't clean the bike that often, but I have somehow become the poster child.

In the midst of this, Steve (Scorpion~) headed back for the Washington coast on his sinister black Harley Davidson. Steve is a laugh-riot and we enjoy any time we can spend with him. In fact, we expect to stop by and visit him in the next couple of weeks.

The rest of the people headed out in small groups to visit different parts of the Black Hills. Sandy, Sherm and I decided to make a short loop down the scenic Spearfish Canyon to the town of Spearfish and then swing of to Sturgis before heading back up to Lead. 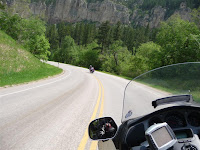 The entrance to Spearfish Canyon was under construction for a few hundred yards. Wed had to wait for ten minutes or so while oncoming traffic cleared the single lane section and a man with no hair on his head but a spectacular long ZZ Top beard moved his pint-sized excavator off the road. Once we were through the construction, we set out down the winding road at a moderate pace. In South Dakota, a 35 MPH curve means 50 MPH (unlike North Carolina, where 35 MPH often means 32). The canyon hasn't changed since I was last here, but the few facilities do seem to be expanded.

In the lower part of the canyon, we caught up to a log truck, but he wasn't our problem. He was behind an SUV that was following a silver car that was only doing 30 MPH on the straights and was braking for the corners. I couldn't see the plate but I was betting it was FLORIDA. Finally, in a short straight, we moved out to pass. The lady (it was a lady) had, predictably, sped up. I don't know if she thought that was doing us a favour or whether she thought that was the way to drive but, after passing the log truck and the SUV, I was doing 85 MPH when I finally got past her and rolled into the next 35 MPH corner. 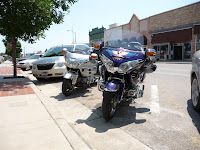 When we reached Spearfish, we took I-90 East at a good pace running tight formation and got off at the first Sturgis exit. After stopping at a Pamida store for water, snacks and books, we went to downtown Sturgis and parked across from Gunner's Lounge. It was much quieter than Bike Week and there was no problem finding a place to park. After a short walk down the street and back, we were back on the bikes heading back to Lead. I did Bike Week once and, with all the crowding and people, that was enough for me.

We rode through downtown Deadwood and Sherm wanted to stop and get a picture of the No. 10 Saloon where Wild Bill Hickock met his end, but there was no easy parking space so we decided to come back later. The ride up to Lead was nice with large, sweeping turns. 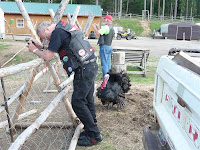 Back at the ranch, everyone else was still out on the road so we took it easy for a while. Jamey T., co-organizer, dropped by and the Colorado gang, El Nomad, Goofywizard and their significant others wandered in. El Nomad was having some problems with his Nomad, which he had brought instead of his Wing. It sounded to me like a sensor problem I had years ago and I directed him to a Tech Archive post I had made. Sherm checked out the wildlife while Tom the Turkey checked out Sherm. Soon after, Superman and his wife, son and son's girlfriend arrived from Nebraska. 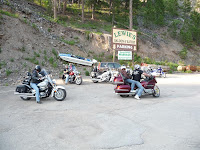 About 6:00, we rode the five miles down the hill to Lewie's Saloon & Eatery for burgers. Sandy and I were good and had salads with chicken. The ZZ Top excavator operator was at the bar and Sherm had a chat with him. He said our delay was, luckily, shorter than most. After supper, we headed back up the hill, with Sherm and I running a pretty good clip. In fact, Sherm overshot the Lodge turnoff and had to make yet one more U-turn.

We spent the evening sitting out front of the rooms visiting and shooting the bull. The rain started up, announced by thunder and lightning over the hills. One by one, people wandered off to bed and I finally returned to my room where I fell asleep watching more George Carlin retrospectives on HBO.
Posted by Jim "Skid" Robinson on 6/26/2008