We woke up about 6:00 AM and turned on The Weather Channel. Delaware was the south edge of a rain system that was moving east but the big concern was a large, highly organized mass of green, orange and red to the west. This looked like the large hail and damaging winds that yesterday's forecast said was bound for Chicago. Surprise! It ran south of Chicago and would be over US-23 to the south of us before we could get there. Lead elements were already hitting Lexington Kentucky, and the weather reader predicted "copious amounts of moisture". Time to invent a Plan B.

I moved the bike under the front awning of the motel, loaded it and brought in the rain gear so we could get suited up while we had breakfast. The other guests in the breakfast room were both curious and sympathetic. Someone came in and said it was raining harder. I pointed out that if we waited for it to stop raining here, it would just be raining somewhere else when we got there. I wrangled with the Zumo trying to get a route that would take us southeast quickly, hopefully so that we could get south of the incoming system before it caught up with us.

On our way out, the fellow behind the desk said a local police officer had stopped by and was wondering if our trailer was a pop-up. I told him to let him know it was.

We pulled out in light but steady rain headed south on US-23. We passed two Tim Horton's, one with a line-up at the drive-thru (made me feel right at home) and one that was brand new. I stopped for fuel and cursed the breaking of my own rule. When staying near a big city, get through the city in the evening so that you don't have to navigate morning rush hour traffic. That said, it wasn't too bad. We climbed onto I-270 which took us to US-33, the most southeasterly road I could find. Somewhere in here, we ran out of the rain.

My rant of the day is about the 95% of rush hour vehicles with only one person in them. It doesn't matter whether you are motivated by environmental concerns, cost or simply traffic congestion, this doesn't make any sense. But for all the talk, nobody really wants to change.

US-33 was a pleasure to ride. As with23, some was two-lane with very light traffic and some was four-lane. The sky was optimistic, light cloud with a few darker patches here and there. It was warming up pretty quickly, which can make full rain gear pretty oppressive. We reached the Ohio River and crossed into West (By God) Virginia. I almost rear-ended a car on the bridge when he stopped. In his defense, a construction flagman was holding a Stop sign in front of him. I was thinking about the Mothman Prophecies (look them up) but Point Pleasant is actually a few miles downriver. 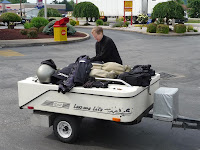 We stopped at a Mickey D's in Ravenswood for another breakfast bite, since we had shortchanged ourselves at the hotel. Sandy made use of the trailer as a folding table to put our gear away. I enjoyed listing to the WV accents the people were speaking with in the restaurant.

US 33 got us to I-77, again heading southeast through Charleston, with its gold domed Capitol building, and Beckley on to Princeton. There, at a gas stop, I was told the tunnels were fine southbound but were lane reduced on the northbound side. This was the case, so we'll come back through Tazewell to avoid them. On the minus side, as soon as we passed through East River Mountain Tunnel into Virginia, it started to spit rain. After Big Walker Mountain Tunnel, it got a little more insistent and, just after we turned onto I-81, I stopped so we could put rain suits on again.

A word about warm front rain. It wasn't the heavy, damaging stuff we were running from but it annoys the daylights out of me. The clouds aren't dark. They are luminous, bright, glowing and lightly spitting rain without end, but barely enough to wet the road. And so they did all the way to the Tennessee border. At which point they stopped. State line to state line. Very strange. 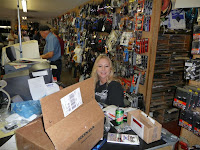 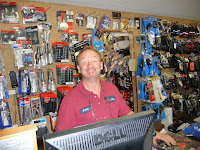 The rain was now stopped and the heat and humidity rose. We followed the GPS to Ken's Cycle Center in Gray, near Johnson City, Tennessee. They told me last week that they had a selection of Tourmaster Elite II rain suits in stock. Turns out they only had a few sizes and not the ones we needed, but Angela, shown here, called and ordered at least one of each size. Can't ask for more than that. They will be in by Friday so we'll take a ride back up (it's only 140 miles from KSL). Kenny, the proprietor, showed me the MadMaps Smoky Mountains Regional Scenic Tours Map (Part 1). It looked like something I needed so I bought it. We'll try a few roads we haven't been on over the next few days.

The Super 8 in Johnson City was off the main drag and not in a neighborhood to my liking. A stone's throw away, there was a Ramada on the main drag. The price was right, so we settled in. Then we took off our boots,put on our new Crocs (big, tough bikers that we are) and went next door for supper at the DQ Brazier.

While I was blogging and Sandy was sleeping, The Weather Channel was providing ongoing coverage of the severe weather north of us. It looks like we missed the bullet today, but Kansas City to Indianapolis to Central Ohio and right through to Washington DC are getting beat pretty bad with thunderstorms and twisters. Minute by minute, they are calling more watches and warnings. Is it my imagination or is the severe weather getting more frequent?

Our forecast tomorrow looks pretty good,with rain north and east. We are going south and west. But can we trust the weatherman? We'll see.
Posted by Jim "Skid" Robinson on 6/03/2008