We were up at 6:00 and ready to roll at 7:10. Packing was a chore since it was only the second time we had loaded the trailer and we hadn't found a rhythm yet.

We said goodbye to the few who were up and headed out with a beep of the horn. The road was foggy and a bit cool, a typically very quiet Sunday morning. We passed a rabbit sitting in the middle of the road near Bryson City and I clipped what looked like a box turtle with a trailer wheel over near Sylva. I feel bad about that.

Approaching Waynesville, we saw two police cars on our side of the road, one state and one local. I was slightly over the limit as, just then, a white SUV drove past me at a fair clip. Both cars pulled out and passed us, pulling in behind him. The strange thing is that they followed him for a ways before lighting him up. I'm not sure if they were just running the plate or if they had been looking specifically for this vehicle. We were by them and gone before we could see what kind of stop they were doing.

Near I-240 in Asheville, we came out of the fog into a clear, sunny day. It was quiet and most drivers seemed to be either going to church or driving trucks. We stopped at a Mickey D's on the south side of Johnson City. Sandy was disappointed that they didn't have any hot chocolate.

As we were outside after and I was spraying some contact cleaner on the Zumo contact strip, a local gentleman struck up a conversation. In the course of talking, he asked if I was an Iron Butt Rider. I told him no. He introduced himself as Jim Culp, IBA #88. This is a significant number considering they now have about 34,000 members. His current ride is a '94 Wing with 200K miles on it, but he describes himself as an episodic rider. He doesn't ride that often but, when he does, he doesn't stop much. I looked him up when I got home and he finished the big ride with a silver medal in 1995 and finished again in 2001. That impresses me a great deal.

At the Virginia line, we encountered our first cloud patches. These continued on up I-81, I-77, US 19 and I-79 without much change. I noted that the south I-279 interchange below Pittsburgh is still marked as a construction zone and that I-79 north of McKee's Rocks is still single lane. These guys work as slow as Ontario does. It was 95F at 5:30 as we rolled by Pittsburgh and still 90F at 6:00 PM. I-79 maintains its reputation as the main dead deer road we know, with a large number of fresh carcasses all along its length. These are good sized deer, too. 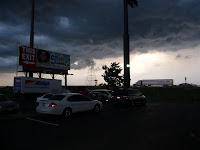 About 20 miles south of Erie, we encountered a mile or so of wet road and could see the clouds off to the east that had done it. After we checked in to the Comfort Inn in Erie, the sky changed, the wind came up and a thunder storm blew through while we were going for supper. Erie was spared most of it but the severe storm warning kept beeping on the weather channel and the radar showed the place we saw the wet pavement had, later, gotten the worst of the storm. It's all a matter of timing and luck.

After eating a Bob Evans salad, we went to bed early.