We were rolling northbound by 7:30 AM, headed for Johnson City, Tennessee under clear, cool skies. There is a new style McDonalds in Waynesville, replacing the old one torn down after repeated health code violations. The girl serving us wore a Dale Earnhardt Intimidator shirt
so I felt right at home. Unfortunately, after I filled my coffee mug, I tipped it to see if the lid was on tight and poured hot coffee all over my hand. And the table. And what was left of my breakfast sandwich. Stella Lidback? Where are you when I need you??

After breakfast, we negotiated our way around new curbs to get back on US 74 and I-40. The rest of the trip to Asheville and up and over the state line on I-26 was uneventful. I was impressed by the amount of work they had completed since Wednesday. The crews back home could take some lessons.

We arrived at Ken’s Cycle and tracked Angela down. She had a large box of rain suits just delivered and started going through them. The XXL jacket and XL pants fit me fine. Sandy liked the XS pants but, after finding the S jacket too big, couldn’t find the XS. The invoice indicated that the XS and XXS jackets were being shipped from California instead of Memphis and wouldn’t be in for several days. Too late for us, but we now know the size so we can order on-line. Ken talked to us for a bit and we said we’d drop by the next time we were going through.

One thing I forgot to mention when we went through Johnson City the last time. I saw a black school bus that looked like the one I posed by at Bristol years ago. This time, the bus was all black except for a green marquis that said “Teresa Sucks”. NASCAR fans will understand.

Heading back south on I-26, we stopped at the Wal-Mart Supercenter in Unicoi; one that the GPS didn’t know was there. We bought another camera case and Sandy found some specialized underwear for riding. Ask her about them the next time you see her. I talked with a lady working there named Alice. She and her husband are RV people. 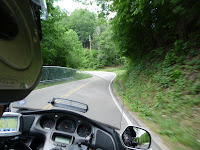 From Unicoi, we headed a bit more south and then took a back route over the state line. We got off at Exit 9 and the GPS told us to follow Cedar Branch Road. This was a one-lane asphalt path that looked like a driveway disappearing into the trees. I had faith and, after a mile, it dumped us on Tennessee 352. This road wound its way up to the state line at the top of the ridge and then, after becoming NC 212, wound down the other side. This is a quiet area with old homes and mobiles, very green and sedate. I think we saw ten cars in 20 miles. 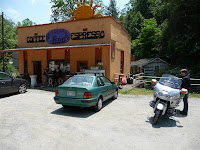 It was very hot and, when we got to US 25 and found The Steady Eddy coffee and espresso shop out there in the middle of nowhere, we had to stop. The sole proprietor, a friendly young lady, made a couple of excellent strawberry smoothies while we talked about the challenges of running a small business in the North Carolina mountains. 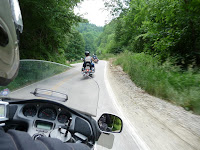 After the smoothies, we headed west on US 25 to a little town name Hot Springs. We turned south on NC 209, passing two cruisers on the way out of town. The road was very tight and very technical, with occasional bits of gravel in the corners. After a while, I slowed down and started cruising. Before long, the others caught me and I pulled over to wave them by. The first one pulled up, slowed and asked if we had gotten the rain gear. I took a closer look and saw it was Bruce and Gail, who had their trailer next to us at KSL, on their Vulcan and friends of theirs on a Harley. We rode together down toward Maggie Valley where we caught US 74 back to KSL. At the 74/28 split, we got rained on for about two minutes and, boy, did it feel good! 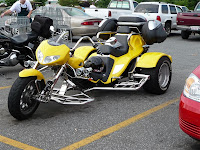 It was hot, hot at KSL so Sandy and I headed into Robbinsville. A few minutes at the air conditioned library let me get my mail and newsgroup messages. Then we stopped at Lynn’s Place for a light meal and discovered that there was a WiFi signal from the county building across the street. The NC Baptist Men Disaster Relief gang (we saw their bus yesterday) was also there, and I met a man with a 2005 silver Wing from Alabama. He had owned a Nomad and was familiar with VROC. Then we stopped at Ingles for water and saw this unusual yellow VW powered trike. 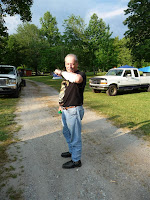 Back at KSL, the clouds caused the light to be distinctly yellow. Flip and Renata and Traveler (one L) had arrived and Roger the Grouch was modeling some new tape after a mishap where he lost concentration on a corner for a critical moment. Luckily, he and the bike only suffered minor damage. We called Sherm to say Hi and skipped supper because we were still full from Lynn’s.

After supper, Mark, AKA Cheap Bastard, his son John and two grandkids from 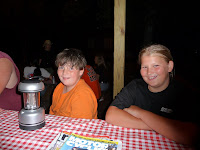 Slapout, Alabama (really!!) arrived. Weldon is John’s son and Elyse is Mark’s daughter’s girl. Elyse is a big fan of horses and particularly likes the Paso Fino breed. Mark is full of questions about everything under the sun. 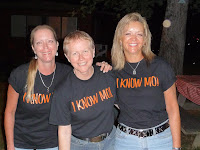 Kelly (Thrillseeker), Sandy and Mean Susan modeled their I Know Mo T-shirts. People stayed up and talked for a while, slowly drifting away as they reached their limits. We decided we would try a group ride after breakfast in the morning. Flip and Kelly were the last VROCers keeping Mo company at the fire when I turned in about 1:00 AM.