Ike moved past us to the west while we slept and was now gracing Ontario and Quebec with rainfall. Reports were coming in of wind damage and power outages along his path through the US.

I made my daily GPS error early. Leaving the hotel, I didn't realize that the route carried over from yesterday had a via point back along I-88, and the unit tried to send us back east. I caught that but, before I could get it straightened out, we ended up on a stretch of I-81 northbound with no exit for five miles. And a rain shower moved in on this stretch of road before we could get back. Not a good way to start.

Finally, I got us on SR 17 West, a good four lane road. Then we took US 220 south and US 6 west, very nice roads where we dodged among raindrops, never quite knowing where the road would take us as we watched the showers over the hills. South of Troy, Pennsylvania on SR 14, we got the worst shower while following a dually pickup truck with Alberta plates doing 20 MPH under the limit. A Wing's ability to keep the rider dry depends on speed, so we weren't very happy with this guy. In fact, I though "Damned Canuck, clogging up our highway". Maybe I'm spending too much time down here.

SR 14 merged with US 15 south to Williamsport, where severe rain had just passed through. Turning west on US 220, we put the bad weather behind us and continued under partly cloudy skies. In Altoona, we stopped for lunch and gas. The roads were arcane, the McDonald's was closed for renovations and the gas station was almost impossible to get to. I really dislike Altoona. 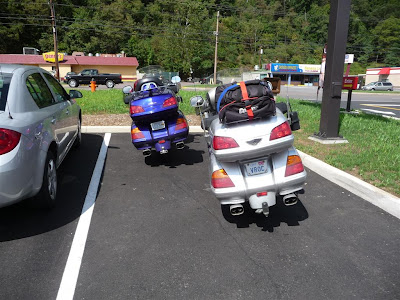 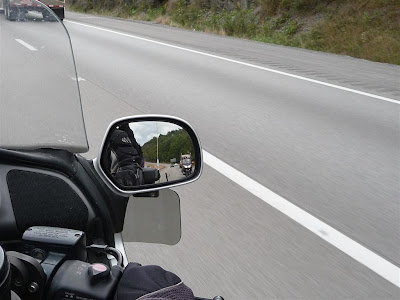 Tom in our mirror
US 220 took us on south to I-68 in Maryland, where we went west again to Morgantown, West Virginia. There we caught I-79 to Charleston, stopping in Jane Lew for $4.05 gas. Despite falling oil prices, Ike has given them a reason to crank the gas prices up again. Motoring across Charleston, we got a Super 8 room in Dunbar to avoid the morning rush. Our window here had a screen, so we had to carry our gear around the long way. Going back to the desk for more coffee supplies, I met two CMA riders from Erie who were heading for Nashville. One was on a Nomad and said he was the Pennsylvania head of Riders of Kawasaki (ROK). I explained that we were undercover Vulcan Riders and Owners.

After some discussion and a foot patrol of Dunbar, wed decided to ride back to TGI Fridays in Charleston. Tom led and made a GPS error, resulting in a tour of the WV State Police Headquarters parking lot. Sad to say, I felt better now that I wasn't the only one to make a GPS mistake.

I led the way back in the dark and Sandy and Tom went to sleep early while I posted bills and sorted photos.
Posted by Jim "Skid" Robinson on 9/15/2008