I got an Email from Terry, Freedom Riders President, late last night. He wondered if anybody wanted to go for a ride to Sturgeon Falls for lunch today. It was cool and overcast, but any ride is a good ride.

Sandy and I put on warm gear and headed over to Petrocan at LaSalle and Barrydowne for fuel. Topped up, we were heading for the Tim Horton's at Levesque, the meeting place, when we pulled right out in front of Terry, who was on his way to the rendezvous point.

At Tim's we waited a bit, but it became obvious that we were all that were coming. This would allow for a more spirited ride than we could have with a larger group. I enjoy riding second to Terry because he moves right along and, after nearly thirty years, I am always sure of what he is going to do in any given situation.

We motored 55 miles east on Highway 17 to Sturgeon Falls. We were the first people at the Chinese Buffet, which had just opened for the day. They don't have a really large selection, but what they have is hot and good. I know I ate more than I should have. 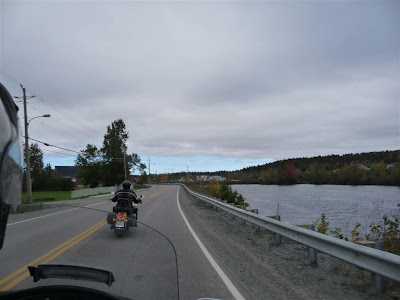 After eating, and not willing to call it a day despite the cool and overcast, we decided to ride north on Hwy 64. The photo shows us riding alongside the Sturgeon River coming into the little town of Field. You can see the patch of blue that kept taunting us. We never were able to catch it. 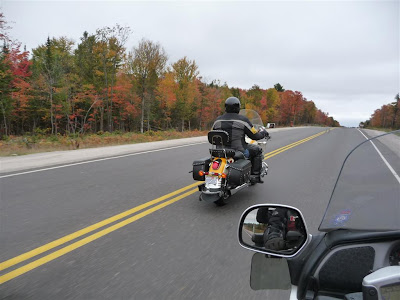 I first rode this north section of Highway 64 back in 1971 on my 350cc Yamaha R5. It wasn't paved back then and, since I earned the first part of my nickname crashing on gravel, I wasn't a big fan. Now it is a very nice piece of road with nice sweeping curves and very little traffic. What traffic there was didn't stay ahead of us very long, since Terry's motto is "Pass first, ask questions later".

You can note in the above photo that: a) the leaves are changing colour, and b) Terry's '99 Valkyrie is one sharp looking bike.

We reached Marten River, where Highway 64 ends when it encounters Highway 11. This used to be a major location in the fur trade, even boasting a trapper's museum, but now it is just an excellent place for outdoors enthusiasts to get away from it all. From Marten River, we turned south on Highway 11 heading for North Bay. You can see that they've been resurfacing the road and haven't gotten around to painting in the centre line yet. The rock cut, a small one, is typical of Northern Ontario and the leaves continue to change.

I had one pass along here that could have resulted in seizure of the bike if the appropriate authorities had been around. They only allow 50 KPH over the limit before you forfeit your vehicle and licence for a week. Fifty over comes very easily, especially if you are following a fast moving Valk. Working traffic as a pair was enjoyable, though. I think we have more skill at this than most. 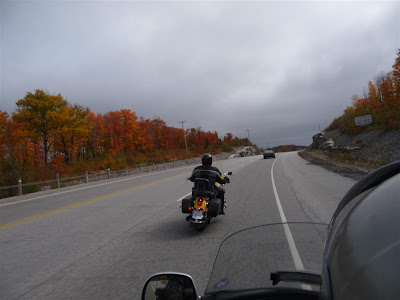 You can see that, coming back to Sudbury on Highway 17, the blue sky was nowhere to be seen. It started getting ominous there for a while, but we got home dry.

I don't know how much more of the season we will be able to get out for day rides, but this was an enjoyable jaunt and we'll take as many more as we can get.
Posted by Jim "Skid" Robinson on 9/26/2008