The first day of the last trip of the season.

The day started off with some thoughts back to this date in 2001 and how the world changed on that day.

I started early and posted the Freedom Riders books. I've been putting the job off for no particular reason but, if they are posted, I can generate the statements while I'm on the road, perhaps getting them out before the meeting Sunday morning.

After getting the books done, I packed in my usual five minutes and then checked the bike. The tires were both reading low, probably a result of the 8C temperature. I topped them up in any case. While I really like these Avon Cobra tires for grip, they look like they won't last all that long. That will make for a tough decision when it comes time to replace them.

Leo called while I was checking tires. He'll ride with us for a ways. Mattawa, he thinks. That's 120 miles east.

We left at 9:15. The temperature had climbed to 13C and we faced a rare east wind. Whichever way I go will determine the (head)wind direction. Riding was good and, in Mattawa, Leo decided to continue on another 60 miles with us to Deep River.

Highway 17 between North Bay and Deep River is a mixed bag. There are a lot of stretches of new pavement that is excellent. Between these, old pavement isn't broken but it is very rough and choppy. Makes for an interesting ride. 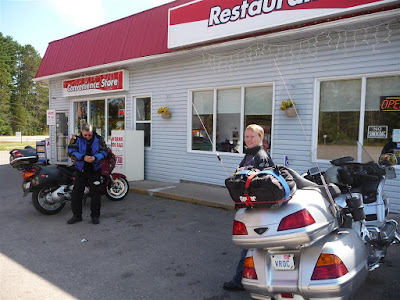 In Deep River, we fueled at the Petrocan and then decided to eat in the attached restaurant, which none of us remember seeing before. Toasted westerns, fries, and I had chicken gumbo. Thanks for getting the tab, Leo.

After lunch, the red BMW headed home and we pushed on. Immediately, we found the first one lane construction zone. This was the first of many, all the way to Arnprior. I guess if we want the roads improved, this is what we have to put up with for a while. I did notice that the attractive young ladies who usually flag these stretches were missing, replaced by much less attractive guys. Maybe they went back to school?

The O.P.P. have started patrolling highways with aircraft again. They have marks painted on the highways, but only in very limited sections. Today, I realized that each one of these sections has "Patrolled by Aircraft" signs at each end. That will make it easier to know where they are and adjust speed accordingly.

Ottawa was busy. I almost got clipped on a lane change when a car sped up right into a spot I was moving to. Other than that, we got through without incident. On 417 east of Ottawa, we noticed they have moose and deer crossing signs displayed together. This is the only place I've seen this.

We got off 417 near Casselman and too 138 south to Cornwall. All the road work in town is now done and is it ever nice. The Days Inn had a room, but the Jazz Magnolia, the restaurant next door, had closed. It was now a training facility for three high school hockey teams who attend boarding school and live on the second floor of the Days Inn. Things never stay the same. 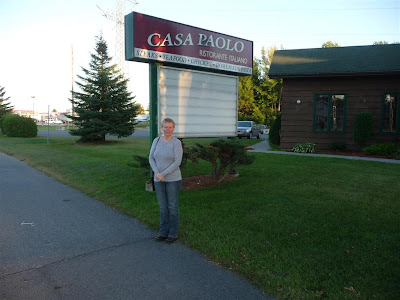 Luckily, Casa Paolo was right across the street. It is well furnished, the staff are efficient and friendly and the food is good. A bit pricey but, in this case, you get what you pay for. 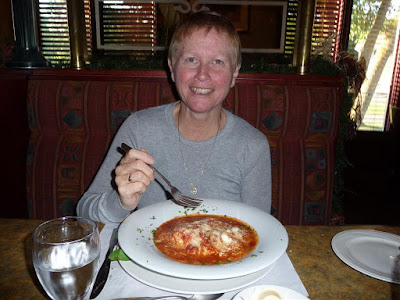 We had rolls (light enough to float off the table), Caesar salad (just the right amount of bite) and home baked lasagna (superb) which Sandy is enjoying above. This was followed by one lemon mousse, which we shared.

Then it was an evening of paperwork, blogs, photo cataloging, bike club books, route planning, etc. I'll try to get to bed as early as I can. Tomorrow, we get to try out our new NEXUS cards.
Posted by Jim "Skid" Robinson on 9/11/2008