We were up before 6:00 AM. The radar showed that the rain from the west was almost upon us. We had a quick breakfast next door where the Jazz Magnolia restaurant used to be. Fruit and a muffin despite the full hot buffet laid on for both the guests and the you hockey players, but we have to watch our weight. Then it was on to The Border.

I stopped first on the Canadian side to see how to enroll in the Traveller Declaration Card Program so that we could still use a Canuck NEXUS lane if we had something to declare. Cornwall has no NEXUS lane and so, while they had heard of the program, they could not help me. On to the US side.

We entered a regular lane and presented our shiny new cards. After a moment, the agent asked me if I crossed the border a lot. I acknowledged that I did. Then he asked if I ever had trouble crossing. I told him not until last Tuesday. He said they would have to do some things to clear the alert my name had generated and directed me to the side while he took our ID's inside. Once inside, I had to fill out a written declaration and then I opened the various luggage containers while an agent did a cursory search. Then they set us free. In fact, they seemed almost apologetic about having to bother us.

It looks like this stop and search thing is going to be a regular feature of our border crossings from now on. The CNN article last month referred to James Robinson's having trouble flying. It looks like that data has now been connected to the land crossing terminals as well.

Across the border, we ran east under grey skies. Between Chateauguay and Champlain NY, there was a guge new wind farm. I saw at least 50 large wind turbines where, only a tear ago, there had been none. We continued on to Rouse's Point, crossed Lake Champlain into Vermont and then worked our way over to I-89 south.

From 89, we went across country on Vermont 104 and Vermont 15. This road wound across the countryside in a most pleasant fashion. The only problem was a minimum of places one could pass, especially since the green Vermont license plates mean that the driver is in no hurry. Vermonters are very polite but they never seem to hurry.

Just before we reached US 2, the rain started. It had been cool and damp all morning, but we were lucky up until now. We stopped at the intersection at Joe's Pond Cafe, a small operation with gas pumps that said "Pay First! Unless we know you." While getting the rain gear out, we had grilled cheese sandwiches and coffee. Fed and suited up, we continued on.

The rest of the ride was wet, but uneventful. US 2 when you enter Maine is the worst pavement I have seen in a long time but, as you approach Bethel, major roadwork is underway. We road some wet, greasy mud for a little bit but I'm sure it will be very nice when it is done.

There were no bikes at the Sudbury Inn in Bethel when we arrived at 2:00 AM. I checked the date, went inside and found we were the first to arrive. Joe and a group arrived soon after, while U-Turn and Tom Miller weren't far behind. 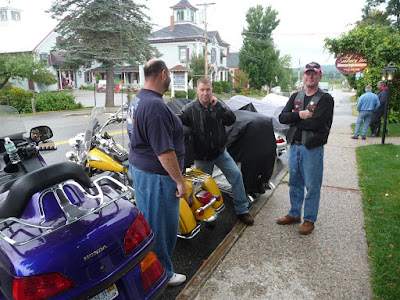 Steve Cifra, U-Turn and Brother Bear outside the Sudbury Inn
More arrived as we adjourned to The Suds Pub downstairs for "fruity rum drinks" and some food. This will be out home for the rest of the evening. 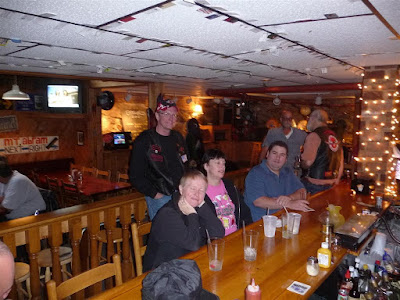 Sandy, Brother Bear, Laurie, Rick, AC and Morrey in The Suds
Sherm called from Holbrook Arizona as I was typing this. He's with the Foree's and will be planning a route to Eureka Springs around Hurricane Ike.

Sandy and Jim well mostly sandy, ride safe behave and see you soon, we found no strangers under tables at our Bash the next day so all is good. If you ever want a place for a V Rock North as long as we can get the tent my backyard is a possibility. As long as I get invited!
Doug & Carol and the V