The day dawned overcast and foggy with a somber grey drizzle setting the tone for the memorial service. It was delayed due to concerns about the fog affecting the memorial ride afterwards, but got underway about 9:00 AM. Moon kept it light on the religious side as we took a moment to remember all the members who have passed on. The addition of X, CYborg, Chuck Burt and Kilo this year made it particularly sad.

To finish the memorial, we climbed on our bikes and, led by a Sheriff's car, rode to Berryville and up a hill overlooking the countryside. In this special setting, Moon said a few words and they cast some of Kilo's ashes to the wind as Southern Draw sang a haunting song. It was extremely moving.

Coming back down, a few of us bypassed the IHS and headed on through Eureka Springs to the Smokehouse Restaurant. Teri Conrad (of Kawasaki) rode with Sherm and we were joined by Stewey, Cheap B and CC Rider. The Smokehouse has huge biscuits, one per diner, and gravy. Many of us opted for country ham, and the lady serving us, 71 years old, is the same one who has family in Chatham, Ontario and who washed my glasses last time I was here. Note to self: bring and old Ontario licence plate next time to hang on the wall.

After breakfast, the others headed back to town while Sherm, Teri, Sandy and I made another loop out by Beaver Dam. We stopped at the dam site overlook and also at the beautiful Thorncrown Glass Chapel. Then we returned to the Stables, having maintained a stately pace the whole time. 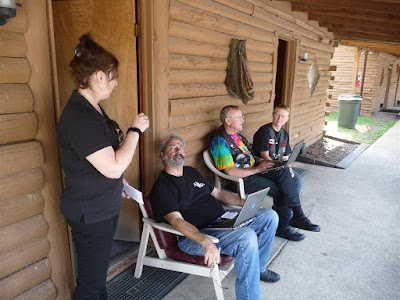 Teri Conrad has Lucky Al's attention while Sherm borrows WiFi and Sandy looks on
One of the strangest machines I have ever seen wandered through the IHS parking lot this afternoon. 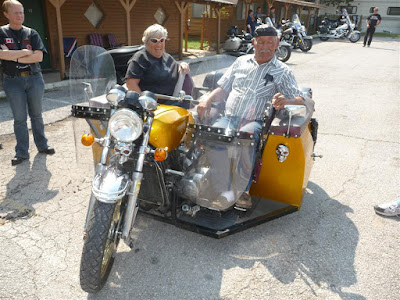 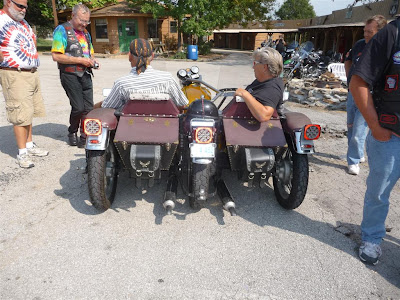 The original bike was a 1976 Honda GL1000 GoldWing (it was one of the LTD models) with a GL1100 motor put in. The outriggers use two separate motorcycle swingarms and the wheels are newer (1981 vintage) Comstars. The pipes are from a Harley with glass packs and have a unique rumble. Driven from the left, the throttle and brakes are floor pedals while the shifter is a lever with the clutch lever attached to it. There is a tiller for steering. All in all, this is quite the conversation piece. 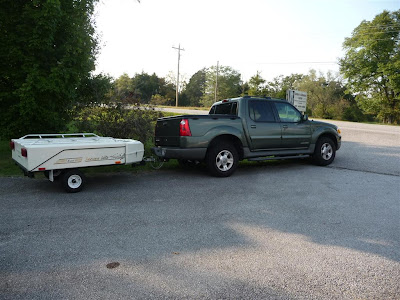 Ron and Wild Rose arrived from Georgia in their truck to pick up the Lees-ure Lite trailer they had bought from a man in Oregon. Sherm and Chunk both had parts in delivering it to Arkansas. While Sherm worked on wiring the electrical plug, I gave Cheryl a quick demo on setup and teardown. Then they hooked it to the truck and we all adjourned to the Sheridan Ozark Buffet for supper.

After supper, we said goodbye to Slammer and Stewey, who were heading back to their respective hotels and would be departing in the morning. At the IHS, we spent the rest of the evening chatting, subdued because this is the last gathering of the year for many of us. I visited with Kiwi Don for a while. He's a neighbor of Jazzman back in New Zealand and is on a several month long trek across North America. On a previous trip, he rode north all the way to Deadhorse and Inuvik all by himself. Although he appears unassuming, there is a lot more to Don than meets the eye.

We also spent some time admiring the huge Arkansas spiders building webs around various parts of the buildings. Scary looking, these are harmless while the deadly brown recluse doesn't look threatening at all.

I turned in relatively early, hitting the sack about 10:30 in anticipation of an early departure tomorrow.
Posted by Jim "Skid" Robinson on 9/20/2008