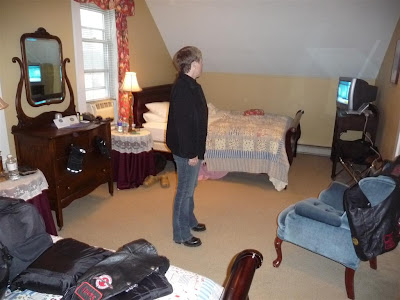 Room 21 at the Sudbury Inn in Bethel, Maine
We were up at 5:30 AM studying The Weather Channel for any information on Hurricane Ike. It was moving ashore very slowly in the Galveston/Houston area and our concern was that we might encounter it early in the week as we move across the country to Arkansas.

I spent the early part of the morning working on an analysis of the Freedom Rally financial results to send to Terry so he would have it for tomorrow's meeting. I took the computer down to breakfast where the early crowd commandeered the big round table in the middle. I had a carnivore omelet (lots of meats) and Sandy had blueberry pancakes. Both were good but she wasn't able to finish hers because of the size of the serving.

After the rain yesterday, and the washout of the ride last year for all but the most determined riders, the good forecast today was welcome. We were supposed to depart from the Irving gas station on US 2 east of town. Keith K was the ride leader, as usual, and we were only a few minutes late getting underway. 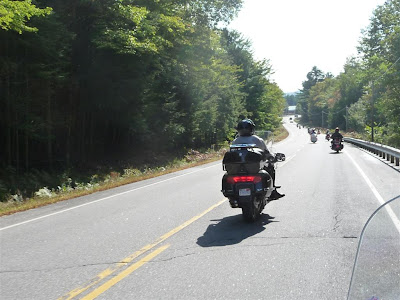 The group conducted itself quite well. I tried to do a map, but I accidentally wiped my trip log on the GPS and there is no way I can figure out where we did go except to say that it covered a lot of Maine back roads. Many of the roads showed severe frost damage, which was what caused me to start looking at after market suspensions two years ago. The ride on Traxxion was a lot better this time around. On the plus side, I did see evidence of a lot of road rehabilitation. Certainly a lot more than I see back home in Sudbury. 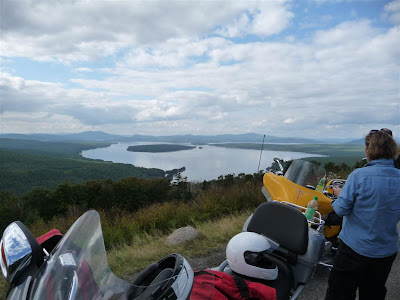 Near the end of the ride, we all stopped at what they call Height of Land overlooking Mooselookmeguntic Lake. Maine names are even better than Northern Ontario names. 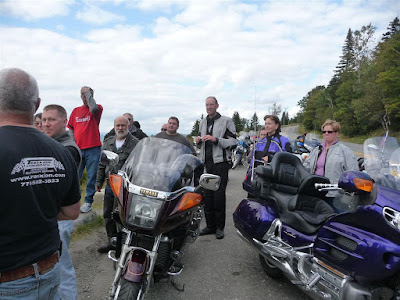 In this beautiful spot, I said a few words and cast some of Kilo's ashes (brought by Steve C) to the wind. Since this was my first time scattering ashes, I'll share a tip with you. I was chagrined but I'm sure Kilo would have laughed out loud when I neglected to check which way the wind was blowing. Sorry about that, Mark. And Ray. And Chris.

Back at The Sudbury Inn, we found a large gathering of people preparing to celebrate a 60th anniversary. Multiple generations. It's a good thing that, while on the road, we had phoned to make dinner reservations that we forgot to do first thing in the morning. I'm not sure how the anniversary crown felt about seeing the horde of bikers pull up, but we were on our best behaviour.

We killed some time at The Suds Pub and then were ready for our seating at 6:45. Brother Bear and Laurie, their nephew Rick, Brad and Judy, Don (new guy), Sandy and I made up our eight. Sandy had a chicken dish while I selected the sirloin steak. Food was good. Unfortunately, we were all put on one bill. Rather than fuss with it, we just divided it by eight.

While dining, Don told me that he wasn't a Donald. It was Don as in Spanish nobility. Or, I countered, Don Corleone. So I christened him The Godfather. I think it's a fine nickname. We'll see if it sticks.

It was apparent that the ride must have tuckered out most of the people. A few of the regulars set up a poker game in the breakfast room, some of us talked bikes for a while and the rest disappeared. I was one of the last to turn in at about 11:00.
Posted by Jim "Skid" Robinson on 9/13/2008