We got up a little later this morning. Just over 300 miles to get home and the last day of the season. We had the continental breakfast in the large breakfast area and then packed up in a leisurely fashion.

The Weather Channel said it was near freezing in parts of New England, but we had a balmy 8C as we started north about 8:20. I was glad the beaded seat cover was in the saddlebag, avoiding the chilly breeze under my private parts. My microphone stopped working soon after we started out, so I didn't have much to say as we rolled along at five over the 70 MPH limit.

We made a gas stop at the BP in Indian River and I put Deoxit in all my headset connections. And I was back. Unfortunately, the lower plug that connects to the bike harness has been falling out lately and seemed to be even slicker after the treatment. We fixed this by wrapping a Band-Aid around the connection and I used the middle connection to unhook from the bike. I'll need to find a proper fix before next season.

As we approached the Mackinac Bridge, I didn't feel any of the twinges or trepidation like I usually do. Instead, I was actually looking forward to the crossing. I'm not sure why it was different this time but I sure did enjoy the sensation. When we got there, the wind was behind us, leading to a peaceful transit but I was ready for the wind. The right lane was being worked on and they moved us to the centre grated lane. No problem. I got playing on the grate using the patented Craig Scott weave and, when the paved lane opened up, I stayed on the grating. No tension, no worry about the height. I wonder if this was an anomaly or if I've turned a corner? 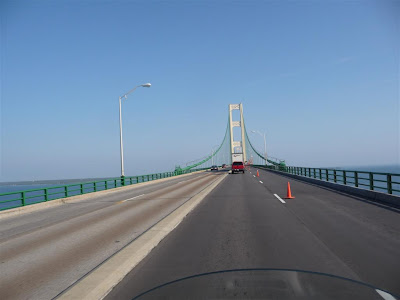 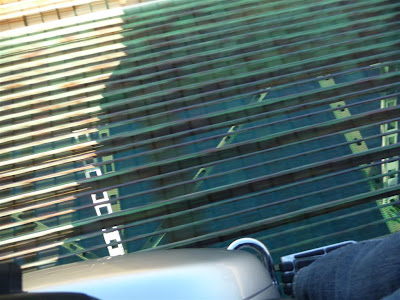 Looking down through the grating 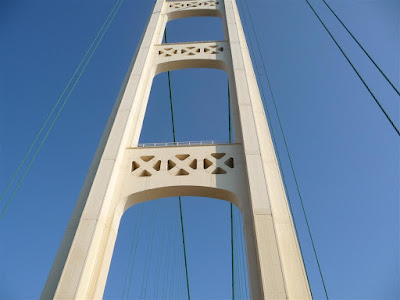 One of the awesome bridge towers
In the Upper Peninsula, the road is very straight. Almost like Nebraska. About the only interest we had was looking at the foliage starting to change. In a couple of weeks, this will be awesome. 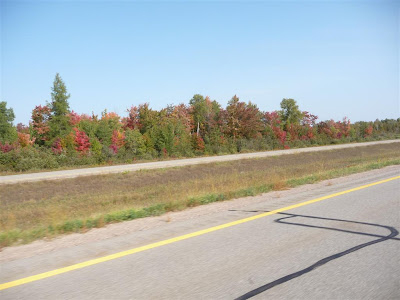 Some fall colours starting along I-75
We took on fuel in the Soo at $4.09 per gallon. Pricey, but after hearing on the radio that they were encountering gas shortages in the southeast, we're happy to have it. The Canadian Customs booths were backed up as they seemed to be spending extra time questioning people and a high number of vehicles were being pulled into inspection. There was a Natural Resources Conservation Officer checking US bound cars and a large number of Border Officers inspecting cars and trucks. Something was afoot.

Of course, being on the US Watch List causes me no problem on the Canuck side. Sandy gave the officer our Nexus cards, he asked about things we had acquired (about $150 worth, all from the raffle) and then he welcomed us home.

We stopped to see Mom and she made grilled cheese sandwiches and vegetable soup. We had a nice visit and an excellent lunch. Then we headed on east.

When we started this morning, we had a temporary tailwind, but that changed and we again were, as Seger says, against the wind. This beats all statistical probability but we're used to it. The poor fuel mileage on this run might be attributed to wind, temperature and speed but I'm starting to wonder if there might not be a problem with one of the FI sensors, possibly the O2 sensors in the exhaust. At over $150 each, I'll want to check them out carefully before doing anything drastic.

The last three hours home was pretty typical. We passed slower traffic and not much passed us. 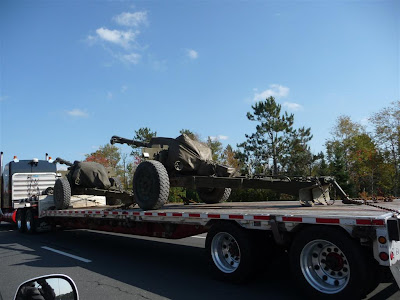 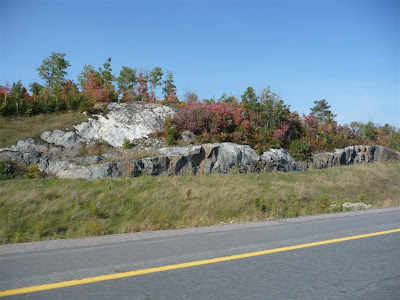 Trees changing on the Pre-Cambrian Shield
Sudbury looked the same. Despite increased fuel prices and shortages in the US, I paid $1.259 per liter in town, down from when we left. For those who were concerned, the grass had been mowed recently so I guess Rory was here.