We had a fine full breakfast buffet at the Ramada this morning. We'll recommend this as a place to stay when we're in town, a bit more expensive than some but the service and food were also above average. We upgraded the Zumo software on both units last night to the latest operating systems and are good to go for awhile. 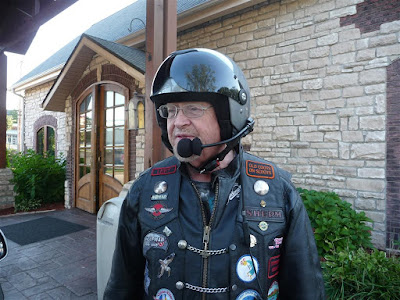 Sherm in front of the Ramada in Branson
The long 54 mile ride down through Blue Eye to the Iron Horse Stables between Berryville and Eureka Springs was quite pleasant. There were many familiar faces when we pulled in, which is a good part of the fun associated with our gatherings. On the way down, Sherm's FI light came on again but the bike continues to run just fine. 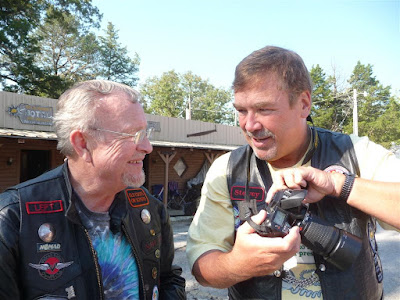 Stewey shows Sherm a picture on his fancy camera
After getting our gear into Room 2 and waving goodbye to the 'official' ride of the day led by Lucky Al, we headed out accompanied by Coyote (from Texas) on his new Kawasaki Concourse 14, a real serious sport touring bike, in search of Cycle Gadgets. They are a mail order house up on SR 187. The roads were a lot of fun getting there, sweeping corners punctuated by tighter turns. We found the place right next to a KOA campground.

Cycle Gadgets have a small showroom but we were invited to wander their warehouse. I found an upper J&M cord to replace the one I have with a broken right speaker wire. Coyote found a pair of rain gloves. Sherm bought some Plexus plastic cleaner for Shelby,and then he talked communications gear with some scooter riders who pulled in. This year, instead of Corvettes, ES is infested with Burgman and Silverwing riders here for their Scooters in the Ozarks rally. Then another VROCer, Duck from Illinois, pulled in on his GoldWing. 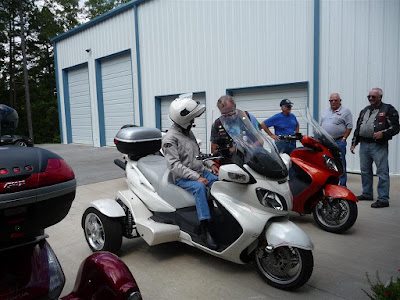 Sherm discusses scooters at Cycle Gadgets
On the ride back, we stopped at the Beaver Dam overlook. They have some serious beavers here. Then we hauled along more of the same kind of roads back to town, grinning all the way. 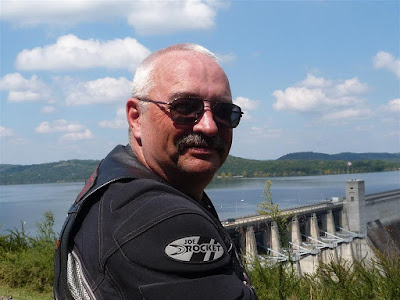 Skid at the 'Beaver Dam' overlook
Back at the IHS, we realized that we had missed our ice cream stop, so a few of us rode back into town and had ice cream. Then we went back to The Stables, via Walmart, and visited until it was time for the supper BBQ. Things weren't quite perfect because the cook quit during the BBQ phase and a large quantity of the pulled pork and beef were lost.

More visiting and then Rainman and Six Pack convinced Sandy we needed another ice cream run in the dark and shamed me into leading the way. Sherm and Chaz joined us, with Chaz continuing on home for the night. 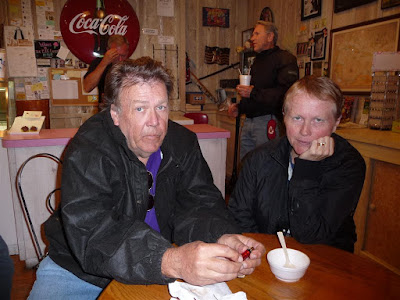 Six Pack Jack and Sandy at the ice cream shop

After we had ice cream and/or cobbler, Sherm led us back to the Iron Horse where we visited some more with old friends and new, with people eventually wandering off to bed. Flip and I were the last to to turn in about 1:00 AM.
Posted by Jim "Skid" Robinson on 9/18/2008