We got up at 5:30 and had an early continental breakfast. TWC called for early fog but forecast highs in the unseasonable 80's for later in the day. We were on the road by 7:00 AM, still in the dark because it was only 6:00 AM ten miles west of us. 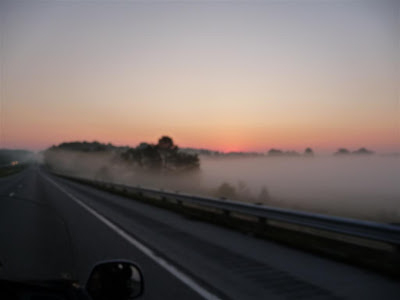 Daybreak over the fog on I-70
As the sun rose, I reached into my jacket for my clip-on sunglasses. These are now somewhere along the side of I-70 because I didn't get them clipped solidly the first time. I am wearing a clip from my old glasses, which are way too big but I bent to fit.

Travel around Indianapolis was uneventful and we found ourselves stopping at a familiar exit up in Warren, Indiana. I was happy yesterday to spend $3.39/gallon on gas in Missouri. Today, Terre Haute was $3.89 and Warren was $3.99. So much for my optimism about prices. Moving from the Mickey D's to the Marathon station, Sandy walked and I dropped her sheepskin seat cover out on the road. She retrieved it before a semi could run over it.

We continued on up to Lansing, Michigan and north on US 127. I scanned ahead with the GPS for a WalMart to get new sunglasses and maybe a seat cushion. It came up blank. No WalMart. Unheard of in civilized America.

This will be the last trip of the season. Although we are ready to go home, I know that a month or two from now the urge to head out on the road on two wheels will take hold and we won't be able to do anything about it until spring. The season was underscored by the maple trees, which have broken out in bright red hues. 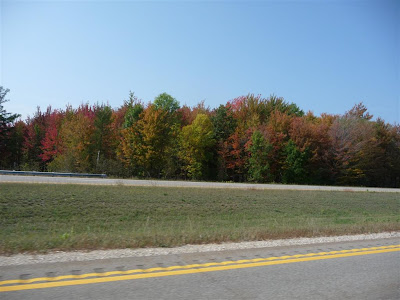 Trees near Grayling, Michigan
We stopped in Grayling at our favourite Days Inn. Nice rooms, great WiFi and friendly service for just over $50.00. The moose restaurant next door has new management, is now called the Canadian Steak & Fish Company and is open Mondays. Sandy had lemon garlic chicken with fruit and vegetables from the healthy menu while I had a steak sandwich with 3/4 pound of Angus beef. Very good.

The rear tire is down to 5/32nds after only 7,000 miles, reaffirming my belief that it will not be a high mileage tire. Unless, that is, it wears like an Elite 3 and gets tough down near the end. I won't bet on it, given the way other Avon's wear. The front is doing fine, though, and I can see a Bridgestone rear/Cobra front combination as a distinct possibility.

Sherm posted that he had a flat tire in New Mexico. He got the bike to Albuquerque to a dealership where they refused to sell him a 70 Series tire even though they had one in stock. They did mount an OEM sized 60 Series. Fear of litigation sometimes means the customer isn't always right.

I need to try to be more like Sherm with the camera. He looks at everything in terms of what he can put in his blog, so his photos document where he has been and what he has done. I often forget the camera and miss many opportunities, leaving our blog lacking. Next year. I will try to do better.

Norm posted that Barry Lacarte of Tri-town, STOP Officer of the Year, collapsed at the OFSC convention with a cardiac arrest and, revived by EMT's in the audience, is in serious condition in hospital in Toronto. If you can spare a thought or a prayer, it wouldn't hurt.

Jarvis pointed out it is the Autumnal Equinox. Tomorrow will be shorter than today and so it will go until almost Christmas. We settled in and watched the opening show of Dancing With The Stars. Still sorting out the contestants, but I have to give Cloris Leachman credit for trying out at 82 years old.

I've noticed that my right foot and toe have started to hurt again, just like they did at this time last year. It improved over the winter last time, so I'm not alarmed. Just curious as to whether this is a riding thing or a seasonal thing. I'm not a big fan of getting older and need to get back in the gym as soon as I get home. I told Rainman that I could drop 20 pounds by New Years.