We woke about 6:00 AM this morning to a forecast of clear skies and temperatures in the high 70's. It was still cool, but the prediction put us in a good mood. I took a bucket of warm water downstairs and wiped down New England dirt (rain) and Kentucky bugs. Loaded, we headed west on US 60 in the chill morning air. We soon had the pleasure of being in three states in a period of three minutes. US 60 crosses Ol' Miss into Illinois and we immediately turned left, crossed another bridge and found ourselves in Missouri.

US 60 was a nice four lane divided road for a long way. First, it was across Mississippi Valley flatlands with cotton plants, then into Missouri style rolling hills and pine forests. Near Winona, it went to winding two-lane road with passing lanes. Additional lanes were being constructed, so this good riding would soon be done away with in the name of progress. There was red dirt everywhere. I have to say I am impressed with the amount and quality of road improvements right across the USA this season.

I had given some consideration to taking the southern route, US 160, which winds its way along the south Missouri border. It is a fun ride. But a VROCer mentioned yesterday on line that it had been freshly chip sealed and so we opted to stick to the main route.

For part of the ride, we listened to Brother Larry on the radio. He was on a Gospel station but wasn't over the top about it. It sounded like he was older than dirt and the music he played, some modern, some Flatt & Scruggs bluegrass, was pretty catchy.

We took US 65 south from Springfield and arrived at the nice Ramada in Branson about eight minutes ahead of my stated 1:30 arrival time. Sherm was already in residence. He just started having a problem with his bike. The FI light was staying on, indicating a problem. We found out how to get the error code, which pointed to a problem with an O2 Sensor heater wire or a sensor failure. We also found that the bike could run safely in this condition. 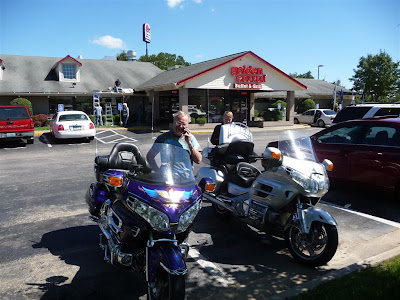 Unsure of exactly what to do about the sensor, we did what any good VROCer would do. We went out to eat. Here we are at the Golden Corral, where we enjoyed our Seniors Early Bird Special. Wow. Seniors. This being Branson, we also noted that even the Golden Corral has a dining showroom.

After eating, we rode south around SR 165 across Table Rock Dam and then stopped at WalMart on the way back to the hotel. At Wally World, Sherm got a seat pad like Ol' Phart and Tom Miller use and I got a can of Sea Foam gas additive.

At the hotel, we studied some sites and found the location of the O2 Sensors. Sherm found the offending one on the bike, wiggled the wires and wiped off the connector. Bingo, no more FI light. Damn, we're good.

I phoned Mom and we talked about the stock markets. Then we watched news, did blogs and Sandy showed Sherm how to get on Facebook. I still have to update the firmware in my GPS and do some other chores. Tomorrow, we go to ES.

N.B. - I'd like to thank Steve Cifra for the bottle of Deoxit for cleaning electrical contacts that he brought to Bethel. I put some on the pins in Sandy's headset cord and it seems to work well.

And, under the heading of wise ideas, I was in a BP station washroom in Elizabethtown yesterday. On the wall there was a light switch with a big red backing plate. It said that, if the washroom (rest room to you non-Canucks) needed service, throw the switch and it would turn on a light somewhere that would get someone to come and fix it. Excellent.
Posted by Jim "Skid" Robinson on 9/17/2008

Skid - I picked up your blog as I handle Marketing and PR efforts for Caig Laboratories and their DeoxIT line of products. I'm certainly happy to hear that you had success with DeoxIT. Did you know that we have a Emergency Kit that's available with many various DeoxIT products, swabs and wipes? This could be very helpful for you to have during your travels. Additionally, I noticed that you're a model train enthusiast. Try the products when you have conductiving issues on your tracks. You'll be pretty amazed at how well it will improve all of your electrical connections. If you didn't already know, you should be able to find many DeoxIT products at Radio Shack stores as well as online at various sites.
Best of luck with your travels and feel free to reply if you have any quesions. Thanks!
DeoxITDude