The wisdom of getting across Charleston became apparent as we headed west on I-64. Traffic headed the other way was jammed solid while we highballed it out of there at 75 MPH. Today, Tom was in the lead.

We passed a Rest Area I remembered from our last trip through here. It seems like it was just yesterday, but it was two years ago. How time flies. We made it to Kentucky before stopping for fuel, hoping the prices would be more reasonable here. No such luck. 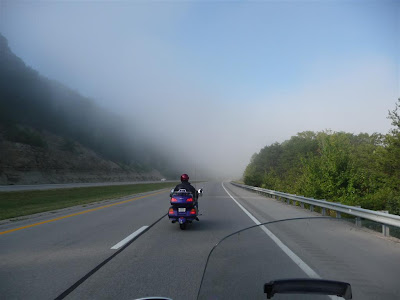 Fog bank or low lying cloud on I-64
We continued on I-64. With the exception of one localized fog bank, everything was clear. In Lexington, we took the New Circle Road by-pass around the north side of the city. The GPS makes this easy, unlike the time two years ago I had to navigate by map. It's funny that the Interstate doesn't have a direct connection to the Blue Ridge Parkway. 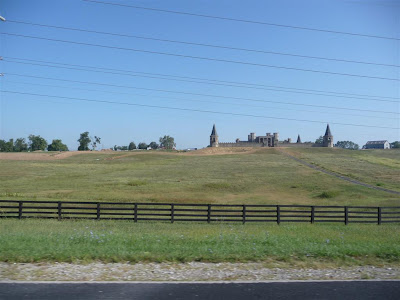 On the west side of Lexington, we passed Martin Castle. Quite an interesting place. Then we headed west on the Blue Grass Parkway to Elizabethtown, Tom's home. After fueling, he took us to the house he built with his own hands. It's a very nice place at the end of a road, very private and replete with three grey tabby cats like the one Sandy used to have. His lovely wife, Denise, came home for lunch and they took us out to Tumbleweeds where Ms. Ruby served us. They introduced her as the best server in the world and I have no reason to doubt them. Denise had to rush back to work but we lingered a bit with Tom. Thanks to both of you for the food. 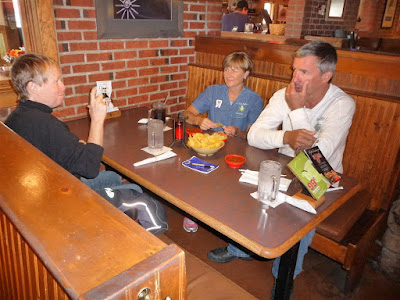 Sandy, Denise and Tom at Tumbleweeds
Tom escorted us back to the Blue Grass Parkway west and said goodbye. We'll be back down here for the Wolfman's Wandering Rally next year. Interestingly, the BGP is marked in this stretch with "Future I-69 Corridor" signs. I guess eventually I-69, a road we often take in Indiana and Michigan, will be continuing south.

In Paducah, I looked for the Pear Tree Inn (owned by Drury) that we stayed at two years ago. That building was something else now and the Pear Tree was next door. It was a change for the better. There is a also a real Drury and a Drury Suites all at the same exit, so they have this place pretty well sewn up. We went across the street to Arby's for sandwiches and then I devoted my evening to catching up the blogs. I had an extra hour since we are now in the Central Time Zone.

It looks like we are on track to meet Sherm in Branson tomorrow. he has a room for us to share at the Ramada. Then we will head down to Eureka Springs Thursday morning.

One bad note. Last night, we heard that Chunk Keisling from Wisconsin, a great guy, had his car stolen in St. Louis. The car was recovered (with some damage) but his expensive camera and laptop computer were gone. I hate it when bad things happen to good people.
Posted by Jim "Skid" Robinson on 9/16/2008