It was a very pleasant morning although it again had the promise of being a scorcher later on. We got a slow start because we only had a couple of hours drive and the check-in time at the end was 3:00 PM. The continental breakfast was good enough although, strangely, they had a row of toasters and butter but no bread. When I asked about it, they confirmed there wasn't any as if it was totally normal.

After checking out about 10:00 AM, we drove south to West Branch where we stopped at a Walmart to grab a few things. Among them, a large case of bottled water, some Slim Jim's and a couple of large boxes of 5 Hour Energy drinks. I also found some G-301 Zebra gel pens, the same kind that you can't find at home any more. Sandy bought a shirt but forgot to get the single serve flavoured coffee creamers she likes. 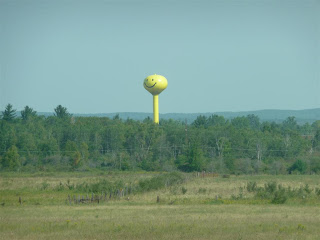 Continuing south, we stopped on the outskirts of Saginaw at a new McDonald's that advertised RV parking. While we were eating in the restaurant, I got a call from Heather telling us they were about an hour away from the hotel. We exited I-75 on Dixie Road (somehow this just doesn't seem like a legitimate Michigan name) and headed into Frankenmuth, Michigan's Little Bavaria. I missed the Fairfield Inn  the first time because the GPS said it was on the left. It wasn't. On the second pass, we found it and a good sized municipal parking lot out behind where we unloaded and unhooked the trailer. I parked the truck and rode the bike around to the main entrance.

Confirming that we had an hour until check-in, we settled in to the air conditioned lobby. Then I went out and met a gentleman named Dave, a retired RCMP officer who asked about the OPPVA sticker on the bike windshield. We spent some time talking until Tom and Heather pulled in on their Suzuki Boulevards. The three of us went in to register. As we waited in line (it was just 3:00 PM and everyone came out of the woodwork), I mentioned the ex-Mountie. Tom went back outside because a friend of theirs father was a retired Mountie. Wonder of small worlds, it was him. 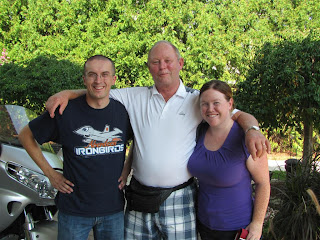 We hauled our gear up to the room. It had two queen beds but space was a little tight. On the plus side, they covered it with points from Tom's travels to the US on business plus a little top up. Then we headed off to the pool where Dave and his wife Louanne were already relaxing in the whirlpool spa. The pool was a very comfortable temperature and we alternated between there and the hot tub.

After we finished in the pool, we got dressed and headed across the street to the Frankenmuth Brewery where Sandy and I split a club sandwich. Then we took a walk through town to check things out before returning to the hotel and going to bed early. 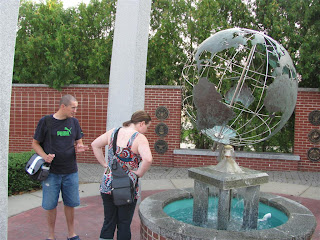 Memorial at the Fairfield Inn 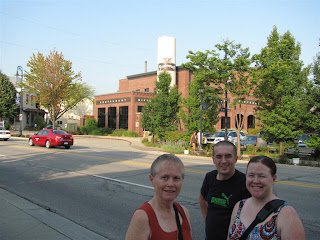 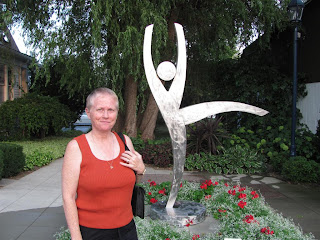 Sandy and a local sculpture 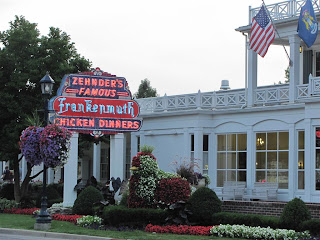 They say dinner here is a must 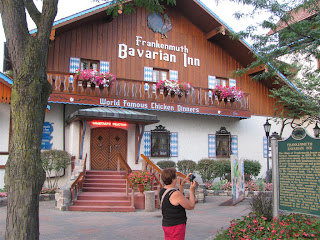 Competing dinner by a Zehnder cousin 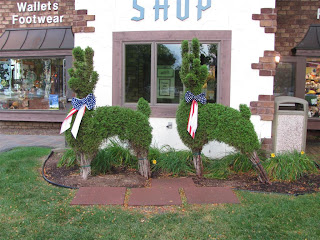 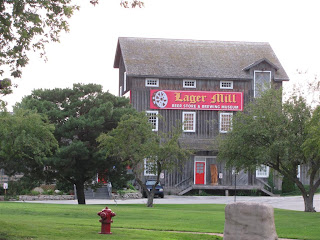 Bavaria and beer go together 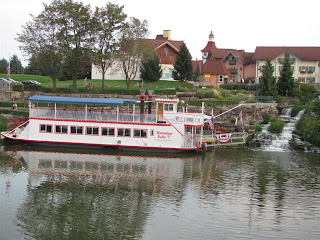 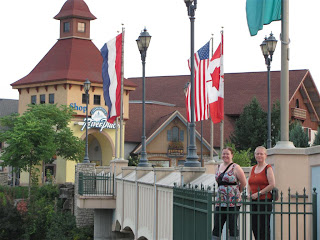 Bridge over the Cass River 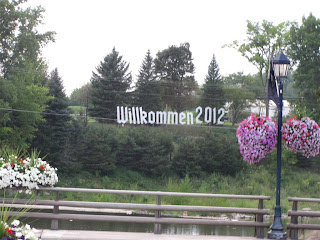 A line from Cabaret popped into my head 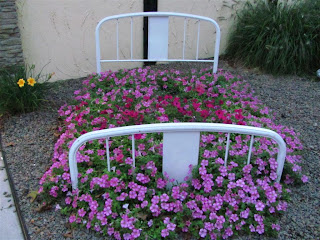