Interlochen Michigan - Around The Campground

It was a cool, grey, overcast morning but there was no dew. I struggled as the Rocket Stick kept flipping between 2G and 3G signals, making my Internet connection a problem. I noted the Tracfone had not added the additional time yet and figure that if it doesn't update by this afternoon, I will have to call them. My shin was still sore so I put on my sneakers for the day. 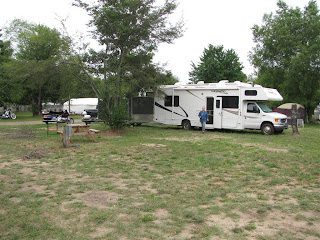 We decided to try a new place in town for breakfast. Ray and The Grouch tried it for supper last night and said they would be returning. We would have had supper there yesterday but they closed before we got there. This morning, we headed over along with Scotty and Marlene. I don't recall what the others had but my clubhouse scramble was tasty. 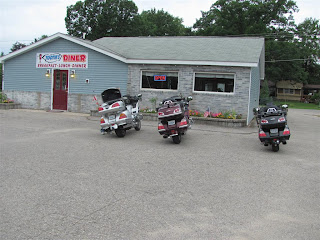 Back at the campground, Leo and I wandered over to the Cycle-Moore office to settle up our accounts. They have been adding a lot of old bikes and, although some of them are rough, it was an interesting collection. 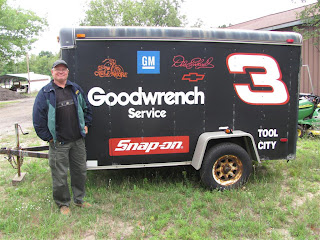 It wasn't warming up too much and no one seemed inclined to go for a ride. We hung out for a while with the assembled multitudes before Leo and I decided to go looking for some glue for his bike mirror. Although I caught it on the trailer door frame, it was already cracked from the delivery company last year and he has new mirror housings at home. 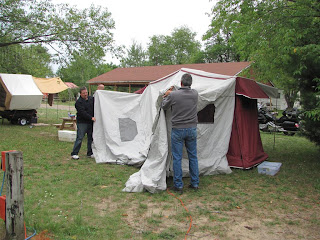 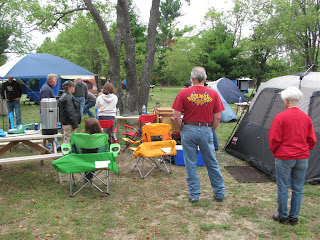 Roger the Grouch and Marlene look on 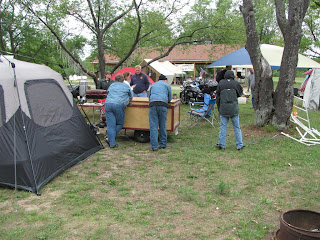 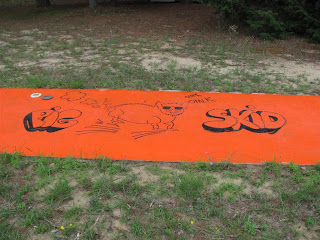 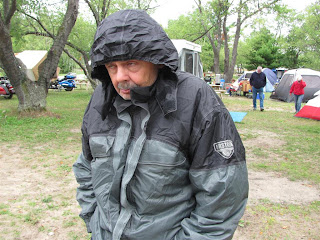 Leo and I set out but I missed Thirlby's, an automotive supply place in Interlochen, and went all the way to the big intersection. On the way back, I detoured down Silver Lake and Secor Roads so we could ride the curves of Long Lake Road. Then, after not buying an glue at Thirlby's, we rode back down and followed more Long Lake Road curves to Lake Ann before returning to US 31 and Cycle-Moore. And that was our ride for the day. On the downside, I noticed the left fork seal was leaking again. It is likely I did  this by overtightening the straps in the trailer due to the different angles but it is getting really frustrating. On the plus side, I noticed that my Tracfone added the new minutes.

Back in the campground, a few of us followed Scotty to Bud's in Interlochen for lunch. What a delightful place. I had a honey ham and Swiss melt on a panini while others had different things. Sandy took half her turkey sandwich home but, unfortunately, left part of one of her teeth there. I see another dentist visit in the future. 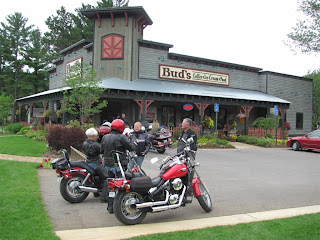 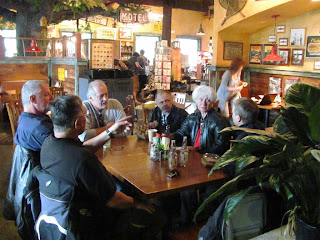 Back from town, I took a nap in the RV from 2:00 PM until 4:00. Sandy and Leo did likewise. Later, we went with Scotty and Marlene to the Hofbrau. I had an interesting New England clam chowder, very thick with some green and red bits that enhanced the flavour. I even found a whole clam in it. I followed with a Cobb salad that came in an enormous bowl. This left no room for dessert despite the fact that the six layer cappuccino cake was still on the menu. Flip and I struggled with this years ago. Tonight, the entire table split one serving of strawberry shortcake. 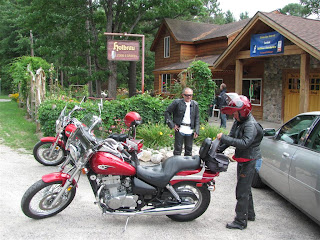 Scotty and Marlene at the Hofbrau, Interlochen Michigan 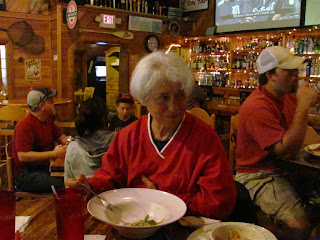 Marlene and the huge salad bowl 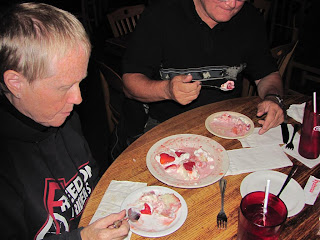 Finishing off the strawberry shortcake

Back at camp, we covered the bike and adjourned to the twin campfires. Eventually someone suggested Euchre and I joined Rainman Ray to take on Flatop and Flip. Right off the bat I noticed a different rule. Back in Canadia, if you order your partner up, you MUST go alone. Apparently no such restriction exists south of the border, making the game easier. Easy or not, Ray and I didn't do too well and were forced off the table after two games. We watched for a while before eventually returning to the fray and holding on until we all quit about 2:00 AM.