First thing this morning, I noted that the Tracfone I bought in Bristol, Tennessee to use in the USA only had four days remaining to add time or else I would lose my outstanding 154 minutes. I went to their website and used my Visa card to add 60 minutes. I also paid extra to increase the update period from 90 more days to a year. When I finished, it said to leave the phone on and it would be updated within 24 hours. Best to do this when I am in the USA in the future because there is no Tracfone signal here in Canada and I might not be able to update the account.

Phone updated, I took the truck over to pick Leo up. We had planned to leave about 7:00 AM but, after stopping to add air to the trailer tires and get coffee at the Levesque Tom Horton's (which was proudly displaying its "Free WiFi" sign, we were rolling westbound on the bypass at 8:29.

Atypically, the wind was out of the east giving us a tail wind. This direction means Sudbury will probably get rain soon but that was not a concern for those of us who were leaving. The trip to the Soo was uneventful except for the bridge at Iron Bridge being down to one lane controlled by traffic lights. The green lights were extremely short which did not make for the most efficient traffic control. Signs said we would be faced with this for at least another year.

We arrived at the McDonald's in the Soo at 12:20 PM and stopped for lunch. 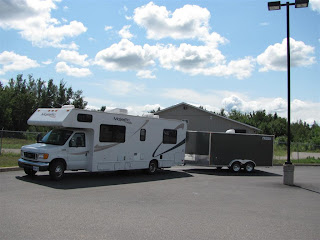 The rig at McDonald's in the Soo

After lunch, we followed the truck route around town via the Second Line, which was heavily under construction, and proceeded to the International Bridge. As soon as we got on the bridge I knew we had a problem. The traffic was backed up almost to the Duty Free even though there was no line up for entry into Canada. This has become a typical situation on this two-lane bridge and I avoid crossing US bound at this portal whenever possible. 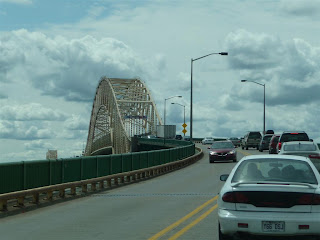 Ahead of us in the line was a  white Pontiac with Quebec plates. It was driven by a young man and there was a large dog in the passenger seat. All across the bridge, he would shut the car off and let a long gap open up before moving forward. Several times, he got out of the car and went to the edge of the bridge to look around or take pictures. For some reason, this really annoyed us and we were satisfied when, in the Customs booth, he was escorted into secondary inspection by two agents. As for us, when we finally got to the booth, the questions were quite thorough, having to do with food, firewood, how often we crossed and a number of other topics. In the end, we were allowed in without even having a visual inspection of the interior of the RV or trailer. Once again, I really like my new relationship with Homeland Security despite the 1 1/2 hour delay on the bridge. 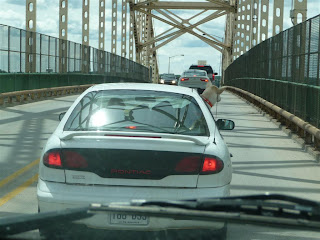 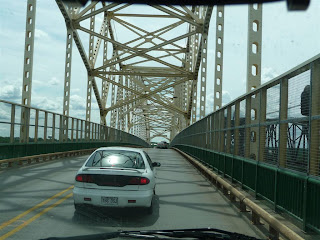 And a longer gap 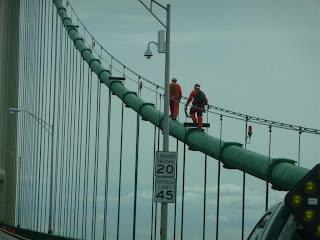 I couldn't do this job 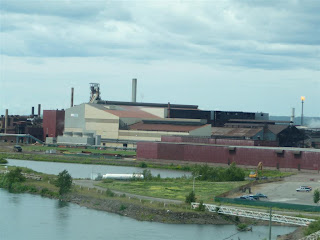 We headed south on I-75, forgetting to pull in and get fuel right away. I stopped at a BP station in Kinross. It had easy access but the regular price was $4.09 per gallon, one cent more than the highest price I had paid in California last year. The prices surged about the time I decided we would take the RV back on the road. In the interests of the North American economy, I really need to get rid of the motorhome so that gas prices will come down and stay down.

The crossing at the Mackinac Bridge was uneventful other than the $5.00 per axle charge. Yikes! The Avalanche and two axle trailer would have been $8.00 while this outfit cost me $20.00. On the plus side, the trailer tracked perfectly behind the RV despite the usual crosswinds.

We continued south past the usual turnoffs at Mackinaw City and Gaylord to catch M72 west from Grayling. I expected this road to be easier to negotiate and it was just that, until I reached US 131 south of Kalkaska. As usual, from those who follow our travels, I followed the GPS without checking the map. Instead of following nice, straight M72, which was north of us, I was guided south and caught Boardman and then Supply Roads. These were narrow, rough and winding roads that, while shorter, were less than ideal. I managed to keep up a good pace as we slalomed through the countryside. 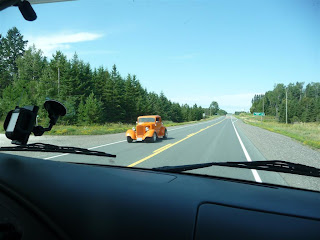 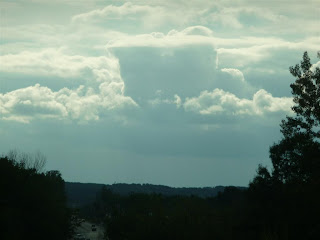 Clouds over towards Interlochen

As we reached the outskirts of Traverse City, I saw a BP gas station with regular at $3.84. As I expected, the $4.09 price in the UP hinterlands was exorbitant. One thing that did intrigue me was a traffic light that controlled left turns in an intersection. Usually these have green arrows indicating turning traffic has right of way and red arrows saying left turn is not permitted. This one also had a yellow arrow indicating left turns were permitted but turning vehicles did not have right of way. Anyone who has sat at a red arrow with nothing coming the other way will see the wisdom of  this arrangement. I hope it catches on.

We arrived at the campground at about 7:00 PM and found most of the people were already there. After checking things out, we found one post that would serve two sites with 30 amp power. There was a Class A pusher on one side so I located us on the other while the lady from the A came out to make sure I didn't damage her slide out. Unloading the bikes wasn't problem free as I caught one of Leo's mirrors on the trailer door frame on the way out and banged my shin on the engine guard when the reverse did not engage completely while trying to back mine out of the Condor chock.

The three of us rode up to Giovanni's Restaurant where Sandy had lasagna and Leo had a bony chicken. I had a turkey bacon club sandwich that was quite tasty. My shin started to swell where I had banged it, right on the same spot I had cut last year. I opened my boot and put some ice on it while we ate. Back at the campground, I switched to running shoes.

We spent the evening sitting around the campfire catching up with everyone. Bruce, Mike and I were the last three up and finally turned in about 12:40 AM.