Weekend with the grandkids

After getting back from Michigan, it suddenly occurred to us that we had not seen Kim, Mike or the grandchildren since they came up at Easter. And, as I played golf with Leo this week and noted leaves were already falling on the course, summer was sliding by. So a visit was was overdue and, this past weekend, we put that right.

We left a little late on Friday because I had to take care of some bookkeeping for the Freedom Riders. But we were on the road by 1:00 PM in the truck. The new four lane section down to the Killarney Highway was opened a couple of weeks ago (complete with wildlife fencing), one more installment in the never ending Highway 69 saga. The funny thing about this is that I went to check the project status on the Ministry of Transportation website and found that it hasn't been updated in over two years. Way to go, MTO, you should be ashamed. But Wikipedia has the information right up to last week.

We stopped at McDonald's in Parry Sound but, after using the facilities, opted to order food from the drive-through because the restaurant was packed with teenagers wearing their flat brimmed ball caps sideways. I guess getting older means inconsequential styles the kids favour really get on my nerves.  I am turning into Jeff Dunham's buddy, Walter. And it doesn't bother me, which DOES bother me:-))

I learned something about the truck on the way to Parry Sound. When you go to pass a car on the two lane road, pull out first and hit the throttle second. Doing it the other way around risks running over the other vehicle.

Traffic was rugged out of Toronto, fully stopped several places along 400 North. We got off at Highway 9, which was also busier than usual. There also seemed to be an inordinate number of left lane hogs as well. Maybe it was the time of day. Westbound Highway 9 to Southbound Airport Road could use an advance turning arrow but we finally made it on the third light. I took a different way around Guelph ending up on Highway 6 south to the 401 and we arrived at Kim and Mike's about 6:15.

The grandkids are growing. Although Jolene is just over 3 1/2, she proudly told me she wears five year old sized clothes. And Robyn has a growing vocabulary including Mommy, Daddy, no, self and now. She also says "tek oo" any time you give her something. At supper, we found that Jolene had contracted the bug that was going around the baby sitter's. She started throwing up and continued all night. Perhaps out of sympathy, Robyn started heaving at bed time as well. Mike did not have a good night.

Saturday, we spent much of the day playing with the kids. Kim and Jolene baked cookies and Mike cooked a pork roast that, due to a timing problem, ended up as very fine pulled pork. Jolene watched some of the Nationwide race from Montreal with me and we both cheered for the girl driving the green 7. We didn't stay up too late. 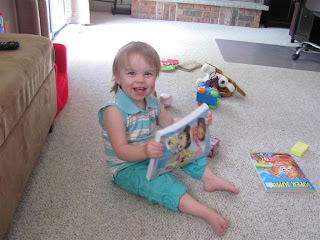 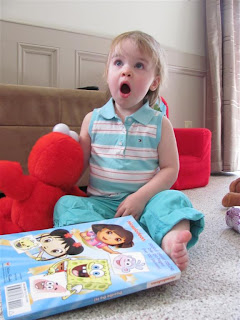 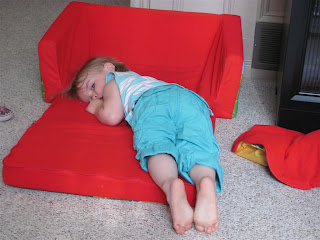 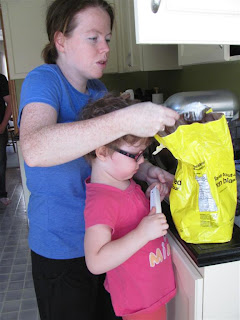 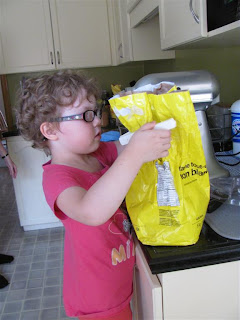 More flour?  Why not? 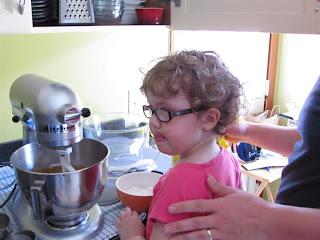 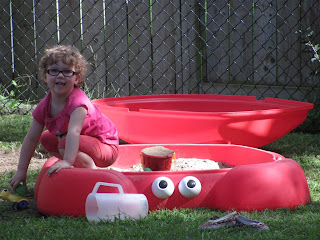 I was late rising on Sunday. Today was the seventh anniversary of losing Wolfman so VROC was down for the day as we remembered Rick and all he did for us. A day without the newsgroup underscores just how much it and the people who populate it mean to me. 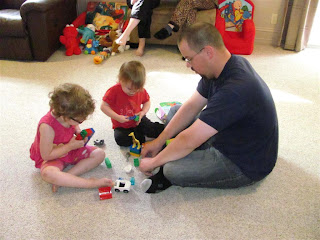 Mike gets a lesson on animals 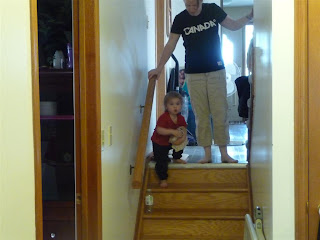 Robyn is fearless on stairs

Kim and Sandy took Jolene shopping for school clothes. As I mentioned before, the child won't be four years old until December but she will be starting school in a couple of weeks. This is due to the beginning of full day junior kindergarten, a benefit provided by Premier Dad with OUR tax money. It was very generous of him to commit our money to this, given the provincial deficit and debt, but I long ago ceased to expect any rational initiatives from this man or his government. In any case, Jolene got some nice new clothes and shoes. Then she had a nap while Kim and Sandy went to a second hand boutique and got even more. Mike and I played with Robyn and stayed out of the way.

Because we hadn't seen Heather and Tom since January, except for a couple of hours at Boomer's, and also because Tom was called back to the US on business, we decided to spend the night in Woodstock with Heather. We got there about 6:00 PM and took her to Montana's for supper. Both she and her sister joined Weight Watchers, so Heather had salmon while Sandy had a BBQ combo that featured back ribs and shrimp. I had one large beef rib and some coleslaw. Back at the house, we watched a movie before turning in.

Monday morning, we were up and out before 8:00 M. We fueled and picked up some breakfast at McDonald's before heading east on the 401. We got off at Highway 6 and followed back roads to Highway 24 in Eramosa, then followed 24 to Airport Road and Mono Mills (where gas was $1.259, the lowest we saw this trip).

Then we went east on Highway 9 in a line of cars doing 95 in an 80 KPH zone. This was important because, just east of Tottenham Road, I decided to pass a few cars that weren't doing a steady pace. In a downhill passing pane, a York regional Police constable running a LIDAR (laser) unit on a tripod clocked me at 104 in said 80 KPH zone and I was directed to pull off onto a concession road. They had an assembly line going with three cruisers and constables taking turns writing tickets. Our cop was good and knocked the speed down to 15 over, so that the fine was minor and the demerit points were non-existent. As happened in 2005, the OPPVA licence frame was in the back seat (although Sandy had, once again, suggested I install it before we left home).

I was surprised that the computer generated Provincial Offense Notice had the constable's name computer printed in block text on the line where we used to sign indicating the notice has been served. Justices of the Peace in our area were very particular about signatures here but I have to assume that the JP in Newmarket must be OK with this. Just the same, I will check some jurisprudence before paying the ticket. 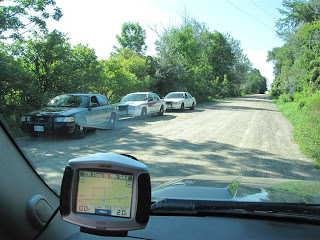 Other than some substantial road construction on Highway 400 north of Barrie, the rest of the trip home was uneventful. We did stop at the Country Style in Waubaushene for coffee and an apple fritter to go. Near Parry Sound, some of the trees are already changing colours. No! It is way too soon for that! 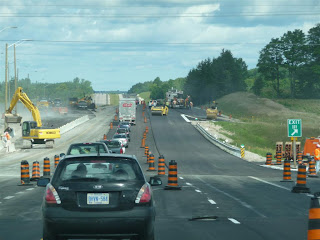 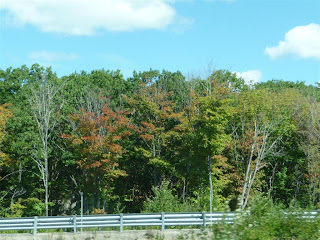 Leaves starting to change colours along Highway 69
I noted that the section of Highway 69 north of the French River that Wikipedia described as the "next segment to be four laned" won't be finished until 2016 according to the sign on the roadside. This doesn't bode well for having the whole job completed by 2017 as promised by MPP Rick Bartolucci. Failure to be done on time wouldn't surprise me one little bit.

We arrived home mid-afternoon and spent a few hours pulling bags of weeds in the front yard. Premier Dad and his herbicide ban have made the dandelion Ontario's new provincial flower.