As mentioned in the Interlochen posts, the left fork was again showing oil telling me that the newly replaced fork seal wasn't doing its job. I suspect that my attempt to tie the bike down firmly in the new trailer with a narrower stance using the 2" ratchet straps was too much for it. So I called Kanata Honda when we got back and set up to deliver the bike after lunch today.

I decided that since we would be away overnight, we should make a trip of it and go down to Gananoque and tour the Thousand Islands. Then we could visit the  Canadian War Museum in Ottawa tomorrow morning before picking the bike up around noon.

Yesterday, we picked up the trailer at the Mine Mill Campground and got a pair of Cinchtite 2 tie down straps. These are 1" straps that are five feet long. They are heavy duty and have the strap looped so it can't be pulled out of the ratchet mechanism. At home, we moved one of the Condor chocks to the centre channel and guessed at a good fore/aft location. Then I rode the bike in and got it fixed in the chock. The new straps were much easier to use than any others but I just put enough tension on them to keep the bike upright. I tied the rear down with my usual straps. 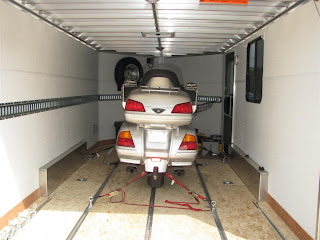 Lots of room in the new trailer


We were rolling at 7:00 AM this morning, stopping at Tim Horton's on the way out of town for a bacon breakfast wrap and coffee to go. We stopped again at the McDonald's in Sturgeon (easy parking) for a bathroom and muffin break. I spoke to an older rider from Montana on a GS BMW. He said he had done Alaska the last three years and was aiming for Nova Scotia this time for a change of pace.

North Bay was a pain as we caught every red light on the so-called bypass. East of North Bay on 17, I noted that the hills here are short but they are also steeper than almost anything I found in the Rockies. It is frustrating towing a load and climbing all these hills only to find that you end up at the same elevation you started at.

All was going well until we left Bissett Creek and encountered a flag person. We sat for a long while with nothing coming the other way until a pilot truck came into view leading a long line of vehicles. This was the 13 km stretch between there and Stonecliff that, according to the sign we saw in June, was to be finished rebuilding this year. In June I had my doubts because nothing had been started, but Miller Paving has the whole 13 kilometers torn up and is making great progress. We followed the pilot truck through gravel,  dirt and some new blacktop until we made it out the other side. 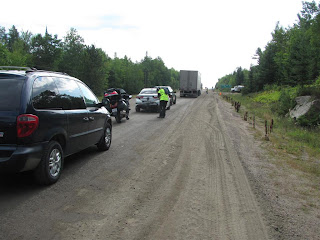 The start of heavy construction east of Bissett Creek 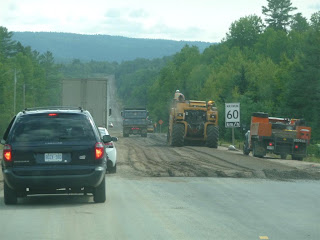 They are going full bore on this project 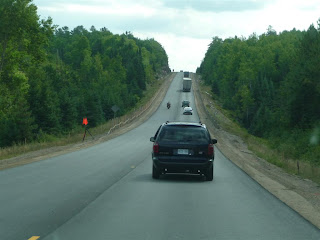 After we cleared the gravel,  the ST rider decided to get moving

In Deep River, we caught up to a Canadian military truck with a large yellow Student Driver sign on the back. Outside town, it caught a line of other army trucks on the shoulder that were waiting to regroup. They ALL pulled out in front of us and so we followed the procession to Chalk River where I managed to get by some of them in the short four lane stretch. I expected them to pull into CFB Petawawa but they kept going, even speeding up in the passing lanes limiting our ability to get by. 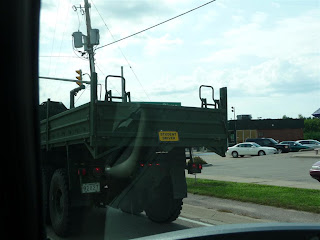 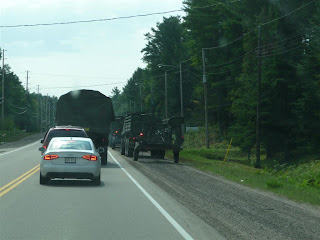 A whole group of them 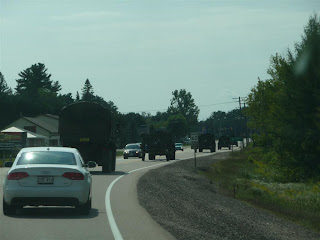 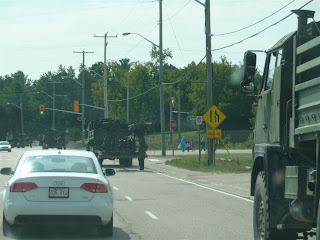 Passing some in Chalk River 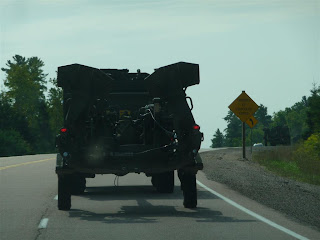 I have no idea what this trailer is

Arnprior is still under construction. Well, Highway 17 through Arnprior is anyway. This seems to have been going on forever. Maybe they need those fast Miller guys working down here. 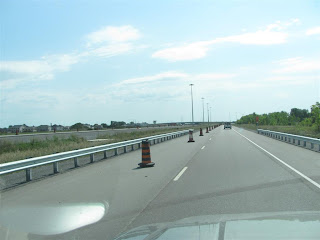 
We got into Kanata Honda at 12:45, unloaded the bike and delivered it to Curtis in the service department. It was supposed to be ready for noon tomorrow. Then we unhooked the trailer, secured it in the dealer's lot and got ready to head for Gananoque for the next part of our adventure.