It was clear and definitely cooler this morning. For the first time since we got here, a layer of dew covered everything. We did a circuit of the campground to say goodbye to everyone and were on the road by 8:00 AM.

Unlike the back roads coming in, we stuck to US 31, Airport Road, Three Mile Road and 31 again around Traverse City before turning east on M72. It was a pleasant drive without too much traffic. We turned northeast on US 131 in Kalkaska and stopped at the McDonald's just north of Mancelona, where they have a large truck parking lot. I wish we could get the steak, egg and cheese bagel on the breakfast menu here in Canada.

I had trouble remembering the name of the place where we turn off 131 to head for Gaylord. Alma went through my mind but I know that is further south. Alba. Like Jessica. That should stick in my head now. We arrived in Gaylord and turned north on I-75, following it until we crossed the Big Mac and paid another $20.00 toll. I stopped to call a lady named Judy who lived north of the Soo and had expressed an interest in the motorhome. Unfortunately, the interest seemed to have waned over the weekend. 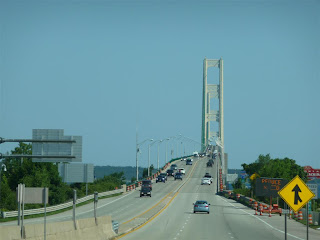 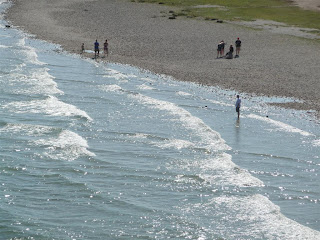 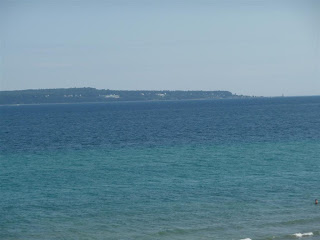 The Grand Hotel on Mackinac Island

We stopped at the Citgo on the US side in the Soo to fill up with relatively cheaper US gas. It is hard to think of $4.00+ gas as cheaper but ours currently works out to over $5.25 when converted. I put $180.00 into the tank and got a free coffee.

We crossed the bridge noting the long line of vehicles again trying to get into the US. On the other hand, no one wanted to go to Canada. There was no line up. There was no one in a booth. We were it. A couple of easy questions and we were home.

I used the truck route around town to avoid the construction on Queen Street. We headed right out of town, noting that many of the osprey nests on the power line parallel to the highway north of Echo Bay seemed to be missing. Hydro personnel cleaning them up? Don't know.

We stopped at a picnic area just before Bruce Mines and finished the pizza and turkey sandwich for lunch. We were delayed at iron Bridge where I determined each green light on the one lane bridge lasts twenty seconds while having the light red in both directions lasts one minute. This means 3/4 of the time both lights are red. I don't know what individual thought this was a good idea but IT IS NOT. We stopped again briefly before Spanish so I could walk around for a few moments and arrived home at 5:10 PM.
The motorhome and trailer got left on the street until tomorrow.

Inside, I got my socks off and looked at my sore shin. Deja vu all over again. My ankle and foot were heavily bruised so i have to figure that one of the blood vessels I cut last year when I fell off the ladder must have torn again. Ice and elevation. I thought I was all over this one. Oh well, I am still an accident looking for a place to happen. 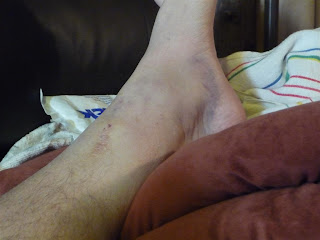 Not so good shin and ankle