Sandy and I weren't up until 8:00 AM. There was nothing major going on at the Ride In this morning, so we went down to the lobby for a continental breakfast. Then we returned to the room where I sat my butt down at the computer and did not get up until I had finished posting all our receipts and writing four days of outstanding blog posts. I got done that about 2:00 PM.

All caught up for the moment, we took the car over to the fairgrounds and picked up our registration package. We then hung around in the registration tent with a few other folks until it was time to go to supper. 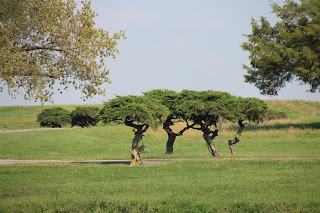 These are pretty trees 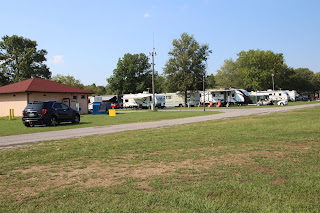 The campground is filling up 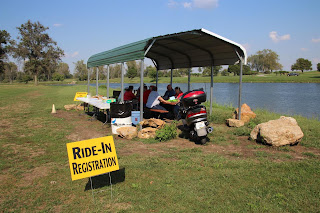 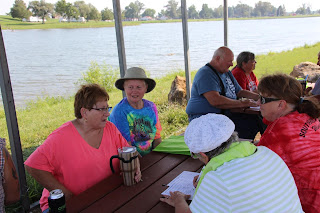 Trying to get some names on the Make A Friend sheet 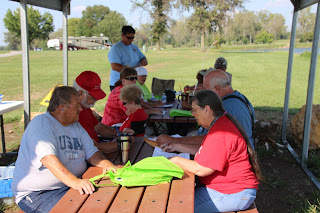 Willie eventually got back from taking his mother to her doctor. He and Carlene decided we should go for supper at Kalin's Cafe downtown about 5:00 because we wanted to get ice cream at Ye Olde Country Store afterwards. they had to be back at the campground by 7:00 for Wingo (like Bingo but with motorcycle related names). 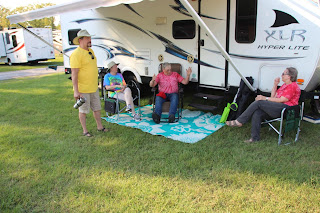 Willie explaining the doctor process to Charlie, Sandy and Carlene

Our Equinox was parked in an open field away from any wires or poles and yet what had to be several birds used our hood for target practice. What a mess. I cleaned some off and will use the cleaning compounds I never use on the bike in the morning.

On the way to the restaurant, I stopped by the hotel room to pick up my phone. I could not find it. Eventually, Willie phoned and Sandy found it blending into the bedspread.

What can I say about Kalin's Cafe? Like Lambert's, they have no concept of portion size. Sandy ordered a mushroom Swiss burger. I asked for a double mushroom Swiss burger with steak fries. I know, I have no willpower. The burger was one of the best I have ever had but I had no idea it would be that big. Two patties made up a monstrous quality of meat and it took everything I had to finish. But finish I did. 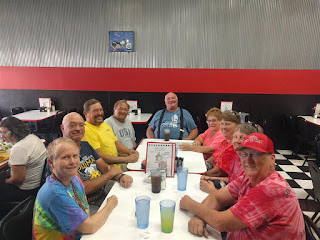 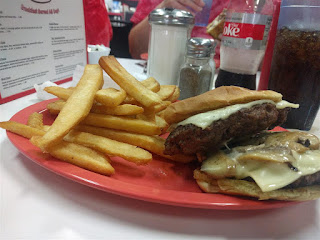 After finishing, paying and inviting the cute server to the fairground for breakfast, we headed down the street to Ye Olde Country Store. We have come here for ice cream every time we have been in DuQuoin. If you haven't been here yet, don't get your hopes up. After trying unsuccessfully to sell the business, Bob will be closing down for good on Sunday.

We all had one (generous) scoop in a dish. I had what sandy had, a caramel something with chunks of chocolate in it. I know I'm really going to pay but it was sooo good. We'll be back tomorrow for another round. Thanks for the treat, Willie. 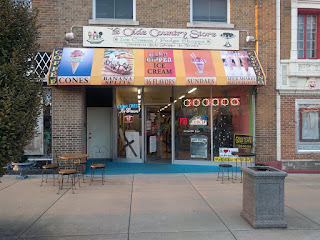 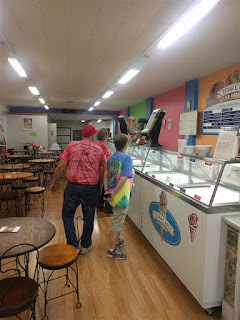 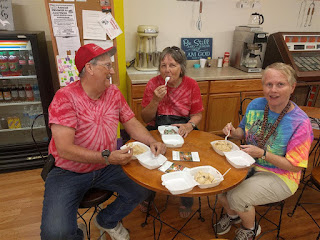 We really enjoyed the ice cream 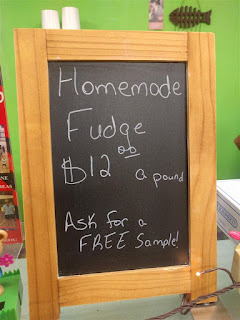 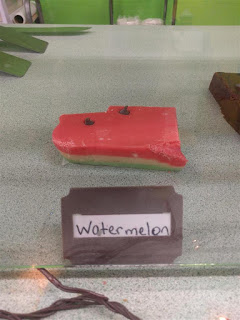 We headed back to the campground where Willie and Carlene got the Wingo game going. The cards have motorcycle related words on them which the caller draws from a box and shouts out. Other than not being numbers, it was exactly like Bingo. 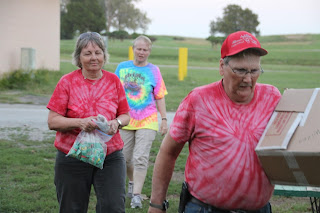 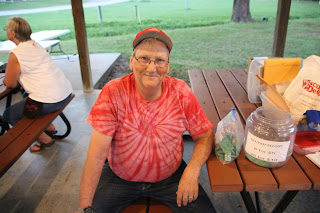 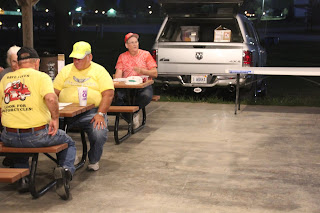 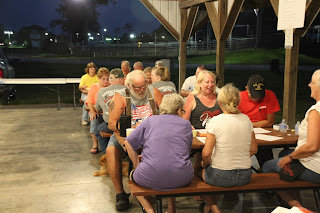 After the sun had set, Sandy and I decided to head back to the room. By 9:15, I had the bills posted, photos sorted and uploaded and story finished. Time for bed because tomorrow, we ride.
Posted by Jim "Skid" Robinson on 9/20/2018