Unlike most years, we weren't heading directly home and so didn't have to be up and running early. Instead, a more leisurely start saw us get out of bed around 7:00 AM. Most of the people were already gone when we stuck our heads out. Zeke and Hang were here since they were just going to Oklahoma today, so we got to say one more set of goodbyes before they pulled out. That just left almost local folks Bill, Laura and Teri as we got ready to go.

Bill, Laura, The Gambler Clan and others put a lot of effort into organizing this week. Hot Sauce, Margot, MoParMan and more worked hard to see we were fed Friday and Saturday. It was a spectacular reunion and Sandy and I would like to thank everyone who contributed to its success. Our room was already reserved for next year. 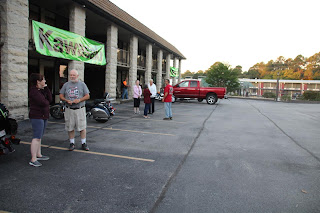 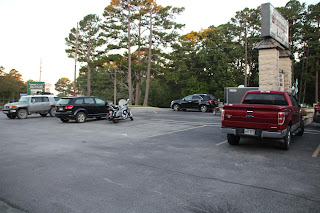 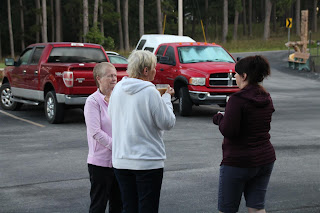 Finally, it was time for us to leave. We had to be in DuQuoin, Illinois on Wednesday, which left us with several days to wander about. Somewhere on the way, I had to pick up a GoldWing final drive in Port Girardeau, Missouri. I figured east would be a good direction, so we departed in that direction on US 62.

I was blinded for the first little way by a combination of sun ahead of us and a fogged windshield. Luckily, the fan and the visors corrected that quickly. 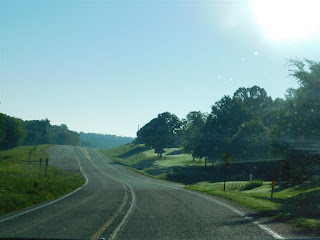 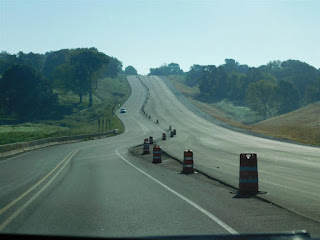 Widening US 62 near Alpena Arkansas 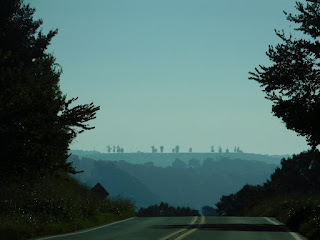 Near Harrison, we stopped at a temporary Arkansas Welcome Center where a lady gave us a guidebook and some maps. We asked about Walnut Ridge, a town the Beatles had stopped at in 1964 which also had a museum at the airport. She said it was a good place to visit and was easily within our range today. 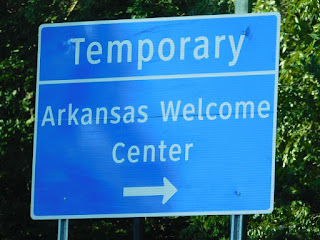 They told the staff the permanent one was coming

We got word that Sherm was back in Kingman, Arizona by 9:00 AM our time. That was an impressive haul, but when he puts his mind to getting somewhere not much stands in his way. It was good sharing a room with him as always.

I was surprised to see a town named Pocahontas, Arkansas. The Indian princess lived on the east coast in the early 1600's and traveled to England so she had no historical connection with this area.

There were several ways to get to the Walnut Ridge Regional Airport. The GPS followed the most direst route and took us right through the middle of the Williams Baptist University campus, complete with severe speed bumps. 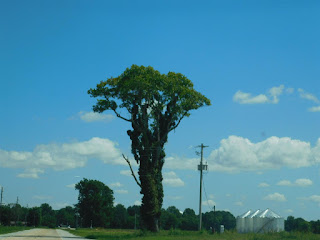 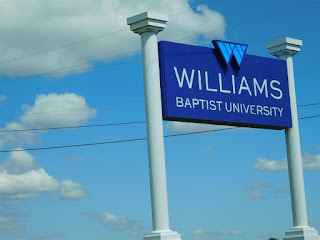 I was waiting for lightning to strike me 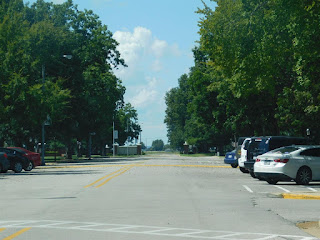 There were two things we wanted to see at the airport. One was the Parachute Inn Restaurant, located inside a retired Boeing 737. It was about lunch time when we arrived and found it was closed down. There were claims that it would reopen some day, but it didn't look too promising. The Wings of Honor Museum was also closed but would be opening at 2:00 PM. It was around 1:00, so we headed into Walnut Ridge for lunch and to check out a few other things. 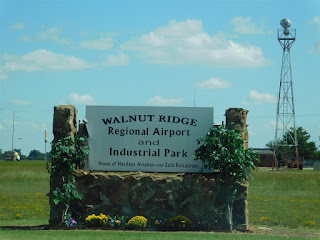 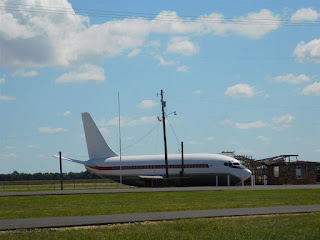 After a quick bite at Mickey D's (the BBQ place was closed on Sundays), we went to check out the Guitar Walk. This was a small park with a walk shaped like a guitar that commemorated Rock 'n Roll Highway 67 and some of the people who played it. Each station would tell you about the featured musician when you pressed a button. 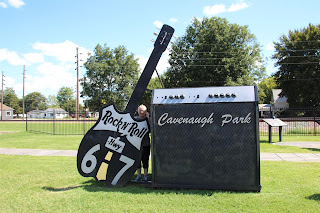 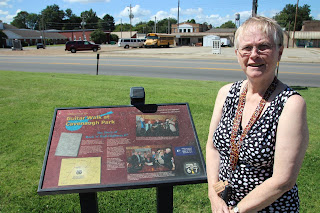 It was hotter than Sandy looked 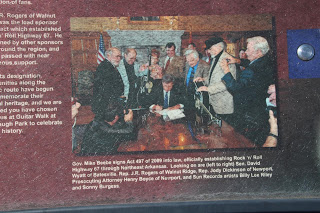 There were several stations 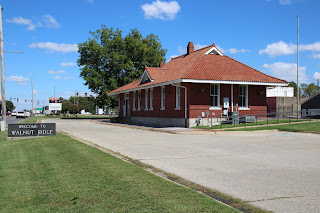 Then there was the train station 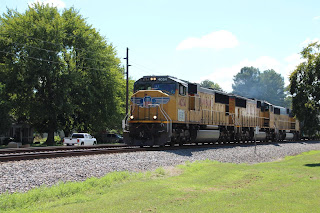 The other claim to fame in Walnut Ridge was a short visit by the Beatles in 1964. We drove down Abbey Road and took a few photos of the landmarks that honored the Fab Four for the brief moment of fame they brought the town. 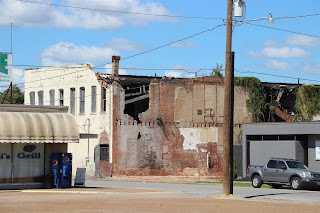 The town is falling down in places 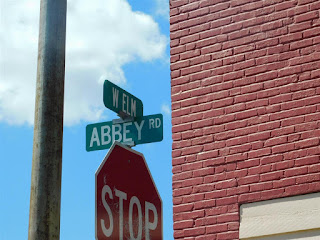 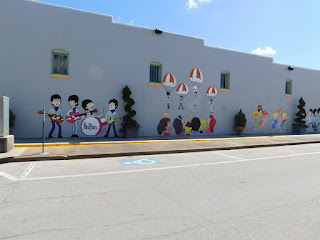 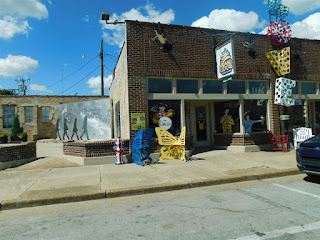 Back at the airport, the museum was open. An older lady and gentleman turned on the lights for us. This was a USAAF training airbase during WW II and the museum focused on that era, but there were also exhibits of more recent eras as well.

One thing we discovered as we left was that the gentleman who turned on the lights was Harold Johnson, a commercial pilot who was hijacked in 1972. He was also the president and prime motivator of the museum. Admission was free, donations were welcomed and we recommend this to anyone in the area. 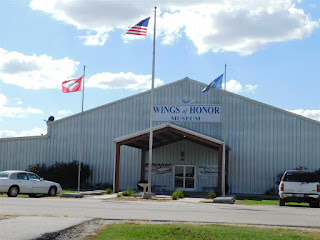 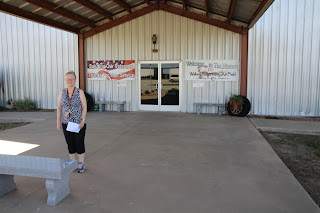 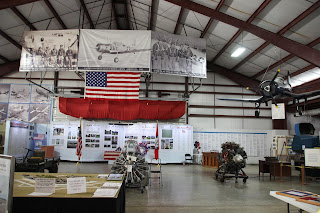 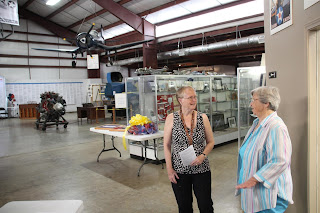 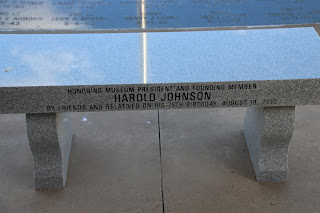 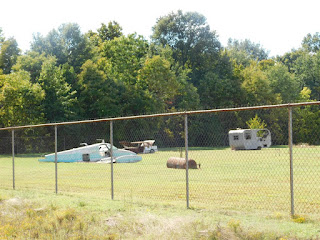 It was still 93 F as we left Walnut Ridge about 3:20 PM. I had booked a room at a Days Inn in Trumann, Arkansas. We would stop there and figure out what we could do tomorrow. The road to Trumann was incredibly straight and flat as we passed rice, soybean and cotton fields. 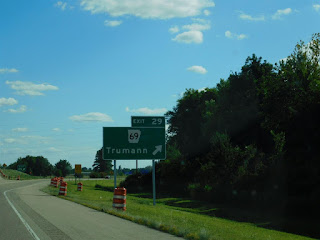 Our destination for the day

The Trumann interchange looked new. New buildings, new pavement. The hotel was nice but our outside door faced the sun and was hot enough to burn your hand. We went downtown and found a Subway with a broken credit card machine and no wheat bread, but picked up supper anyway. Back at the hotel, I unloaded the overnight bags and then parked in the shade of a tour bus.

Despite an attempt to catch up on receipts and blogs, I ended up going to sleep relatively early. 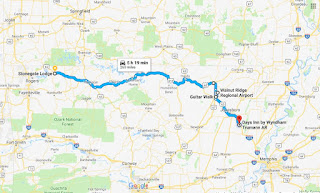