With the trailer connected, bike loaded and suitcases on board yesterday, all that was left after breakfast this morning was to take out our overnight bags. On travel days, these smaller bags carry all the essentials we need to take in to a hotel for an overnight stay. The bigger cases only come out when we get where we are going. By 9:00 AM, we were ready to leave. 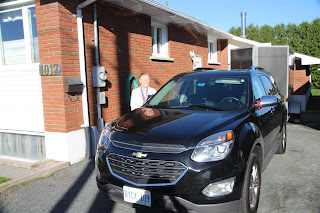 The trip to the Soo was relatively uneventful. Skies were blue and traffic was light. We had to iron out a few bugs with the new (to us) car, even though it was much like the old one. On the plus side, it rode better pulling the trailer than the 2014 did. But the Chev "infotainment" system refused to acknowledge incoming texts through Bluetooth even though the old car did. Sandy forgot to take her sheepskin seat belt pad out of the 2014 while I forgot to install the small convex blind spot mirrors.

As we drove along, we listened to Billy Crystal's audio book, Still Foolen' Em. It was written a couple of years ago when he was 65 and some of his observations on getting older were both hilarious and spot on. 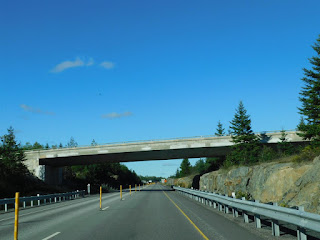 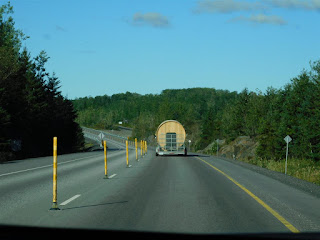 This was either a huge cask or a wooden bear trap 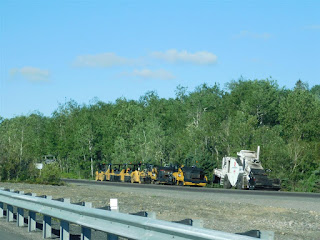 Nobody works on weekends 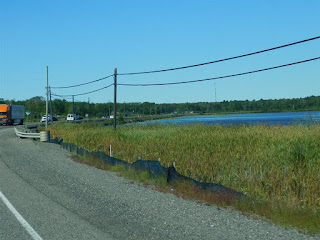 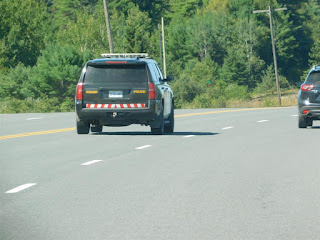 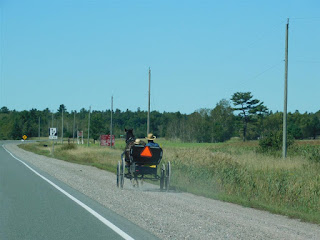 We stopped at McDonald's in the Soo for lunch. Sandy had a hamburger, cranberry orange muffin and strawberry banana smoothie. I had an Angus bacon and cheeseburger with an extra patty and no condiments except onion. I threw away the bun and ate it with the knife and fork they gave me. It was good.

As we ate, I searched Google for Chev Infotainment and texts. Following a few tips, I unpaired the phone and then, when I paired it again, allowed the phone to share texts. Bonzo. We were now text capable. (This means that when a text is received, the car reads it to you in a mellifluous female voice. You are not allowed to reply unless the vehicle is in park but you can press a button and make a hands free voice call.)

Since my brother Rabbi and his buddy Dave were golfing, we headed straight to the International Bridge. I had never seen it so quiet. No Canada bound line. On the US side, we drove right into a vacant booth. Surprisingly, I had shut the Chev entertainment system off but the car still announced "Caution - border ahead" as we approached the international boundary.

The border agent asked where we lived, where we were going and why. Sudbury Ontario, Eureka Springs, Arkansas and to ride the motorcycle in the trailer around the Ozarks. He asked when we last crossed and I said we came back from the US in the third week of June. He asked where we crossed and, for the life of us, neither Sandy nor I could remember right at that moment. Embarrassing. Shades of Billy Crystal's commentary on aging. He laughed and asked if we were retired. When we replied in the affirmative, he said he envied our lifestyle. Just before leaving, I asked where we did cross last time. He said he didn't know. Sometimes they ask questions just to see how you react.

Right after we left the booth, we remembered it was in the Soo. We remembered the very hot stop at the McDonald's in Newberry on the way. 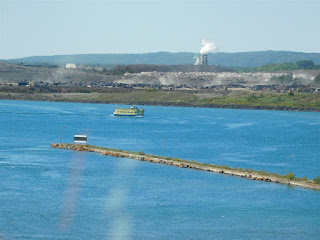 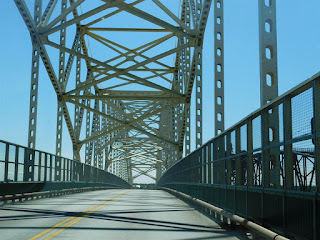 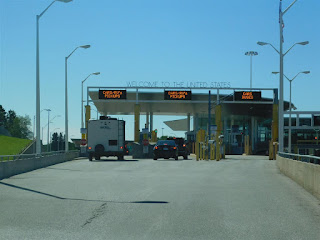 We drove south on I-75. Speed limits were 75 for cars and 65 for trucks with a minimum of 55 MPH. We were doing 60 to save fuel. There was very little traffic and no semis as all on the highway or on the Mackinac Bridge. The first stop was the Walmart in Gaylord, Michigan, where Sandy got another seat belt pad. I got two dozen bottles of Five Hour Energy drinks and four bottles of Seafoam (can't beat $6.97 a bottle at home). We both got snacks. They were out of two packs of small convex mirrors. 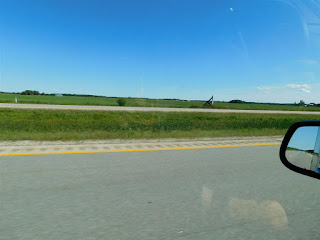 The Upper Peninsula is flat along I-75 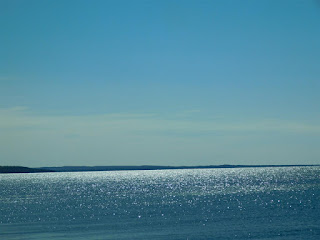 View from the Mackinac Bridge 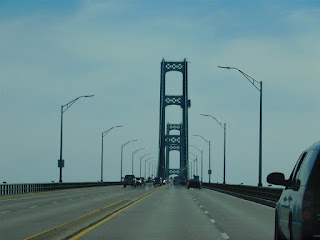 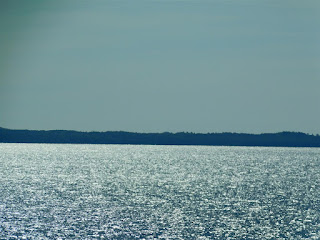 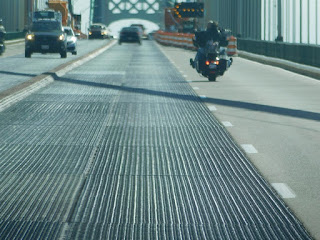 Bikes about to transition to steel grating 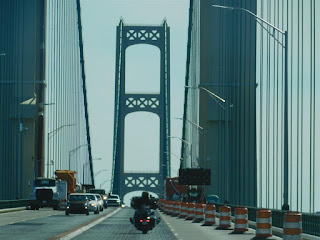 On the last leg from Gaylord to Grayling, we talked to Sherm, who was already settled in Tulsa, Oklahoma for the night. He will arrive in Eureka Springs tomorrow while we should pull in after lunch on Monday.

The Ramada in Grayling was old but presentable. It had better trailer parking that the Days Inn next door. We had a second floor room overlooking the inside courtyard and pools. They served food in the bar until 9:00 PM, so we wandered on down for supper. My Super Salad with grilled chicken was awesome, while Sandy's roast beef sandwich au jus was more than she could finish. 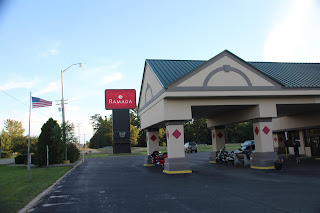 Our home for the night in Grayling Michigan 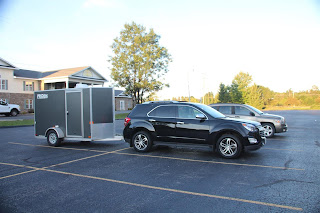 Lots of room to park 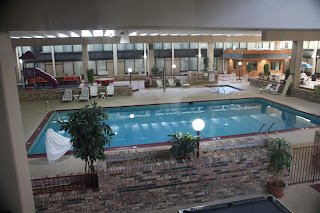 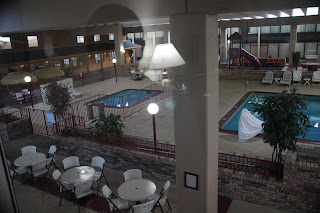 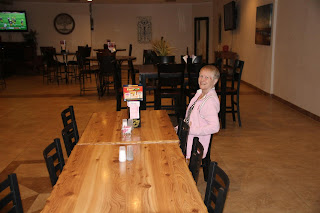 The lounge was pretty quiet 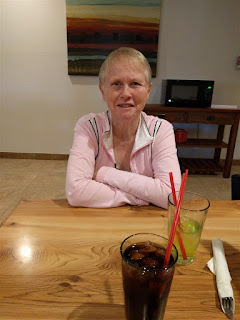 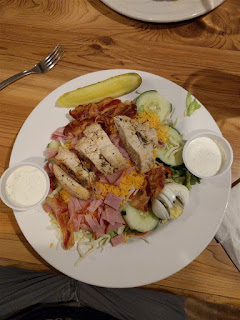 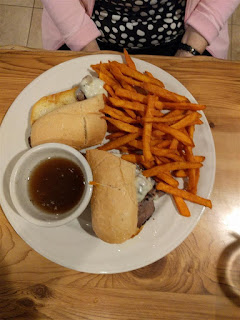 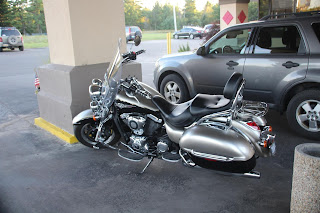 Did not see the Nomad rider 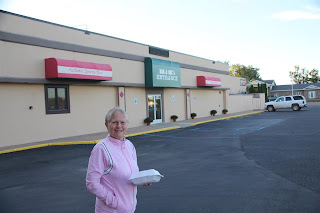 Sandy and her leftovers

Back in the room, Sandy went to bed while I posted bills, sorted and uploaded photos, transcribed notes and wrote this story. Towards the end, I ate the meat out of the half sandwich she brought back in a box with no guilt whatsoever:-))

We will get up early tomorrow and probably try for Collinsville, Illinois. That should leave a short day into ES on Monday. 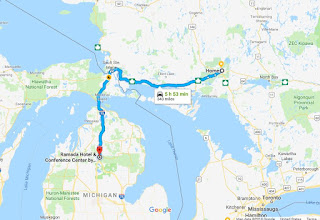