As usual, a group of us went down to the Gazebo for breakfast. Randy, Lanny, Stonewall and CC Rider joined us so we just had a regular table for six. Zeke and Hang came in a little later. Donna and her daughter were back working and remembered us from last year. The scrambled eggs and sausage patties are even better when slathered with sausage gravy. 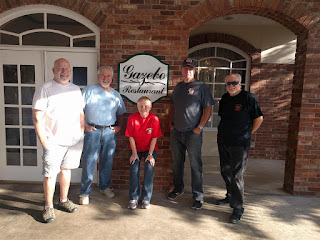 There were several rides heading out this morning. Lanny was taking The Mighty Stonewall through the Pig Trail. Butch and some others were also riding south. Bass Man was leading a ride out west on 62 for ice cream. A few even decided to take the trolley downtown for some shopping. I decided I would just hang around the room and deal with outstanding blog posts and financial doings. 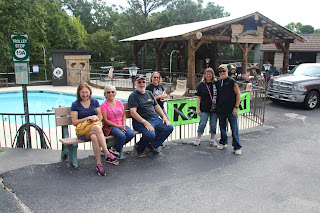 All was going according to plan until Blondy asked me about going to Lambert's Cafe up in Ozark, Missouri. She had wanted to go to the original location in Sikeston, Missouri but that was over 300 miles away, so Ozark was it. What the hell, we had never been there before so Sandy and I decided to go with her.

The drive up US 65 to Ozark was boring on a bike, which Blondy didn't have anyway, so we figured we could take the Equinox. Sherm joined the party and then Red Rover (Bob) joined us, so we had Equinox overflow. Blondy and Bob followed the three of us in her GMC Colorado.

We drove up 21/86 to US 65 without incident. The traffic north to Ozark was moderate but one guy in an Avalanche towing a bass boat got on my nerves. I passed him because he was going slower than we were. Then he cranked it up and got between Blondy and I, crowding my rear bumper. I slowed. Then I pulled right and let him pass. Eventually, he slowed down again. Strangely, he pulled into Lambert's Cafe at the same time we did. 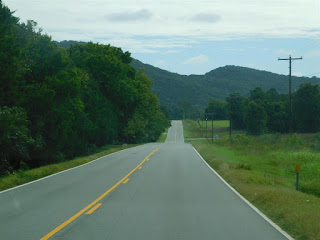 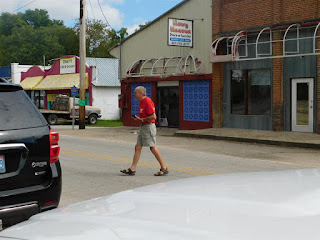 Sherm getting a photo of the Blue Eye Reunion banner 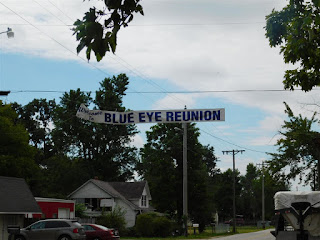 Blue Eye is apparently having a reunion (again) 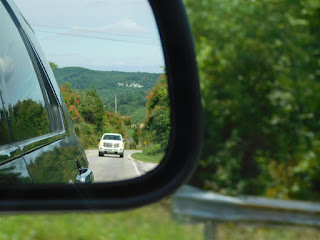 The Colorado kept up easily 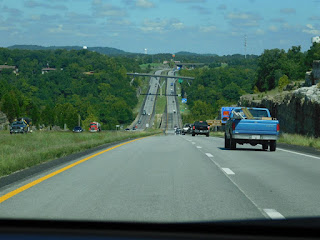 US 65 approaching Branson from the south 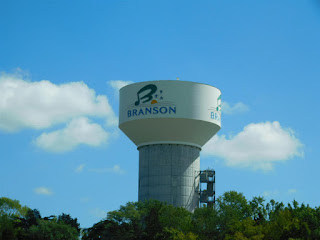 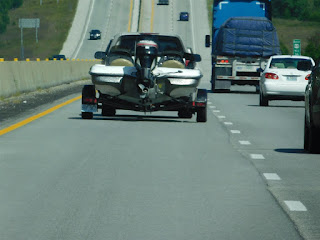 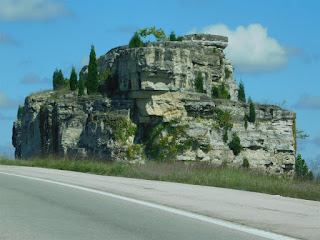 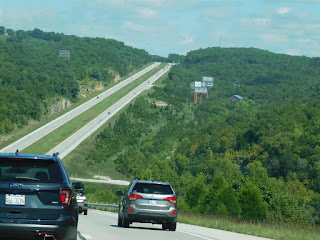 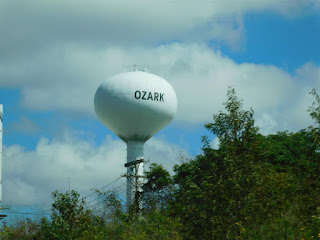 You can tell the towns by the water towers 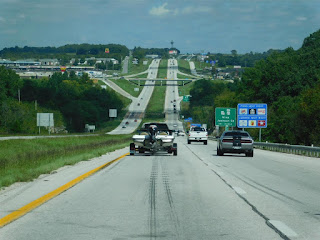 The bass boat is ahead of us again (still?) 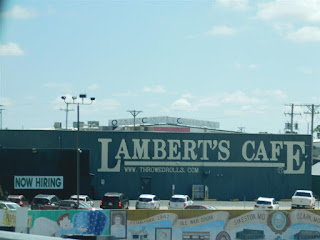 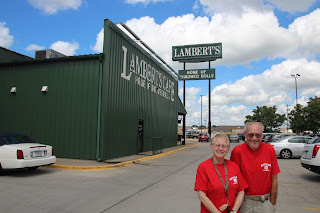 It was red shirt day (thanks Sherm) 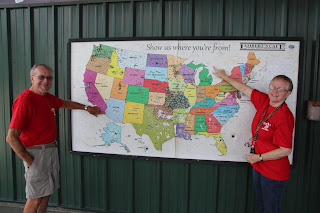 None of us was from around here

There was a very large crowd of Red Hat Ladies waiting to be seated when we arrived. They were handled fairly quickly and then a young lady led us to a booth along a wall. I don't know how many people the place could accommodate but there were a lot of tables and they were all packed.

Our server was a pretty young lady named Mercedes. Blondy thought that was funny because she worked for Mercedes. The drinks came in huge mugs while other folks came around and offered deep fried okra, black eyed peas and fried potatoes (called pass arounds). Periodically, fellow would shout out asking who wanted rolls. If you held your hand up, he threw one at you. When you caught it, you immediately realized it had just come out of the oven. But it was very good. This was the Lambert trademark "throwed rolls" came from.

We gave our food orders to Mercedes. Sandy just had blackberry cobbler and vanilla ice cream. I had a hamburger steak topped with sauteed onion, mushrooms and tomatoes with sides of coleslaw and cold crunchy applesauce. Blondy had something pork while Sherm had hog jowls (much like super bacon) and Bob had roast beef. Lambert's did not seem to understand portion control. When I scraped the toppings off my hamburger steak, I realized there must have been two pounds of meat. About half my order came back home with me. Other than Sandy, the others had similar results. The bill was quite reasonable, especially given the quantities. 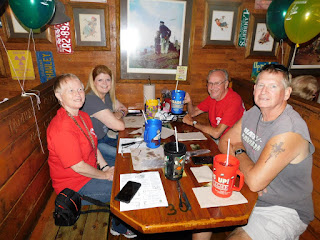 After we finished and took the take-home boxes to the car, we visited the gift shop. Sandy and I bought two 20 ounce mugs that fit in the Butler mug holders on the bike. We also bought two rainbow coloured silicon glasses that are squeezable, microwaveable and dishwasher safe. 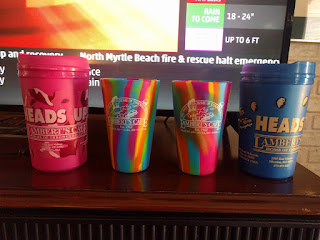 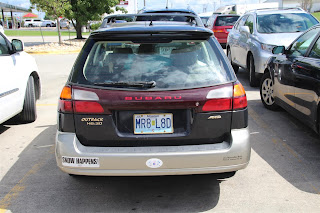 What does a Subaru driver in southern Missouri know about snow?

The drive back was uneventful other than a one ton truck towing a tractor and a dangerous looking spinning hay implement, who hogged the fast lane all the way to Branson, and a flatbed truck driver who tried to pass some cars and ended up crawling up a hill in the left lane. Why not just stay in the left lane? 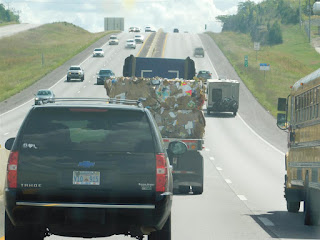 In Berryville, the three of us stopped at the Doggie Thrift Store. Sherm bought a pair of wine glasses for a couple as a gift for getting the lady's name wrong in his blog, while I found a broad brimmed hat just like my doctor ordered me to get. There was a dog in residence, possibly a pit bull/Dalmatian mix, named Spooky. He was about a year old and I would have loved to take him with us, but the lady working there said it belonged to her son. Her name was Judy and she used to sell and sew patches at VROC events here until recently. I said I would pass her information on to Laura. 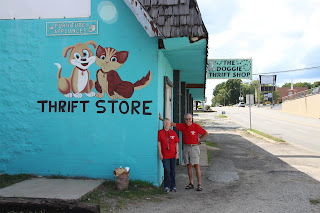 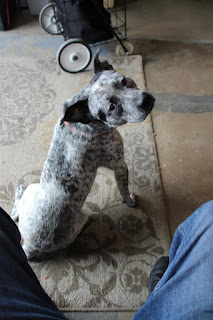 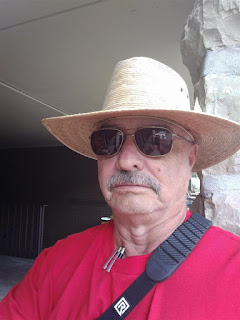 My new hat
Meanwhile, back at the ranch, there were people. 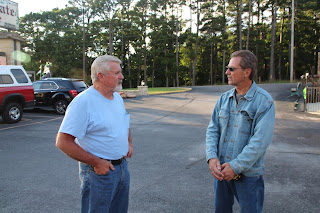 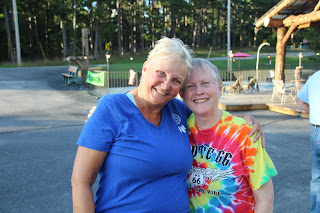 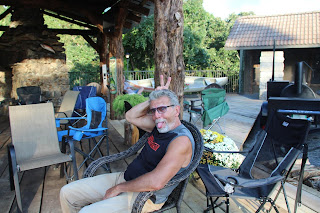 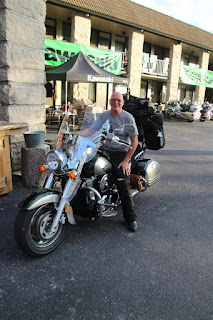 Wench's friend Paul and his immaculate new (to him) 2006 Nomad

Sandy and I had our leftovers for supper. We split her  pulled pork from Sparky's and my hamburger steak, slaw and applesauce from Lambert's. The meat heated nicely in the microwave and was more than enough.

Willie Wonka and Mike said their goodbyes. They would be leaving early tomorrow morning but we would be seeing them in DuQuoin, Illinois next week. As usual, we were back in the room pretty early like the old folks we are. While Sandy and Sherm flaked out, I was blogging until after 10:00 PM. Then I read the Kindle for about a minute before I fell asleep. 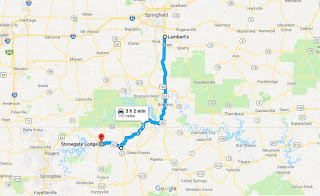