The heat wave was definitely over this morning. It was 60 F and just felt like 60 with rain falling. We received word of a big windstorm at home and tornadoes in Ottawa. To our relief, Di was staying at our house and let us know that we had suffered no damage. 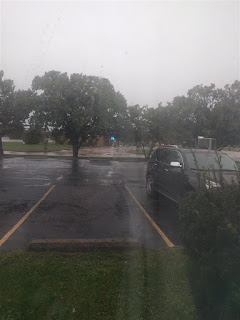 We drove over to the fairgrounds where Carlene was overseeing a fine breakfast. There were eggs, sausage, biscuits and gravy. Then they set up a flea market where I bought a book "NC Scenic Byways" from Steve Schlager for $1.00. I also ordered a Kindle version of Steve's book "The Train That Vanished" from Amazon. 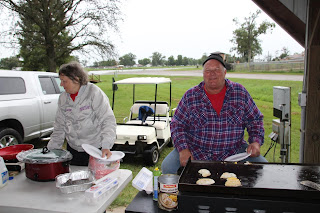 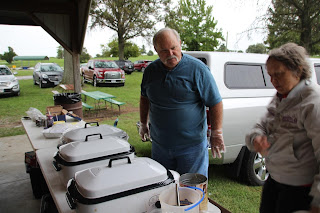 Charlie did some of the serving 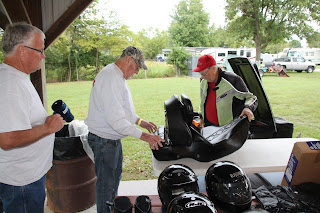 Willie putting out some items at the flea market 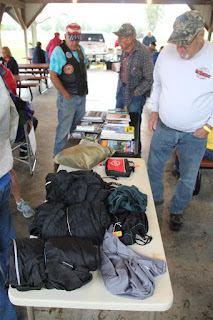 Some of the goodies for sale 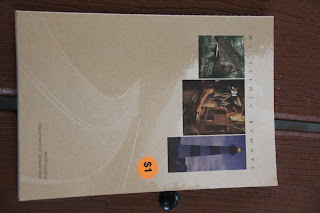 This should prove useful 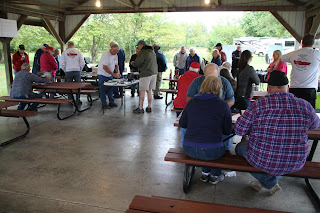 People were bundled up 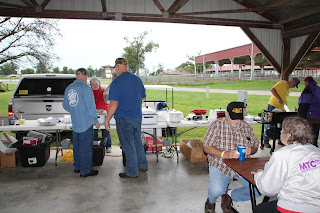 I wish we could buy sausage gravy in a can

Sandy and I returned to the hotel to start organizing our suitcases for our departure tomorrow morning. Willie was planning on leading a scenic ride at 10:00 AM with lunch at a restaurant in the village of Ava. Although I wasn't interested in riding in the wet, we said we might drive there in the car and meet them about 12:30.

I didn't receive word from Willie saying whether he had left or not, but we headed out about noon anyway. We ended up following a funeral procession south out of town and I was pleasantly surprised to see that almost every northbound vehicle pulled over the allow the procession to go by. It turned into a cemetery in Elkville while we continued on.

We reached Ava, a very small place, at 12:30 sharp. There were a lot of cars parked in front of Gabby's but no motorcycles. It was raining, so Sandy and I thought maybe no one was coming and considered moving on. Before we could decide, two bikes came around the corner. Willie was leading a couple on a trike and we found the restaurant had a room reserved for us. A call from Carlene suggested that there were ten more people in cars coming, so Willie apologized to the staff for the low turnout. In fact, the apology was not required because there were 25 people seated when all was said and done.

Gabby's must have learned their portion control from Lambert's and Kalin's. I ordered a mushroom/Swiss/bacon burger. The burger at Kalin's the other evening was extraordinary but this one was right up there too. Sandy had a BLT that she said had too much L and T, but that was easy to fix. The bacon looked like it had been cooked with a press.

One surprise was that when the server ran my US VISA card, it was declined. She was busy so I paid cash rather than make her go through the process again. I was concerned, however, and resolved to test this right away to see if a call to VISA would be necessary. 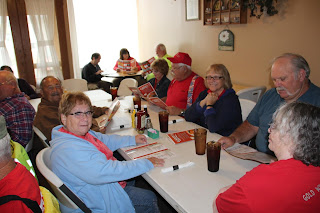 Gabby's Restaurant - our room was packed 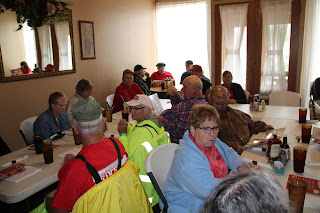 Not a vacant seat in the room 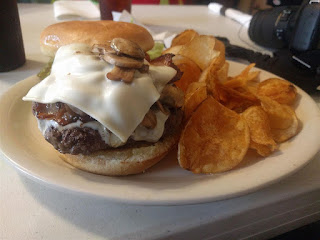 The burger was most excellent

After lunch, Sandy and I drove back to DuQuoin and stopped at the Moto Mart for fuel before returning to the hotel. The pump accepted my card with no problem. In the room, we found that the WiFi was working but it was slow.

We finished packing all except our overnight bags and, despite a light rain falling, loaded them into the car. Then I hooked up the trailer and loaded the bike in the wet. Finally, I made a list for our Customs folks of purchases we would be bringing into Canada with us. By the time we came out to drive to the fairgrounds for the closing activities at 5:00 PM, the rain had stopped.

I won a set of Cynoculars in the draw and Sandy pulled Willie's name as second prize in the 50/50 draw. Carlene thanked everyone for coming and Willie reminded everyone that next year's Ride In would be the 35th and also the last Carlene would be coordinating. It will again be the week after ES, so we very well might show up one more time. 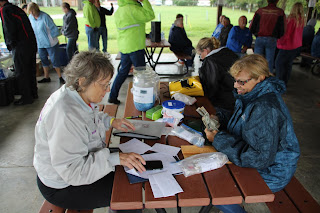 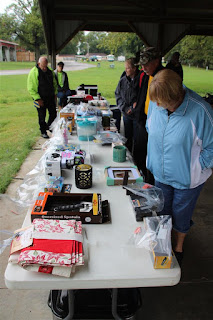 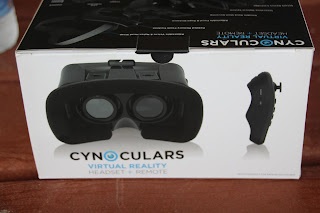 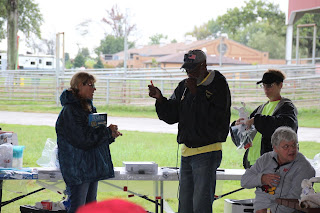 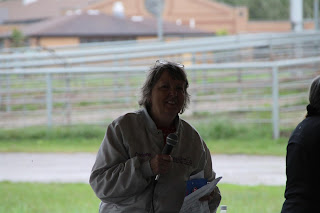 The Lovely Carlene with some closing comments

After the prizes and comments, they set up a very nice potluck supper. Sandy and I sat with author Steve and his wife Sandy from Carterville. Like most of the other people here, they were friendly, welcoming and very interesting.

It was not late when Sandy and I went back to the room. I set my alarm for 5:00 AM and we turned in early. 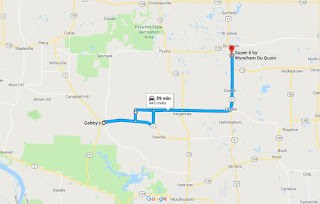 Please let us know how those cynoculars work Skid!
Love your blog and thank you to Sandy for allowing us along on your adventures by giving up moments with you to keep us informed.