My watch alarm went off at 5:00 AM. I was slow to get moving but Sandy was up and at 'em right away. Because I lagged, it was after 6:00 when we took the gear down to the car and went for breakfast in the indoor log cabin located in the hotel courtyard. 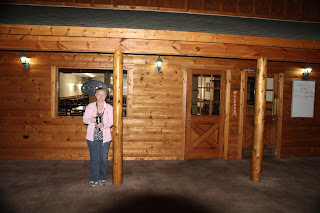 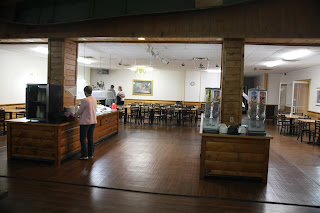 Not busy this early 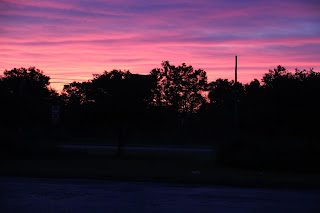 We took I-75 a short way south and then split to US 127 South and then US 10 West. We stopped at a McDonald's in Evart, Michigan where the staff was friendly and competent. They had both kiosks and our style muffins. Outside, I spoke to a lady with a dark red 2017 V6 Equinox Premier. She traded a 2013 just to get another V6. 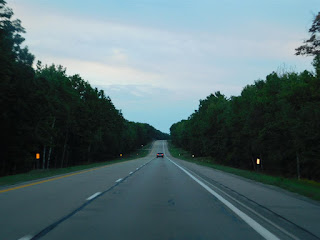 Too bad I can't convey the smell of dead skunk 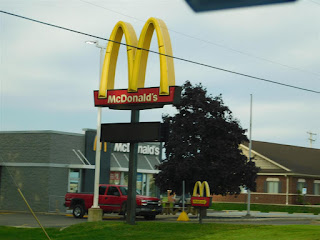 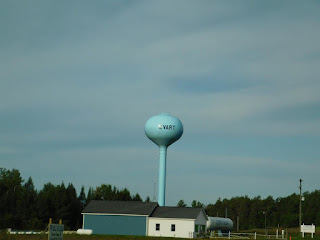 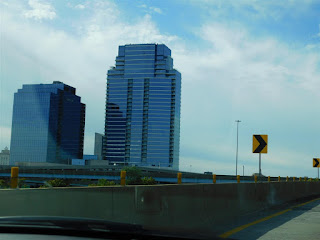 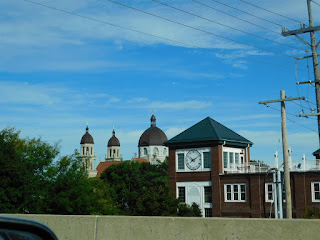 Some classic buildings as well 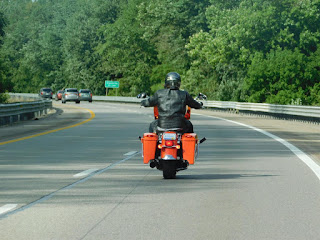 One of very few motorcycles today 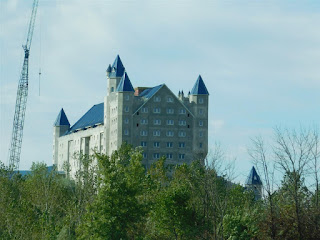 Thinking it would be better to fuel sooner rather than later, I saw a sign for a Speedway at an exit near Holland, Michigan. As I got off, there was another sign saying the station was 2.5 miles west, right in downtown Holland. Holland seemed to be a very nice town but we were trying to make some miles. Still, we were already off the big road so we went downtown. 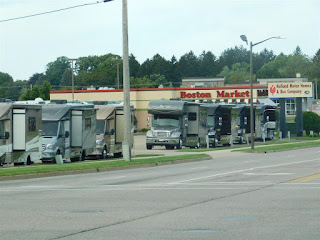 Someone is selling RV's in Holland

Refueled, we followed US 31 back to I-196. Billy Crystal's book had finished (we recommend it) and we sampled some of the seven others I had borrowed. I-196 took us to I-94 and then to I-80 West as we crossed into Indiana and Illinois. We didn't stop for the only toll booth because the local I-Pass system accepted our EZ-Pass. I hope. 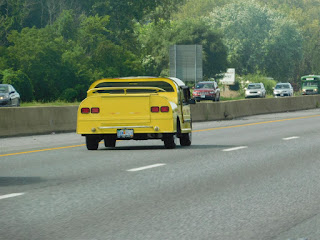 No idea what this was but we couldn't catch it 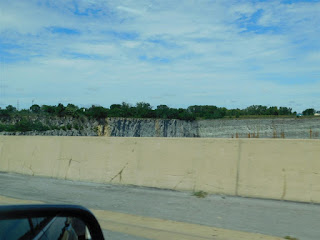 We stopped at a McDonald's just before Joliet, Illinois. The goal was a bathroom break but we got ten McNuggets on the way out. Soon after, we started south on I-55. 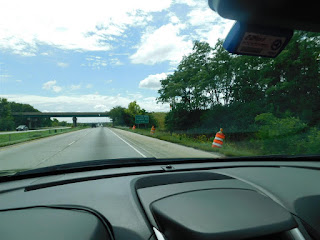 Lots of road work will be starting next week

As we were driving down I-55, we spoke to Sherm. He had  already checked into Stonegate Lodge in Eureka Springs and said they had new WiFi hardware. No idea about the speed yet. We had been planning to make it to Collinsville, Illinois (near St. Louis) tonight but decided to push farther. Possibly Rolla, Missouri. Then we called Zeke and left a voicemail to pay our respects as we hauled ass through Springfield. 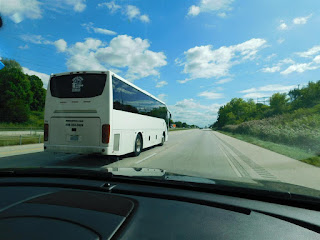 Turkish made bus near Springfield Illinois 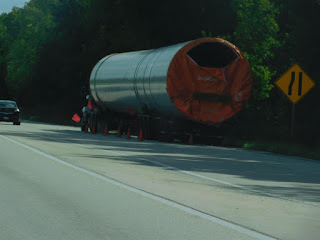 Rather than drive through St Louis, we exited at I-255 and crossed the Mississippi further south. 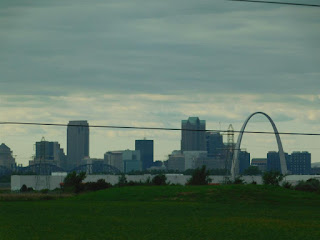 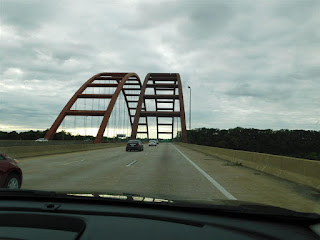 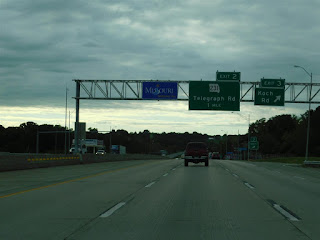 I-255 took us to I-44. We followed that up and down hills that often required two downshifts. The almost 18 MP(US)G I had been getting with the big tailwind rapidly eroded. 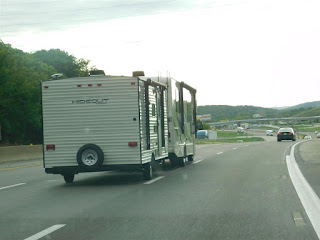 Motorhome towing an RV trailer - this was a first

I will stop here one day

We stopped at McDonald's in St. Clair, a few hundred feet from the Budget Lodging where we attended the Wolfman Wandering rally last year. They had kiosks but no muffins. We dined in while I used my Wyndham app to reserve a room at the Super 8 in Rolla.. I cheated and had a quarter pounder with cheese and fries to eat and Sandy found hat requesting no pickle on her hamburger also resulted in no mustard. Twice. 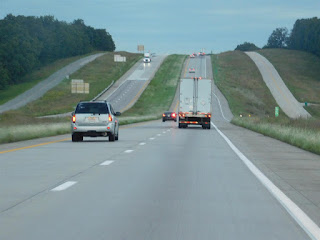 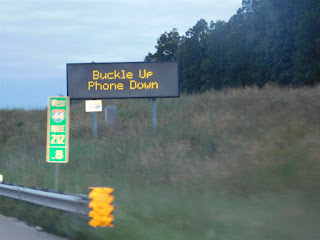 It was another hour to Rolla. The setting sun was behind clouds at first, but then made it hard to see for a while. Finally it set. 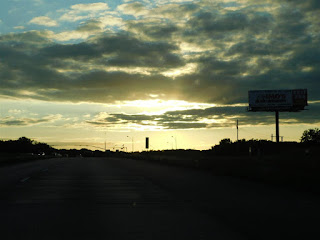 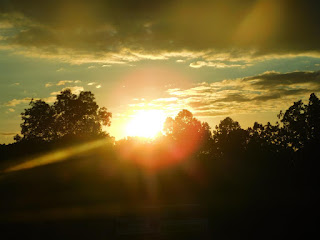 Direct sunlight is not 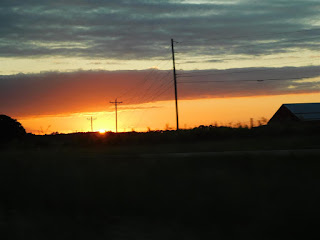 We rolled into the Super 8 in Rolla at about 8:00 PM. I found a place to park the trailer after loading our overnight bags on a cart. We were on the second floor but there was an elevator, so it wasn't bad. There was also a pool but I doubt we will have the time and energy for that.

Today was a  long one but we covered some serious ground. Going through Blue Eye Missouri, we only have 196 miles to cover tomorrow so we should be at the Stonegate before noon. 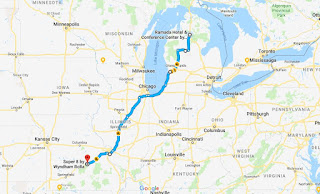