A Day With Ol' Phart and Karen

I slept in until 7:30, probably the latest morning of the summer. When I did get up, I was greeted by the sight of a pirate looking character at the kitchen table. 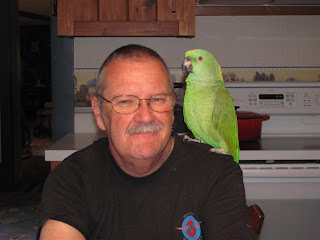 Over breakfast, we talked about motorcycles and why Joe wasn't comfortable on two wheels any more. The conversation turned to possible three wheel alternatives and I expressed my preference for a Can-Am Spyder rather than a conventional trike. Neither of us had actually ridden one so we all piled into their Subaru and we went to HK Powersports in Hookset, the local Kawasaki/Victory/Spyder dealer.

Joe has a long history with HK, who have been very supportive of the NEVROC Laconia Rally over the years. They brought out a Spyder ST, the mid-line model with bags and a taller windshield. Matt gave Joe some instruction and then he did some laps around the parking lot to get the feel of it. One brake pedal and no clutch with the semi-automatic transmission take some getting used to, and only those who have transitioned from two wheel to three know that what seems like a simple change can be tricky due to the counter-steering effect. Matt said most sledders have no problem with the Spyder. 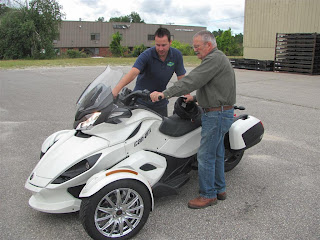 Matt explains the controls to Joe 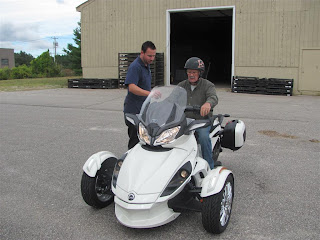 Where are  the levers again?

The ST is a bit Spartan compared to the RT versions with the full tour pack and touring amenities. Matt offered to bring one out to try but Joe said not right now. Matt also offered the opportunity to take an extended ride whenever they wanted. Armed now with a bit of first hand experience, Joe and Karen decided to put any action off until the spring. 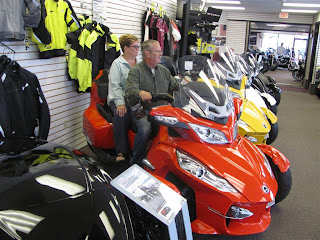 They look good on an RT-S

Back at the house, Joe took me on a tour of his wood shop. He builds fine intricate boxes for jewelry and the like but is well equipped to make anything in there. Being close to so many sharp tools worried me but I escaped unscathed.

Karen made turkey sandwiches for lunch. Along with dill pickles and olives (Sandy won't agree), it hit the spot. I called the surgeon again and Rachel still had no papers on me. Then I did some blog preparation and talked politics with Karen, before introducing our hosts to the comedy of Jeanne Robertson and a couple of others we listen to on XM. The lead-in was the famous Dallas recording of the four little old ladies who dealt severely with the man who hit their car in an intersection. 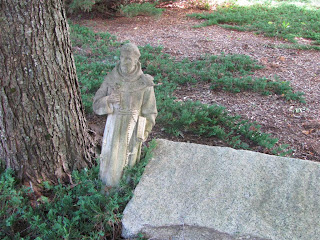 A peaceful spot in the garden 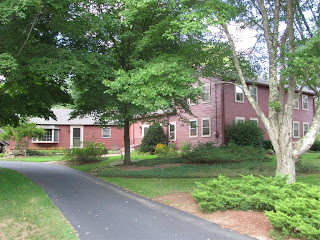 The old red house has a lot of class

For the evening, Brother Bear and I had arranged to meet at the Longhorn Restaurant for dinner. He would bring Laurie while Brad and Judy were coming up from Massachusetts. Now I only know one Longhorn, the place in Concord where we gathered every year to kick off the Laconia Rally. We arrived there before the appointed 7:30 PM time. The words Mall of New Hampshire in BB's email had not resonated with me. They conveyed no meaning. But the Mall of New Hampshire is in Manchester and it does have another Longhorn. Bottom line, we were in the wrong restaurant in the wrong town, and it was all my fault.

When it became apparent that our party was not meeting us in Concord, the manager called Manchester and located the crew. They were already into bread and drinks. Lucky for us, everything down here is pretty close and, after a fast drive down I-93, we walked into the correct place at 8:10. Nathalie, our server, was a pretty young lady from Montreal and she got beverage orders right away while we started catching up on who had been doing what for the summer. It was a great meal. Mine was sirloin and veggies while Sandy opted for a filet and a pina colada. Or two. 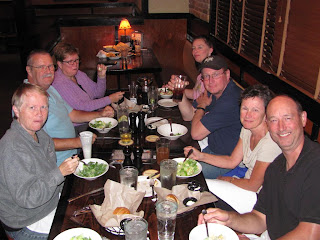 We hadn't seen any of these folks in a year and we all concluded that was way too long. Even though BB and Laurie don't ride any more either (due to a bad wreck last summer), the conclusion was that  we need to find reasons to get together more often. There was talk of a trip next year, not necessarily involving bikes, so we'll stay in touch over the winter to see if we can make that happen.

After supper, Karen drove us home. After a session trying to figure out Facebook on an iPad, I found and sent Joe the link to a website with the details. Then we hit the sack with visions of new trailers dancing in our heads. Or, at least, mine.
Posted by Jim "Skid" Robinson on 9/05/2013