This morning, there weren't a lot of people staying at the hotel, so they cut back on the breakfast quantities. As a result, they ran out of coffee and yogurt. Luckily, they replenished the counter just before we checked out so we took some with us. I got a (two, actually) sausage McMuffins at Mickey's before we left town and we were rolling southbound under grey, overcast skies by 8:30.

At our first rest area stop, there was a truck hauling a wind turbine blade. You don't realize how long these are when they are moving. It had a pilot vehicle and two state troopers for escort. They pulled out before us but we caught them down the road. After we went by, the lead police car accelerated and stayed with us. I wondered what was up until I saw him pull over and block an on ramp. That made sense since traffic merging with the blade would not be a good thing. 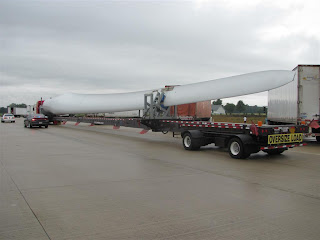 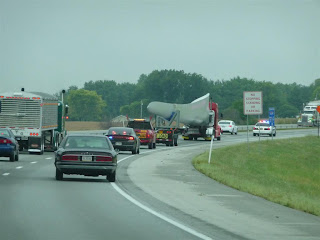 Catching up to the blade

We saw two other wide loads heading east, escorted by police. The second one actually had three escort cruisers. They seem to have a lot of officers available for this kind of work but I guess they are probably on extra duty.

I had planned to go straight through Indianapolis on I-70 because it was late in the morning and I expected traffic would be light. This proved to be impossible since several signs told us I-70 was closed through the city. We ended up taking the usual I-465 south circle road. I almost missed the I-70 West exit because I was in the wrong lane, but was able to cut over at the last minute. The Lane Select option on the new GPS units would be nice. As we made the turn, we went by the airport which has the big FedEx hub. 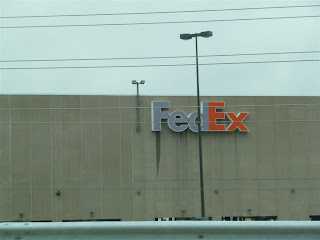 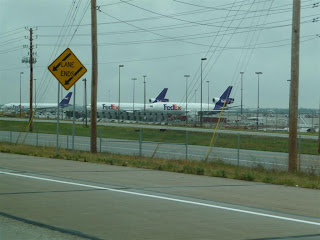 Some of the Fed-Ex fleet

Since we were heading into a headwind, I decided to tuck in behind a semi and let it punch the hole through the air. The big trailer was prone to buffeting in this situation but the little one did fine if I held about two seconds back.

We stopped in Plainfield, Indiana to get some lunch. The Speedway there had fuel for $3.339 and, even though I didn't need gas right now, I topped off anyway. 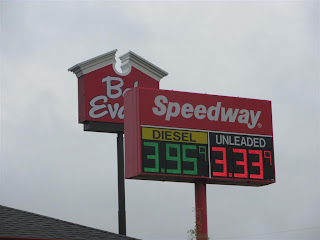 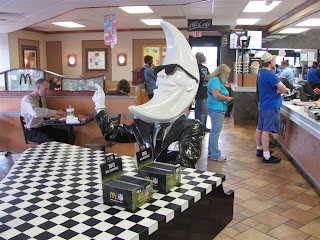 We have been surrounded by big trucks all day, but when we got back on I-70 there were none to be seen going our way. I set the cruise at 60 MPH and waited for one to catch us. Eventually it did and I tucked back in behind at 65. 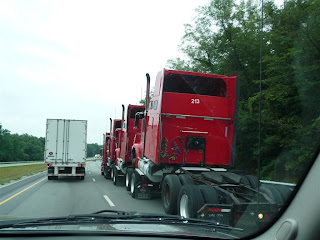 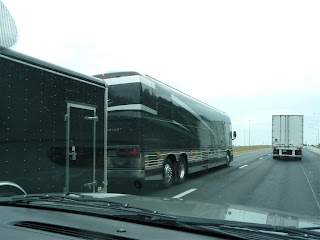 Prevost coach and car trailer - If I had a million dollars.....

I lost my front door (lead truck) at the scales after we crossed into Illinois, but picked up another one soon after. We made a bathroom stop in Montrose, a little crossroads with two small gas stations and some agricultural things going on. Then I hooked up with the truck we were to follow the rest of the way across the state. 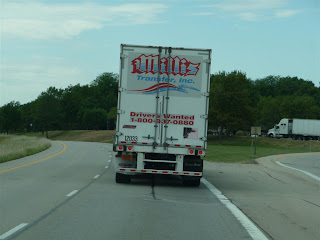 My view of Illinois

We arrived at the Super 8 in Collinsville, Illinois at 3:30 PM, which was really 2:30 here in the Central Time Zone. This was a nice spot but the whole cable system was out. No TV or Internet, but they said Charter was working on it. Even the motel office was having another location print and fax the forms they needed to check people in. 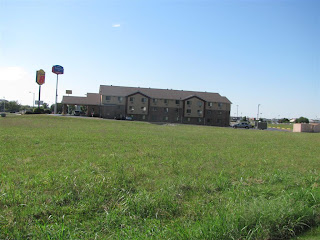 Sherm called about 3:00 and said he had just averted disaster due to a failed wheel bearing on his trailer. Thanks to a shop that knew how to get things done, he was now back on the road. Just about then, the TV came back on and I hoped the Internet wouldn't be far behind.

Sandy noticed in the Guest Directory that the Ponderosa Steakhouse next door had a Seniors Buffet from 2:00 to 4:00, so we wandered over. The salad bar had everything you could imagine; the meats included Swedish meatballs, BBQ chicken and fried chicken; and the drinks were included. I had salad, some meat balls and BBQ chicken, veggies and fruit for dessert. I skipped bread, several very good looking potato dishes and a dessert table. Willpower for once. Sandy had a little bit of dessert. 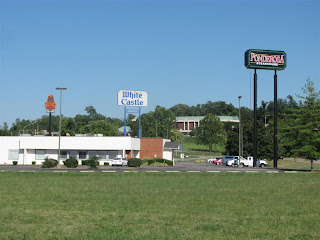 Back at the room, there was still no WiFi. I met a man outside whose big Volvo rig broke down yesterday. He was waiting for parts and was very bored. They said they might have him running today, Saturday at the latest. I know what it's like to be stranded and didn't envy him.

I worked off-line to get the photos sorted and the blog stories written. That accomplished, we watched some TV and dozed off at about 8:00 PM local time. 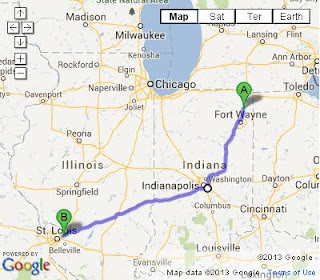 I bet truckers hate you when you tuck in behind them and lower their mpg. ;)