One problem with going to bed at 8:00 PM is that you will wake up at 3:30 AM. Both of us were up but there was still no WiFi (my respect for Charter, if I had any, was now gone) so we watched some TV. At 6:00, we went down to the lobby where Sandy had some cereal and yogurt. Then we packed up and drove to a nearby McDonald's where I had breakfast and we connected to the Internet via the free Wayport access. I posted the blog entry from the day before yesterday that I had drafted off-line last night and also booked a motel room at the Super 8 in West Memphis, Arkansas.

For more than ten years, we have gone through St. Louis at least twice a year and looked at the Gateway Arch from a distance, but we have never stopped. Until today. The Arch opens at 9:00 AM in the fall so we left Mickey D's just before 8:00. The drive into St.  Louis was uneventful except when the GPS told me to take the exit off I-55 to the Milking Bridge. It took a moment to realize that it was trying to say M L King Bridge. 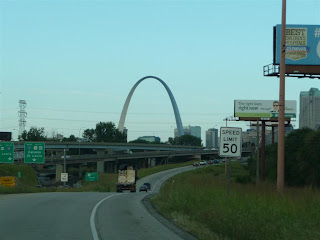 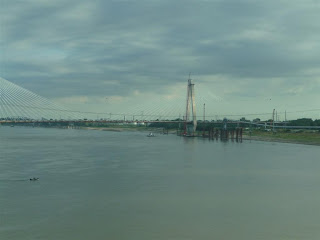 McKinley Bridge over the Mississippi River

The website said there was a parking area for buses and RV's. We drove around the perimeter of the site and saw indoor parking with a 7' height clearance. We asked two people (one a transit security officer) who didn't know where the RV parking was. We traveled down a very nasty cobblestone street. Finally, we found the spot along the waterfront on Leonor K Sullivan Drive marked for RV's and buses. No one else was there, so we parked and walked the half mile to the base of the Arch. 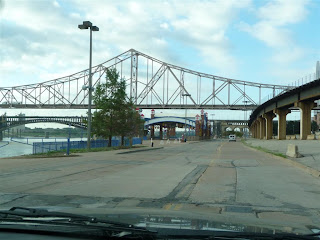 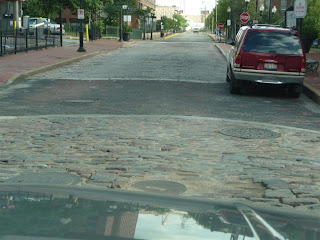 The cobblestones were really rough 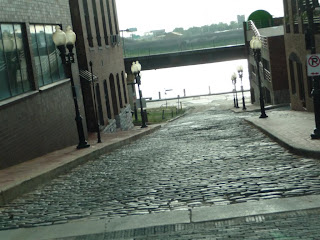 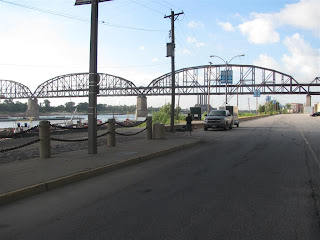 And finally, all alone, we got parked 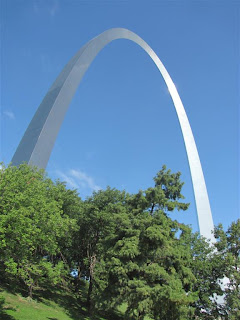 The arch is even more impressive up close 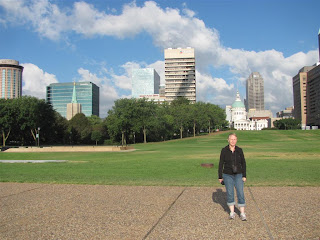 Sandy in the park 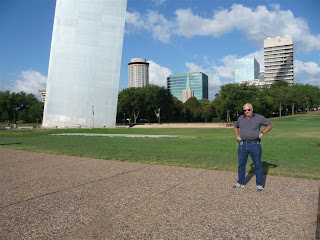 One foot of the Arch

We were a bit early and the Arch doors were still locked. When they opened at 9:00 AM, we passed through a security checkpoint that would rival any airport, except we got to keep our shoes on. But not our belts. I had forgotten to take my Buck knife off my belt so I put it in the basket with everything else out of my pockets. Either no one saw it or they figured it was under the 4" maximum length because no one said a thing and I put it back on my belt.

We bought tickets for the Journey To The Top and managed to get the 9:15 Tram. There was a group of motorcyclists there wearing HD paraphernalia. From their styles and manner, I pegged them as German tourists on a Harley tour. Bang on. They were on the same tram but we got into a different (hit my head twice) five seat car with a couple from Paducah who were picking up a VW Westphalia van later today and a gentleman from Redding, California who once owned a Westphalia.

The car ascended, periodically making adjustments to stay level. The ride up took four minutes and all we could see out the window was the staircase ascending the inside of the Arch. At the top, windows allowed views to the east and west. Although neither of us like heights, there was no problem the way this was set up. 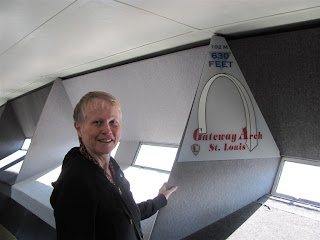 Sandy at the top of the Arch 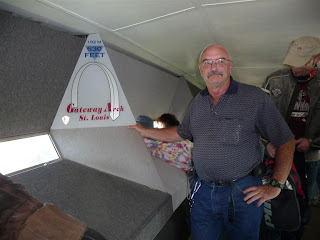 And yours truly on the other side 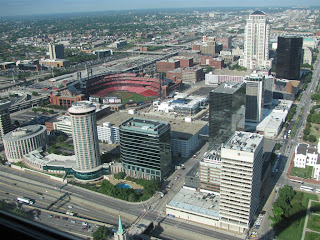 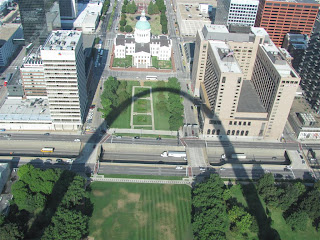 The Arch casts a giant shadow

We caught the Tram back down, a ride that only took three minutes. The Museum of Westward Expansion was included in the price so we spent some time looking at the exhibits, most of which dealt with the Lewis and Clark Expedition to explore a route to the west coast. Tom Jefferson, who had just completed the Louisiana Purchase, saw the potential of a nation stretching from coast to coast. 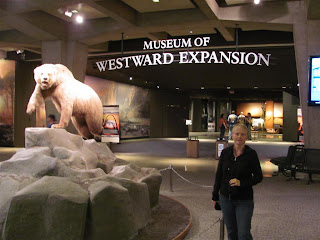 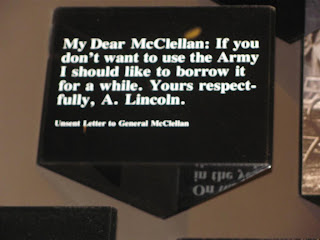 Abe Lincoln did know how to use words effectively 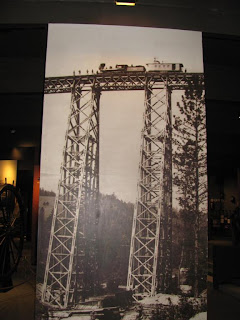 Hard to believe they would even try to build this 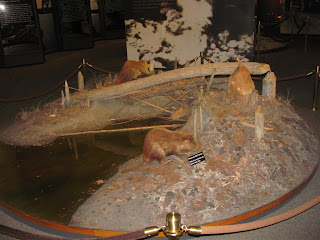 Beavers (aka vermin in my neck of the woods) 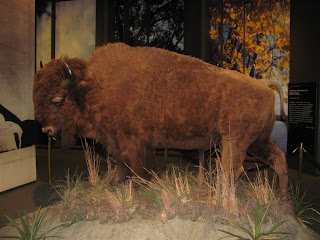 There was also a section on the Indians (Native Americans?) and how they were treated by the US Government. It wasn't a pretty story in most cases.

I did see one example of revisionist history when an exhibit referred to the Emancipation Proclamation with the following quote:

"all persons held as slaves within any State.... shall be then, thenceforward, and forever free."

The actual unedited quote was:

"all persons held as slaves within any State or designated part of a State, the people whereof shall then be in rebellion against the United States, shall be then, thenceforward, and forever free."

See the difference? People keep saying how Lincoln freed the slaves with this proclamation but, in reality, it only freed those slaves held in the Confederacy. There were four Union states that allowed slavery and those slaves remained in servitude. The 13th Amendment did abolish slavery after the war and Lincoln was the author, but this display looked like a deliberate attempt to whitewash the blatantly political/military aims in 1863 proclamation.

After finishing our tour of the museum, we left the Arch and headed back to the truck. 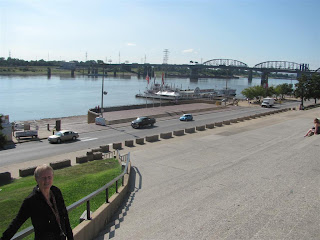 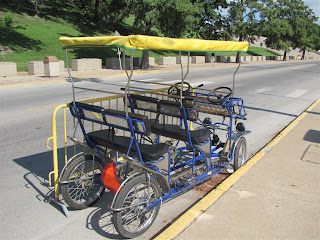 Rental cycle where everyone contributes

We were on the road on I-55 to West Memphis, Arkansas by 10:30 AM. We normally head out on I-44 and this was our first time ever on this highway. We had a tailwind and I idled along at 60 MPH until a big rig came by doing 65, and then I tucked in behind. If mileage was good with someone to break a headwind, it was great with the wind behind us. There is a sweet spot about two seconds back where the fuel consumption seemed to be at its lowest. 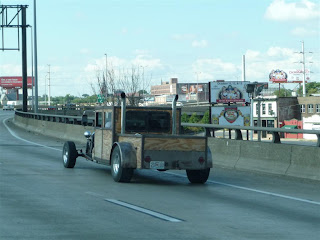 OK, this was a home built something

One odd thing was a convoy of five white Crown Victoria's that passed us. They had light bars but no markings or plates. Obviously new, they were being delivered to somewhere. The odd thing was that these cars, all made in St. Thomas, Ontario, went out of production in 2011. I wonder where they got them? 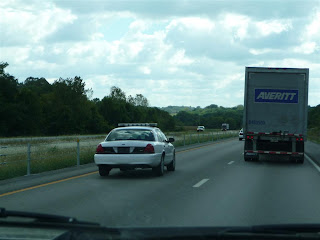 Crown Vic's on the move

We stopped in Perryville, Missouri for lunch at McDonald's. This time, we actually ate in the restaurant and I got yesterday's blog posted. I was finally UP TO DATE!!!!!!! Sandy had some McNuggets and her usual Blueberry-Pomegranate Smoothie while I had milk and tried the new chicken bacon wrap. It comes in a cardboard sleeve that you tear the top off to give you a handhold. But excess ranch dressing required several napkins after eating the bottom half. Still, it was good. Sherm called to say all was well and he had found us a motel in Mena, Arkansas for the weekend.

The fuel price next door was $3.239 so I topped off before we got back on the road.

Near the Arkansas line, I was getting very drowsy and pulled into a rest area. A few minutes walking around and talking to a trucker from Chicago and I was ready to go again. The land leveled out and I followed one truck for almost 100 miles. The road got noticeably rougher as we entered Arkansas but smoothed out again after a few miles. Almost every town had a Drury Inn, a chain Sandy and I have stayed at a couple of times and really like. Unfortunately, they aren't country-wide. We also saw a Stuckey's sign. And then we saw an actual open Stuckey's. It was looking rough but was still in business. 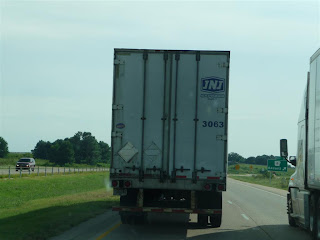 I followed this same truck for almost 100 miles

We arrived at the Super 8, located at the junction of I-55 and I-40 in West Memphis, at 4:30. After I took care of some business related to Sunday's MS Golf Tournament in Sudbury, we walked next door to the Iron Skillet Restaurant at the Petro truckstop. The had a buffet but we ordered a la carte. Sandy had a chicken fiesta salad while I had a meat lovers omelette sans potatoes. They offered tomatoes instead of spuds and delivered five thick, large slices. Sherm would have loved it. 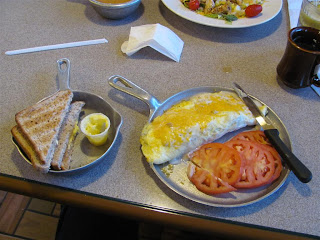 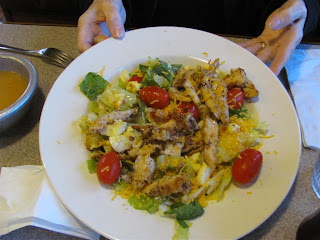 Back at the room, I posted my bills for the day and worked on today's blog. I got caught up today and plan to stay that way.

Tomorrow, we plan to tour Graceland and then head for Mena to join Sherm. 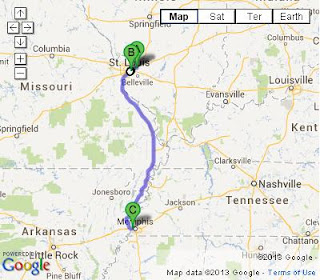 I enjoyed your visit to the Arch, Skid. Interesting for me to see the road by the river that was flooded over and not accessible when I visited.
Safe journey!