We woke to the sound of large thunder boomers this morning. I didn't get up until 7:30, the last in the house to rise. Over coffee, I finished getting the blog up to date while the others watched some TV and discussed kids names. Sandy realized that we will have no input into what the new grandchild will be called. The big news of the morning was the large fire that destroyed the main building at the famous St. Jacobs Farmers Market. 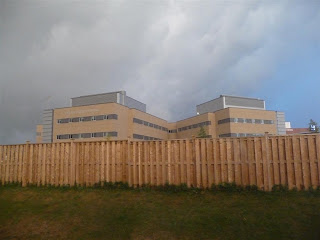 Storm over the new Woodstock Hospital

At 9:00 AM, we headed over to the Travel Center of America truckstop for breakfast. After consulting the menu, we realized we would have more control at about the same price if we went for the buffet. This allowed me to avoid the toast and hashbrowns so I stuck with meat and eggs. I was disappointed that they didn't have a selection of fruit.On the way back to the house, there was another black storm cloud on the horizon.

We left Woodstock at 11:00 AM and fueled at the Flying J at Ayr for $1.284 per liter, by far the cheapest gas around. I decided not to take a chance on going near Toronto so we cut up on Highway 24 through Guelph. Leaving Erin, we saw an 18 wheeler that misjudged the curve coming into town and was laying on its side off the road. There were four O.P.P. vehicles attending (ironically it was across the road from a Tim Horton's), meaning there would be no vehicles patrolling the highway for the next few miles. 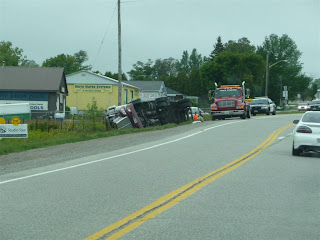 Reaching Highway 400, we started north and saw the other side was three lanes of mostly stopped or crawling cars as people tried to get back into Toronto after the long weekend. We stopped at the new On Route (sic) Service Centre in Barrie where Sandy settled for fruit yogurt and a smoothie while I had a bacon and tomato panini and coffee to go. 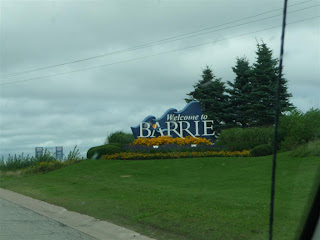 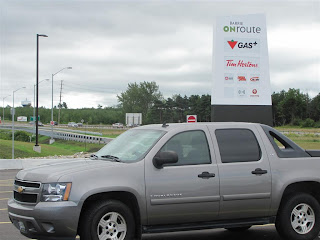 The new Barrie northbound On Route is open 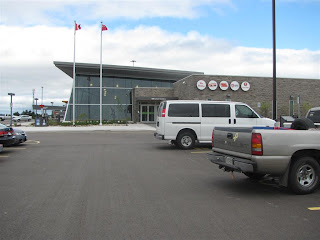 Leaving Barrie, we could see more vehicles lined up southbound. Traffic was stopped to about five miles north of where Highway 400 met Highway 11 and vehicles were adding to the jam at about 100 per minute. Soon, this line would be backed up to Waubaushene, thirty miles north. The rest of the way to Parry Sound, there were spots where someone must have put the brakes on and everything would grind to a halt. But, being northerners, we sailed along with no interference. 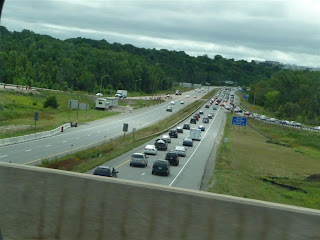 Southbound at the Highways 400 and 11 interchange 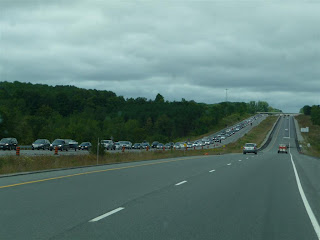 It is good to be northbound

North of Parry Sound, the southbound traffic tapered off but we were faced with a new situation. We caught up to a Dodge pickup truck towing a trailer that was following a silver Ford minivan at about the speed limit or a bit less. We could see the van wandering from over the centre line to over the fog line and back. This continued for several miles before I decided to call 911.

The 911 operator connected me to the O.P.P. Communications Centre in North Bay and I told them who I was, where I was and what I was seeing. The truck didn't pass the van in several passing lanes so I suspected they were together. As we reached the Magnetawan Bridge, we met an O.P.P. Tahoe that hit the brakes and turned but got stuck behind the line of traffic behind us. As we got to the passing lane before Still River, I could see the Tahoe get free of the line and, as he caught us at speed in Still, I pulled over to let him by.

Behind the truck, the cruiser (not sure if you can call a Tahoe this) engaged his roof lights but the truck didn't seem to notice him. This went on for close to a mile before he pulled around and in behind the van, which did stop immediately. he also waved the truck over and I stopped a ways back to see if the constable would need any information from me.

As we sat there, another Tahoe pulled up behind us with two officers in it. I got out and found the passenger was Constable Lorne M., someone I had met several times before. They were just passing through and stopped to see if assistance was required. After checking, he told me the driver was not impaired, at least by alcohol. An older lady, she was driving with an eye patch and could not see very well. Not required any more, I pulled back on the road following Lorne and his partner back towards Sudbury. 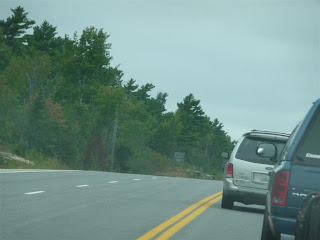 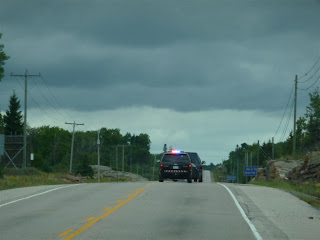 O.P.P. trying to get truck to move over 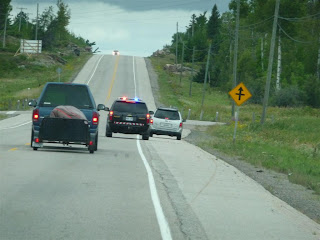 And pulling over the van

A marked police vehicle has a problem when trying to get somewhere on a two lane road. Everyone who sees it in their rear view mirror scrupulously holds to the speed limit. Making this worse, there was a long construction zone flagged at 70 KPH and the cars ahead of Lorne's black and white did just that. By the time we got made it to the four lane, there was at least a mile of traffic behind us. Then the Tahoe went around and accelerated to 110 in the 100 zone. The cars tried to go but no one had the nerve to pass it. Finally, the Tahoe put the hammer down and left us to sort ourselves out. 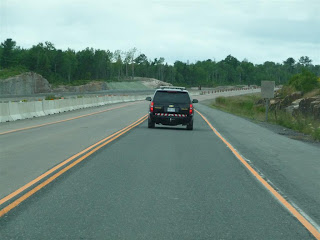 We pulled into the driveway just before 5:00 PM. After unpacking, I mowed our lawn and the neighbor's. I had just cut it last Wednesday and this isn't supposed to be growing season but I guess we have had the right combination of wet and sunny. Then I took the truck for fuel. The lowest price around was $1.386, over $0.10 per liter (almost $0.40 per USG) higher than Ayr.

We have a busy day tomorrow getting things in order so we can leave early Wednesday morning to pick up the new trailer in New Hampshire. 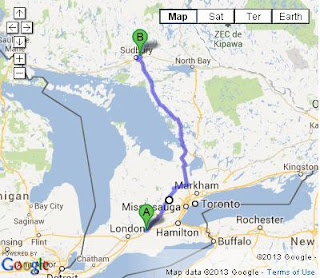