We were all awake before 6:00 AM, but we started the day slowly. Both Sherm and I adjusted the tire pressures on the bikes and I pulled the seat on mine to replace the plug for Sandy's electric jacket liner. Sherm had diagnosed a broken ground wire in Kingman and, although I got the plug when we got back, I seemed to be short on round tuits and only just put it on.

Some of the other crowd had already left to head back home to Oklahoma while the rest were planning to ride the Pig Trail to Eureka Springs. The Limetree doesn't have a complimentary continental breakfast but it does offer a breakfast buffet  for a fee. The promises we made to cut back on food after last night's buffet were forgotten as we settled down to eat. 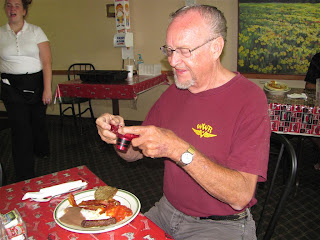 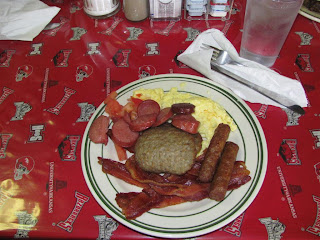 My simple start to the day

There were a couple of gas stations Sherm had found that had No Ethanol fuel at a premium price. We like pure gas (better fuel mileage) and rode through town to one of them. It was closed. Then we rode back past the picturesque Mena train station to the other and filled our tanks. On the way out of the lot, Sherm pulled up to the Stop sign and then turned right. I planned to come up the grade, look and then do a Hollywood stop on the awkward camber. I looked left and, just as I was ready to let the clutch out, looked right to see a police cruiser in the turning lane. Better stop. The bike almost fell over right there on the slanted pavement. Sandy said the cop looked back but she couldn't read his expression. 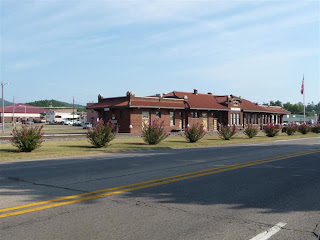 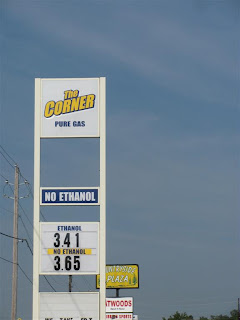 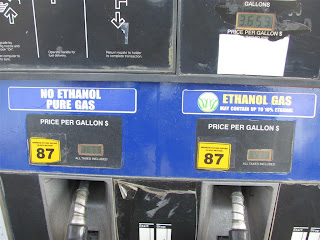 Fueled and not wrecked, Sherm led us through the old Mena downtown and onto the Talimena Scenic Drive, so named because it travels the ridge of the Winding Stair Mountains (part of the Ouachita Range) between Talihina Oklahoma and Mena, Arkansas. It was also the reason we were here. (I later found out that the novel True Grit was partly set in the Winding Stair Mountains.)

The lodge at Queen Wilhelmina State Park was closed for renovations. Sherm said this would have been a great place for breakfast. It was more than half way across the 54 mile length before we encountered our first other vehicle. At the Sunset Vista, we stopped for some photos and then started to see a few bikes. I would have expected more traffic on a Sunday, but wasn't complaining. Sherm said this place will go crazy when the leaves start to change colours.

My impression is that this reminds me a lot of the Cherohala Skyway between North Carolina and Tennessee. It isn't intensely winding or technical. Most of the corners are sweepers, although there are a few tighter radius ones, and there are many elevation changes. It was an enjoyable ride and I was glad we came. 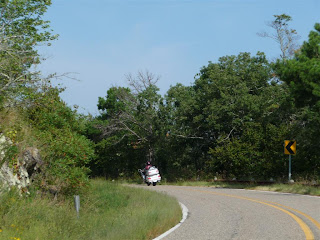 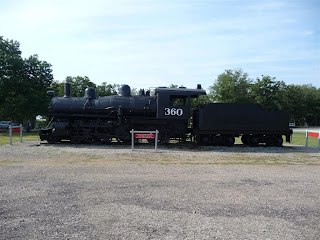 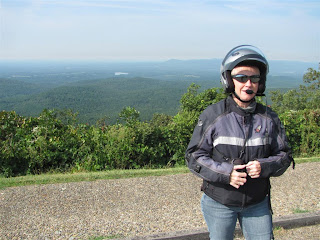 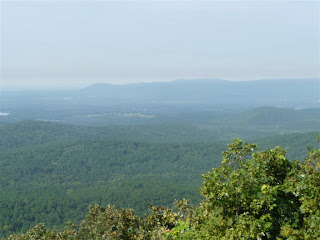 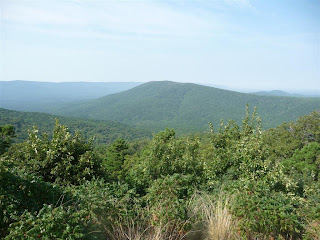 Mountains aren't high but they are pretty 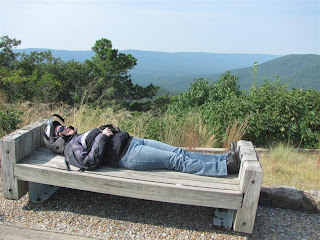 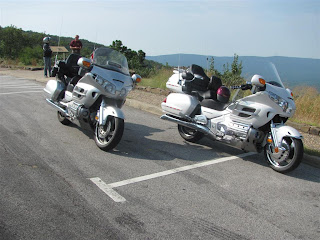 Th old and the new 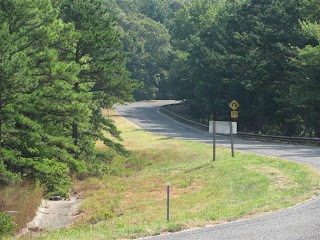 Our type of road 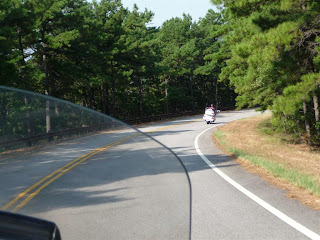 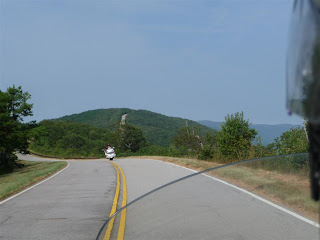 That is our road going over the next mountain

Coming off the Talimena, we rode into the little town of Talihina, Oklahoma. Stopping at a Shell station for a break, we found the part of the  group from the motel that had left early to go home to Oklahoma. Then we took SR 63 back to Mena. Running just below the edge of the mountains, this road was mostly straight and mostly 65 MPH. 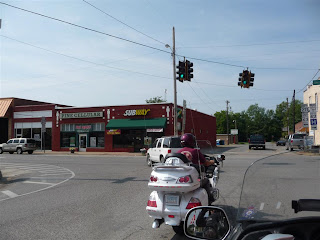 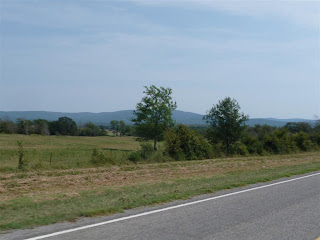 It was around noon when we got back to Mena. We stopped at McDonald's so Sandy could get her daily smoothie. Church must have just gotten out because it wasn't busy when we went in but it was packed by the time we left.

The temperature was 85 degrees as we left town the other way on 88 to Pine Ridge and the Lum and Abner Jot 'Em Down Store. I guess I led an underprivileged childhood because I had never heard of these radio stars from the 30's and 40's and their contribution to hillbilly lore. Their backwoods personas, while appearing simple, were actually smarter than the average city folk. Lum and Abner, in character, actually made a series of movies as well. I spent some time talking politics and genealogy with Cathy, the lady working in the store/museum. The post office here has been running continuously since 1886 with original equipment. 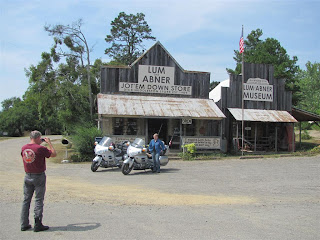 I felt really good riding back to Mena on 88. Totally in The Zone. Then we were there. Riding was done. Sherm loaded his Wing on the unique Easy Hauler trailer. I helped guide it because the rear tire is wider than the channel it is supposed to ride in. Then I loaded ours, an easy exercise. 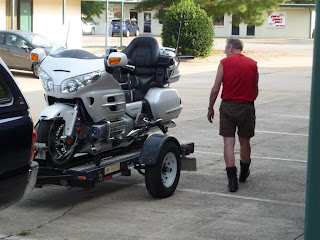 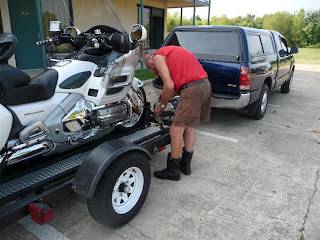 
One thing we had forgotten to check out was an airplane Sherm had seen while out riding yesterday. I needed a shakedown run to set the straps in the trailer, so we jumped in the truck and drove out Highway 8 past the Mena International Municipal Airport. Lo and behold, there in the middle of a field was a Boeing 727. The engines had been removed but everything else looked intact. 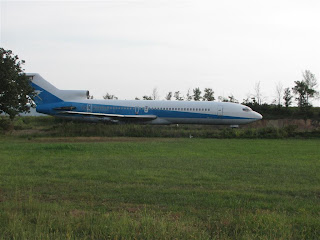 A strange place to park an airliner 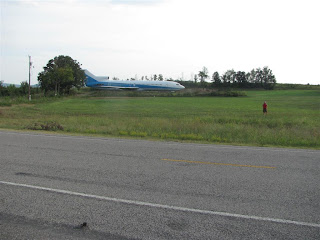 On the way back, we stopped at WalMart for a few things and picked up salads from the Deli section to take back to the room. The folks at the checkout said they thought the 727 was the first stage of what was supposed to be a museum but they weren't too sure. Back at the room, Sandy and I watched the second last (ever) episode of Dexter on a very unclear channel on the TV and the we turned in early. 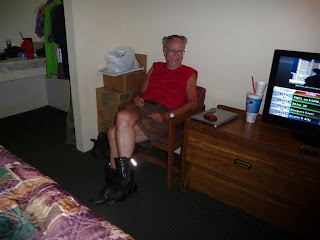 Sherm's blogging is done for the day 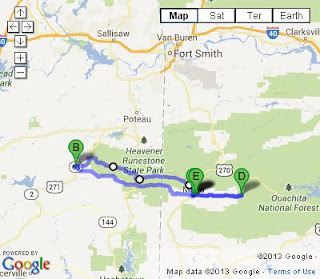