It was 34 F this morning. Talk about frost on the pumpkin. We were up by 6:00 AM and had a light breakfast. Karen remembered that Sandy liked raisin bran and had gotten her a box while I had some of the leftover honeydew melon from yesterday. We bid Joe and Karen a fond adieu with many thanks for the hospitality and were on the road to Milton by 7:20.

The tire pressure sensors were showing 26 PSI instead of the specified 30 due to the cold temperature. It won't be long until I'll have to do an adjustment for winter. We took Highway 28 to 4 to 202 to 16 and found ourselves at the PROLine shop at about 8:10. The trailer was sitting out front and, after the required paperwork and payments were complete, Tom helped hook it up. There was another fellow there from Gatineau picking up a 6 x 12 that he will carry a dynamometer in. 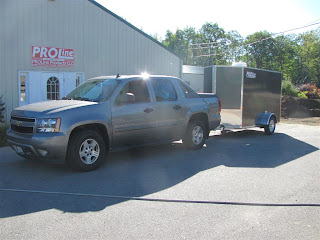 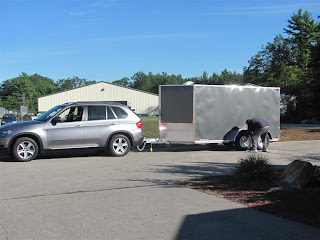 The little trailer just fits in the truck's tire tracks and I don't  need the extended mirrors to see behind me. I punched Home into the GPS and it wanted to route me through Montreal. I overrode that and specified I-89, so it had us retrace our route back to Epsom. On the winding 202, an excellent motorcycle road, it showed how much easier it was to tow than the larger trailer. I did note that New Hampshire seemed to have a large number of troopers to guard construction zones. We stopped in Northwood on Highway 4 for gas and a breakfast sandwich from Dunkin' Donuts.

By 10:15, we were headed north on I-89. The grades are long here and mostly uphill. Still, the mileage computer was indicating that we were getting 14 MP(US)G, a number we never saw with the larger unit. It was a bright, sunny day but fall was in the air as the temperature only rose to 17 C. 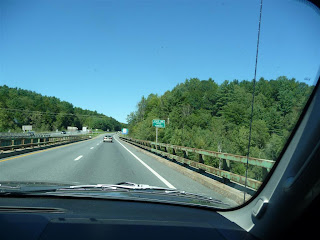 We stopped again in Swanton, Vermont for fuel and a McDonald's lunch to go. Then we proceeded east to Highway 2 and the bridge to New York. 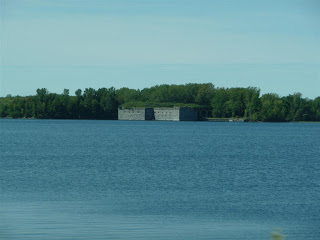 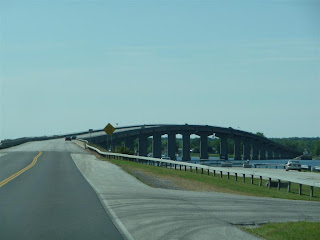 I debated which border crossing to use because Rouse's Point and Champlain were close, but they both led into Quebec and connecting to Highway 417 looked tricky. I finally opted to retrace our route back to Cornwall. 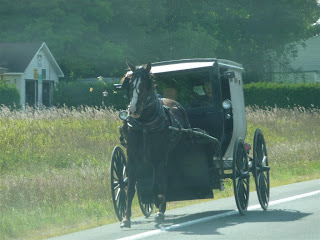 We approached the border around 4:00 PM. The first bridge took us to Cornwall Island where the border checkpoint used to be. This island is Canadian but is also part of the Akwesasne Mohawk reserve.When the government decided to arm Canadian Border Services agents, the native leaders protested and the checkpoint was abandoned in favour of a makeshift setup at the end of the second bridge in Cornwall. 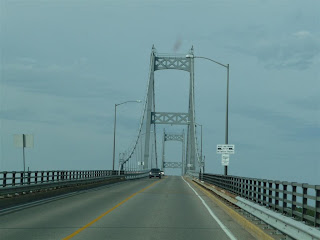 The bridge to Cornwall island 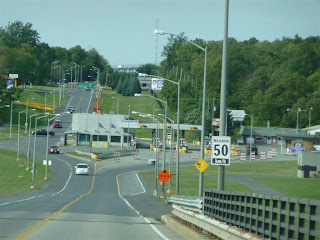 We arrived at the CBSA booth and declared the trailer. The agent gave us a slip of paper and sent up to the office, a shabby looking portable building (read trailer) where we went in and turned our paperwork over to one of the agents. He was carrying a 9 mm pistol on his hip. He prepared our Form 1 and stamped it after I paid him 5% of the Canadian value of the trailer to cover the GST. I also paid him $195 plus HST to cover the  fee for the Registrar of Imported Vehicles and he entered the information in the RIV database. We were on our merry way by 4:45.

After going northwest on 138 to 417, we headed west towards Ottawa into a strong headwind. It was the tail end of Friday rush hour. Some of the drivers here are nuts but they must be good to survive this kind of driving day in and day out. Once through the city, the traffic was lighter than expected for a Friday evening. 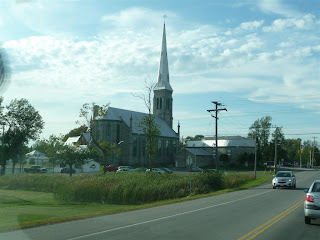 We made a quick stop at Subway in Arnprior and got a ham and Swiss sandwich that we split on the road. Unfortunately, they were out of cookies. We usually take one each as part of a meal deal.

I was averaging 14 MPG into the headwind at 90 KPH (55 MPH) and I was happy with that. The sun went down on us as we passed Pembroke (Ontario, not NH). After gas and coffee to go in Deep River, we found ourselves pretty much alone on Highway 17. The night was clear and the driving was good until it started to rain in Mattawa. The same Mattawa where the rain started on the way down. I sensed a trend developing. The fuel mileage fell off suddenly and inexplicably, making me wonder just how much ethanol was really in the gas at the Canadian Tire in Deep River.

North Bay needs a bypass to its bypass. I decided this after catching ever red light on Highway 17 around town. One more quick bathroom break in Sturgeon Falls and we pulled into our subdivision at 12:25 AM. It took me three tries to back the trailer into the driveway, reminding me that shorter trailers are more of a challenge in reverse than longer ones. With all we did today, a run of 737 miles was respectable.

Now we need to see how long it takes for RIV to get me the required inspection forms so we can get this baby registered and head out to Arkansas. I'd like to leave Tuesday morning but we'll have to wait and see. 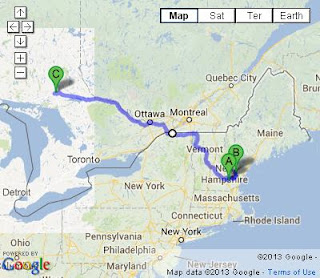