The check-in at Fontana Village Resort was 4:00 PM this afternoon and the drive was projected to take about 3 1/2 hours, so we were not in a hurry this morning. After lazing around, packing the bags, checking out, talking to some nice ladies from Charlotte in the parking lot and stopping at the grocery store next door for sugar snap peas and hummus, we were rolling around 10:30.

Retracing our steps from yesterday down TN 75 and NC 44, we turned right on US 421. This took us the TN 394 (Tennessee Ernie Ford Parkway) to US 19W through Johnson City to I-26 East (which really went south at this point). I was mindful of what The Mighty Stonewall, a friend from Woodbridge Ontario, said about how far away places can get to seem like home after a while. This journey had become like that for us. 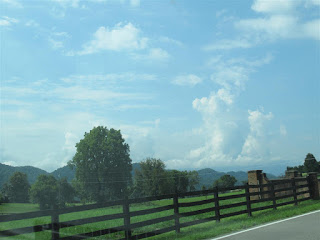 Some pop up clouds were growing over the ridge 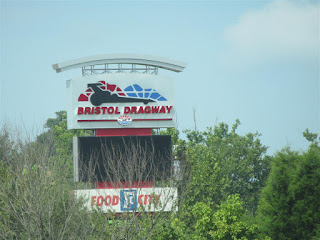 The Valley Of Thunder

We stopped at the WalMart in Unicoi, Tennessee for some snack things and to see if they had a replacement for the worn out Velcro (sorry Dawn, hook and loop) watch band for my Timex Expedition watch. We got the food just fine but the young lady who finally responded after I rang the service bell at the jewelry counter didn't seem too knowledgeable or interested in selling me anything.

From Unicoi, we continued south on I-26 up over Sams Gap into North Carolina. This, Wolf Laurel and Buckner Gap are as familiar to us as most places back home. 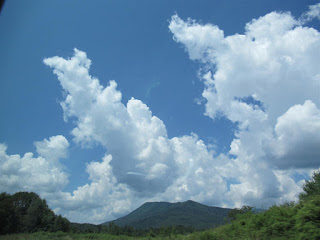 Clouds still building on the ridge 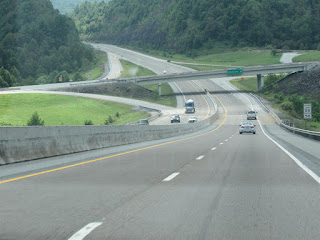 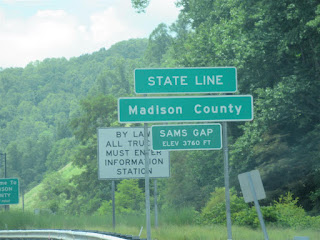 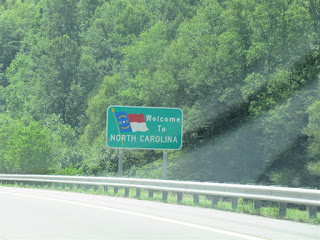 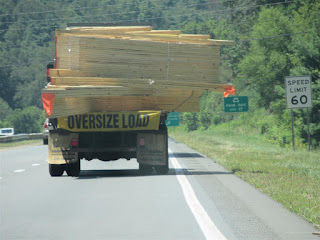 This looked a little odd to us

We skirted Asheville, NC on I-240 to I-40 west. The traffic was moderately heavy and, on the long upgrade, a couple of big rigs passed us accelerating, indicating that they had no lack of horsepower. Near the US 74 exit, we could see clouds building and some raindrops started to fall. For a short stretch passing Waynesville, there was a torrential downpour but, by the time we got to the WalMart, it had eased to a light shower. 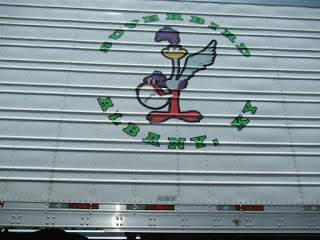 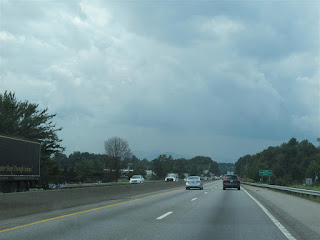 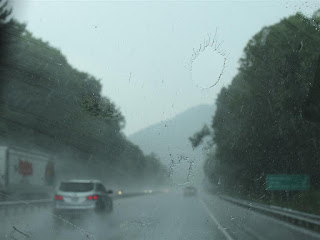 Heavy downpour on US 74

I had intended to stop at Clyde's Restaurant in Waynesville for lunch. As luck would have it, they close on Mondays. We had some of the snacks from the cooler instead. The young lady at this WalMart was happy to install a new generic watch band for me.

After following US 74 past the Cherokee and Bryson City exits, we stopped at the BP station just before NC 28 to fuel the car. I took photos 180 degrees opposed to each other, one showing blue sky and the other showing black clouds. 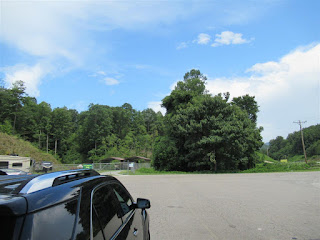 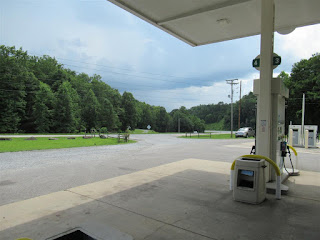 NC 28, also known as The Hellbender and part of Moonshiner 28, was interesting while towing a trailer. No one caught up to us until right near the very end, when I pulled off to let a van go by. Then we got behind a Chev Traverse coming from Fontana Dam and, through the tightest stretch of curves, we kept up to it right to the Fontana Village Resort entrance. 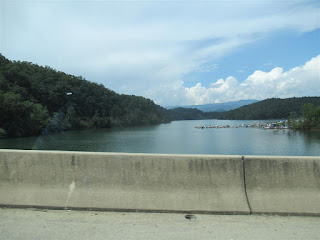 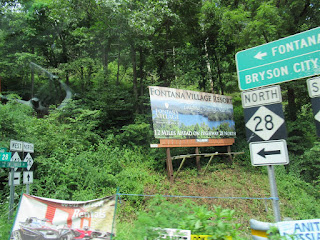 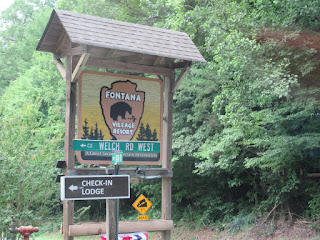 After pulling up to the lodge, where old friends Ice Cream (David) and Sharon were also just arriving, we met Karen at the desk. We would have to leave the trailer in a designated parking lot down by the General Store and then put the car in the Cabana Rooms lot. I unloaded the bike first and left it in the Lodge lot for the time being. This place has a lot of roads and buildings so some orientation will be necessary.

Our cabana room was on the second floor from the parking lot, necessitating hauling all the gear up a flight of stairs. But the back door was on the same level as the pool, which sat between us and the Lodge. Southern Draw and Southern Charm (Bill & Carolyn) had already set up the Kaw Pasture outside their room by the pool. 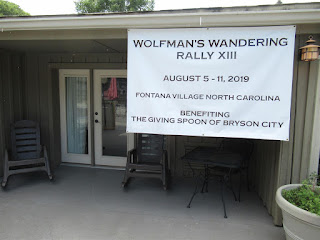 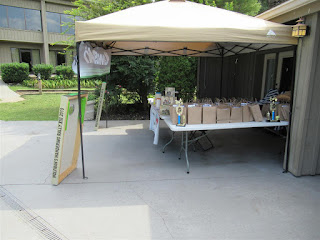 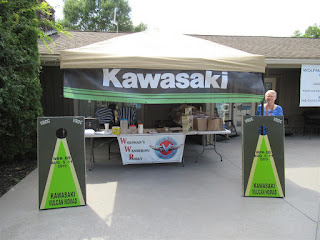 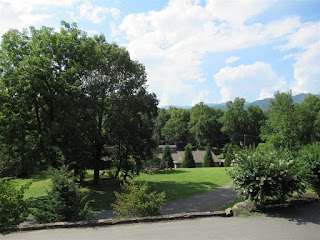 View out our front door 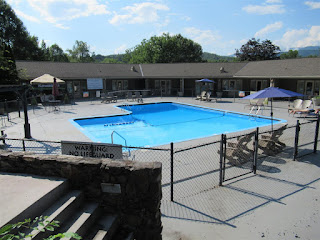 Our room is right in the middle 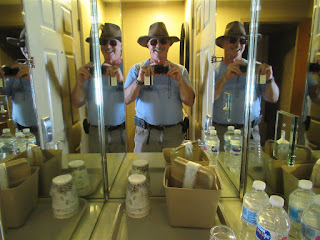 I have a new hat

We had a lot of people here considering that it was early in the week. After sitting around and catching up with folks, we headed down to the Wildwood Grill for supper. The service was glacially slow but my mushroom/Swiss burger (no bun) and coleslaw was excellent. Then we came back up to the pool and had a few drinks and whatever, mostly picking on Mad Kaw. 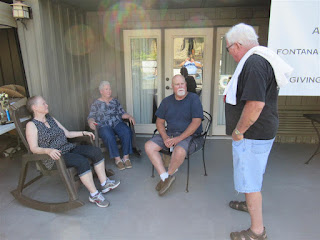 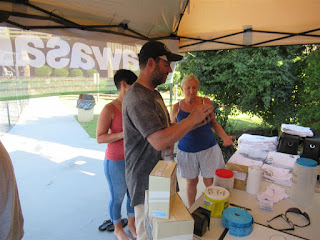 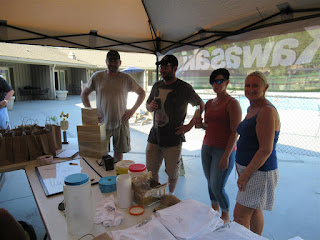 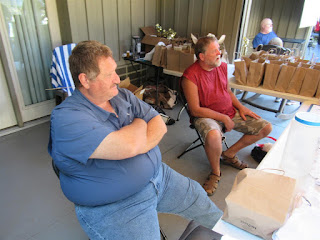 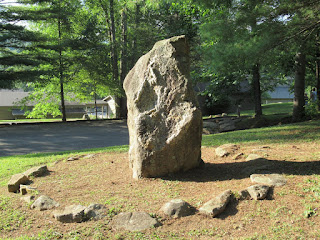 I wonder f this would transport someone back to 1740? 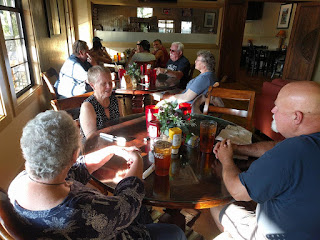 Supper at the Wildwood Grill 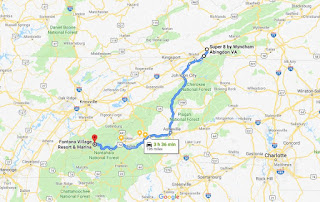