The final morning of the trip started under sunny blue skies. I got an Email from my car telling me it had a low tire. It was down to 16 PSI again, so I fired up the compressor and filled it back up. The pressure drop appeared to be time related and not dependent on whether or not we were driving. 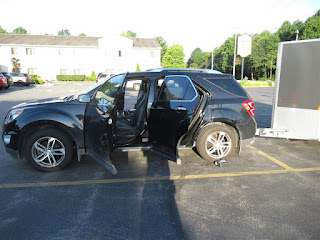 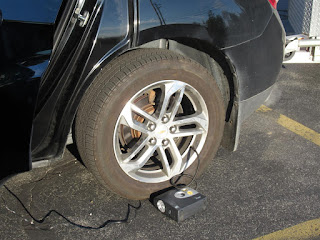 Sandy grabbed some yogurt from the motel breakfast room and then we stopped at the nearby McDonald's (odd entrance arrangement) before hitting the road just after 8:00 AM 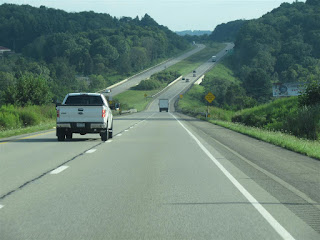 I-79 North in Pennsylvania

As we cruised along, first the car and then the phone chimed to warn us of possible flash floods in this area. We looked at the blue skies and scratched our heads. The warnings were in effect until 1:45 PM Eastern Time. 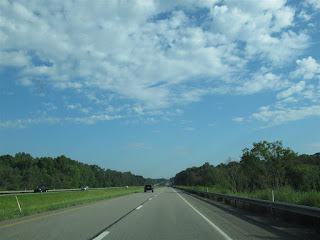 The new asphalt on I-79 had ripples in it despite its smooth appearance. This was, in my opinion, substandard work. Any imperfection in a finished surface will accelerate the wear due to traffic based on my experience with packed snow. The finished streets and highways these days remind me of home renovation contractors. Despite promises, they often don't really know how to achieve a quality result.

Reaching Erie, we transitioned to I-90 East and headed for New York. Just across the border, we paid the toll (the E-Pass transponder is a great device) and left the smooth free highway for the rough toll road. 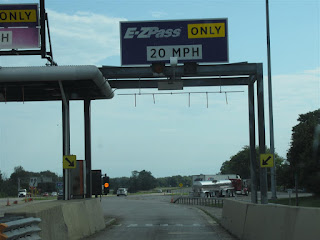 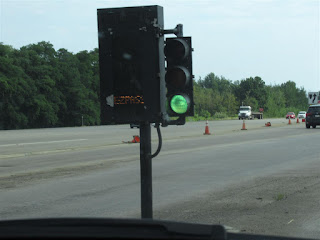 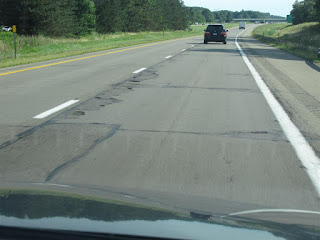 We pay for this?

There was one final stop at the Angola Service Center for coffee (strawberry banana smoothie for Sandy) and the last American fuel. Gas was about $0.60 per gallon more than Tennessee but still a lot cheaper than home. Then it was on to the border via more construction ones.

US bound traffic on the Peace Bridge took up two lanes and was backed up most of the way across the span. It looked like no one wanted to go to Canada this morning, which was just fine with us. 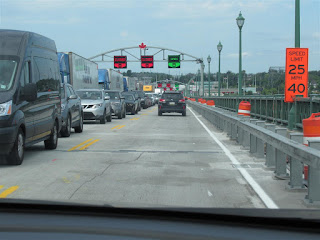 On the Canadian side, the electronic sign over the NEXUS lane was not illuminated and there were no vehicles visible. Not wanting to get into line for a closed booth, we went to one of the regular lines behind a couple of other cars. Once we were committed, we saw vehicles going through the NEXUS lane. Then I noticed there were three regular "Autos" signs lit but only two lines. The curved lanes made us miss the third booth which was just waiting for someone to approach. I told the young trainee about the NEXUS sign and she said she would notify her supervisor. No questions about purchases except whether we had any modifications done to the bike. Not this trip. At 11:30 AM, we were back on our native soil. 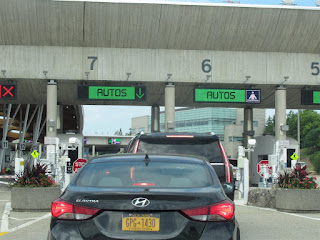 We should not be in this lane 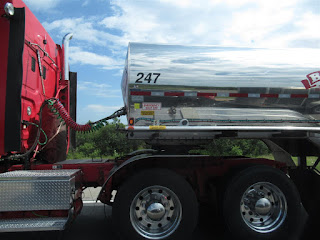 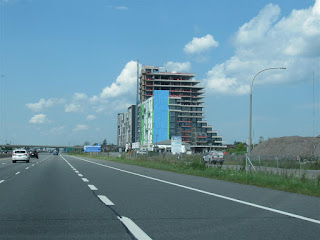 The new building at 50 Road 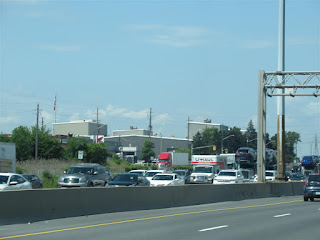 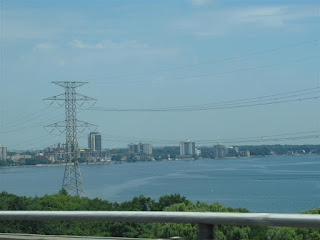 View from the Burlington Skyway 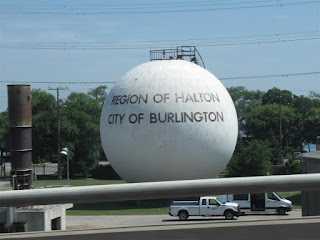 Faced with Toronto traffic, I opted to spend the dollars and take the ETR407 around the north side of the city. The tolls were outrageous but the convenience more than offset that this morning. 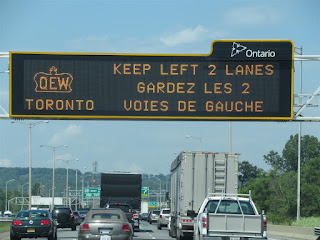 No, we will take the Express Toll Road 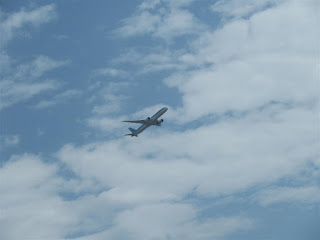 Soon we were on Highway 400 North. 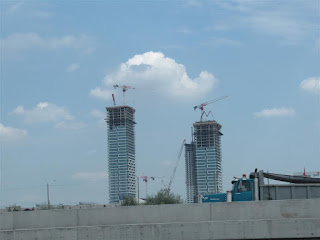 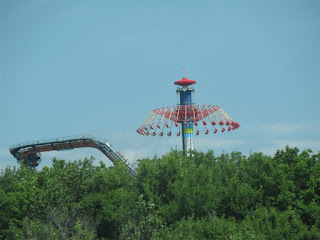 Canada's Wonderland was in full swing

We pulled into the King On Route service centre so Sandy could use the bathroom but there was no double parking space to be found. I dropped her off and then picked her up after driving around the lot. This was unusual for a Monday in my experience. We headed on the Barrie where there was a lot more room in the lot. 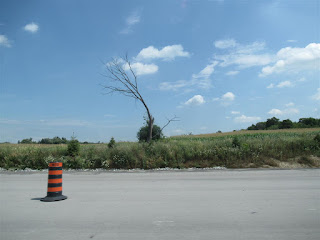 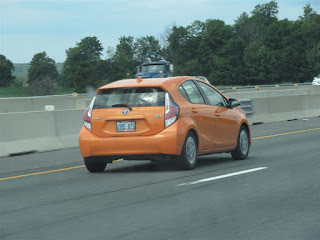 Suddenly, I want a Creamsicle...

At the southbound Moonstone exit, there were a number of fire vehicles and a police car stopped. It appeared that a pickup truck towing a trailer had burned on the off ramp. Due to the angles, Sandy was unable to get any photos.

The last gas stop was at Derek Roberts Esso in Waubaushene. Because of the way the pickup at the adjacent pump was parked (while the driver went inside), I had to climb over everything and out the passenger door. I was too old for that nonsense but we needed the fuel. Then we grabbed a ham & Swiss sandwich at the attached Subway before starting the final 150 miles.

Southbound traffic was pretty heavy. Our guess is that a lot of people in Cottage Country took Monday off to beat the Sunday rush.

There was one last stop at the new Tim's at the Magnetawan River where I used the outdoor facilities and got a final coffee. There was an older Caddie hearse there with two young ladies in it. They were heavily pierced and tatted, while the rear window told the world that this was the Bats In The Belfry Tour. I guess these were two of the bats. 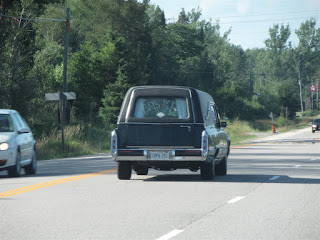 Young ladies on a mission 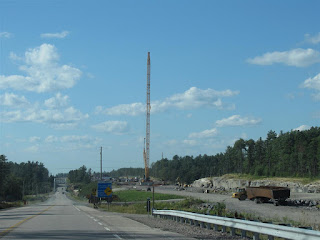 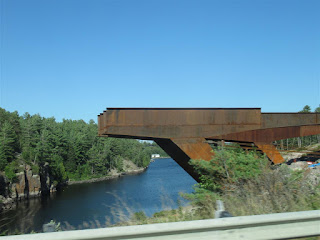 The construction zone at the French River was marked at 70 KPH. I was doing 90 and still had a long line build up behind me. Luckily, the four lane started just after this.

The temperature was 84 F in Sudbury as we arrived home just after 6:00 PM. Unloading would have gone more smoothly if I had not left the bike key in the Accessory position when I got the mileage after fueling it in Erwin, Tennessee. The booster pack got it going and then I left it on the smart charger.

Unloading was complete by 6:30 PM.

It was a good trip. I didn't get as much riding done as I wanted because I let the flat tire distract me, but it was good to see folks again. We'll see some of them again in Arkansas next month.

I need to thank Zeke for putting us onto audio books. Some folks are music oriented while others prefer words. I am of the latter persuasion. We listened to The Woman Who Smashed Codes, the true story of Elizebeth Smith Friedman and her husband William. They were key players in cryptography from World War I through the Cold War and contributed to the founding of the NSA. Ms. Friedman did her work before and during WW II for the US Coast Guard. Some of her key work was co-opted by J. Edgar Hoover and presented falsely as FBI analyses. When that story was done, we listened to The End of Eternity by Isaac Asimov (although Sandy was not as interested as I was in this 1955 time travel tale). 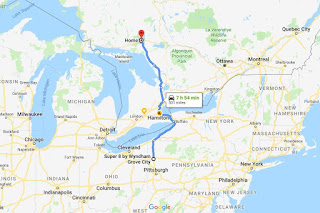