All things, even the good ones, must pass. The alarm sounded at 6:00 AM, with the second one coming five minutes later. We rolled out of bed and quickly packed the remaining overnight bags. The car tire was only down to 20 PSI so it didn't take too long for the compressor to bump that up to the recommended 35 pounds (cold).

We drove around to the office in the main lodge and checked out. The desk lady said Big Grouch had beaten us to the road, telling her he was worried about crossing the border with all the knives he and Bill won last night. 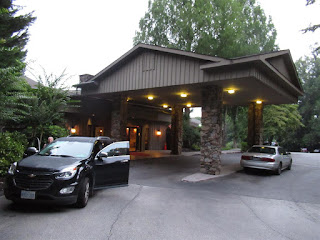 Checking out of the Fontana Village Resort

The next stop was the trailer parking lot down by the General Store, where we connected the already loaded trailer. We rolled out onto Highway 28 at 7:01 AM. There was a light fog in some places as we made it all the way to US 74/19 without a single vehicle catching up to us. In fact, we only saw one car going the other way. 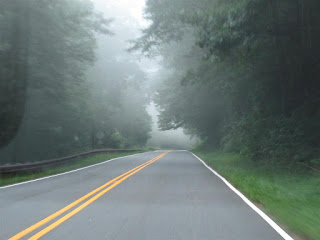 A quiet morning on NC 28 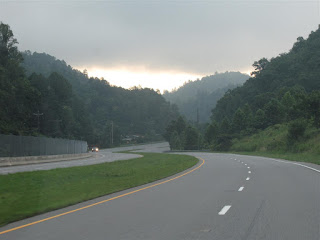 We stopped at McDonald's in Bryson City where I cheated and had a couple of sausage McMuffins with no egg. The tire pressure was holding well, so we continued on. The route was the same as always; US 74 to I-40 to I-240 to I-26. 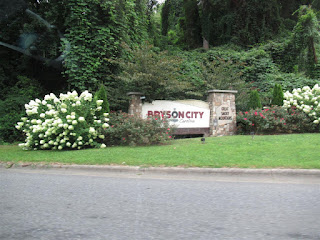 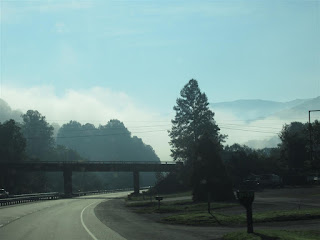 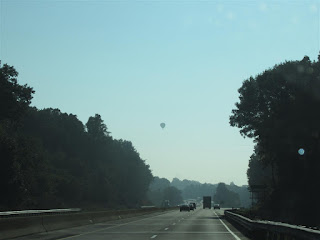 It was time for fuel by the time we got to Erwin, Tennessee (south of Johnson City). The tire pressure had dropped a few pounds so I topped it up. I also put $2.35 gas in the bike in the trailer. Then we continued to Johnson City. From there, it was US 19W through Piney Flats to TN 394 (Tennessee Ernie Ford Parkway) to US 421, TN 44 and VA 75, joining I-81 in Abingdon. We know these roads like the back of our respective hands. 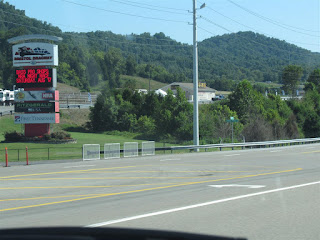 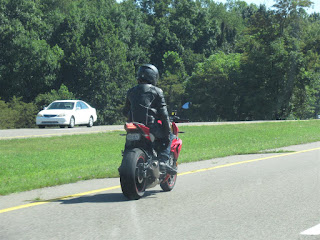 Rider heading for The Snake 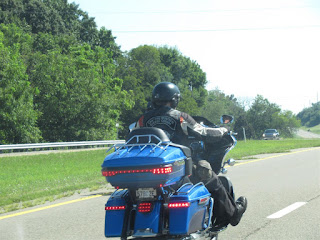 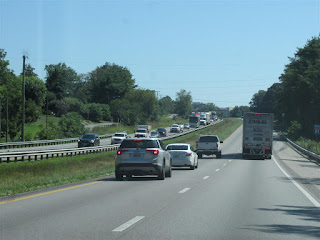 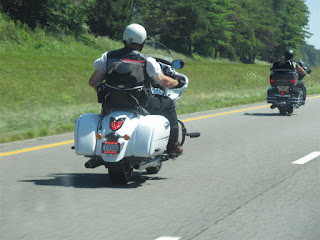 Toj and Bub Z passed us near Wytheville Virginia 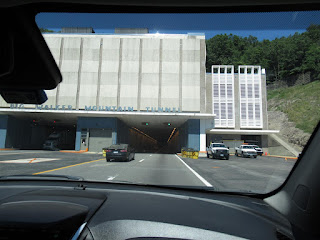 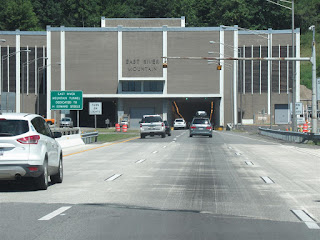 The Gateway to West (By God) Virginia 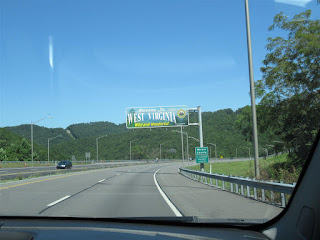 Approaching Beckley, West Virginia, poor signage in a construction zone resulted in us accidentally leaving the Interstate and driving through town. We stopped at the McDonald's at Exit 44 before getting back on the super slab. After trying to merge with flowing traffic from a dead stop, I concluded that we should have stayed on US 19 all the way out of town. There was still roadwork everywhere. 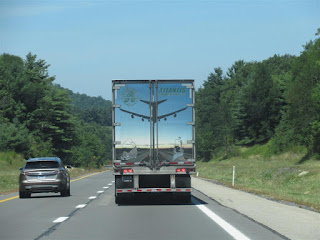 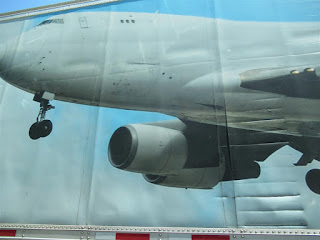 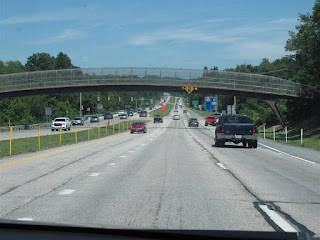 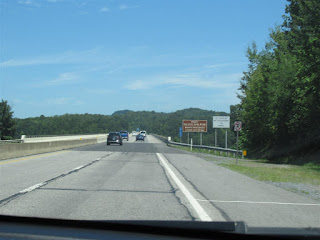 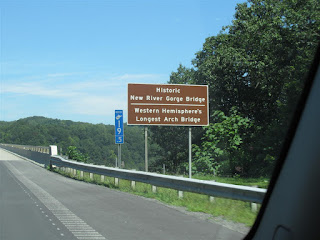 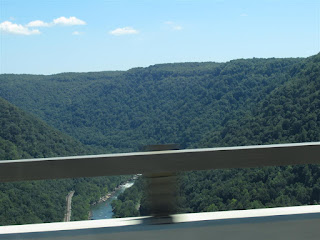 After getting on to I-79 I was feeling tired again, so we pulled into a gas station near Sutton, WV. I got out and walked around and also went on line and booked a room at the Super 8 in Grove City where we stayed on the way down. Oh yes, I added some air to the tire. 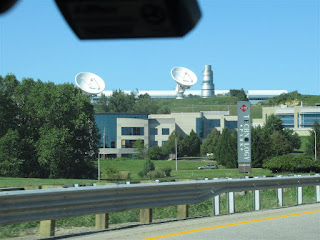 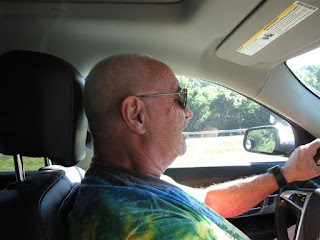 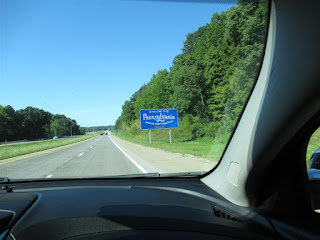 Fourth state line of the day 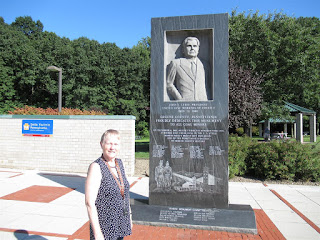 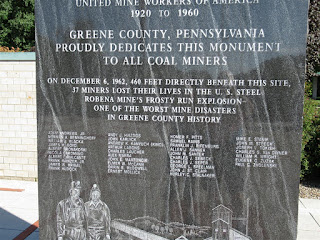 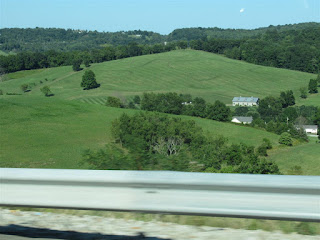 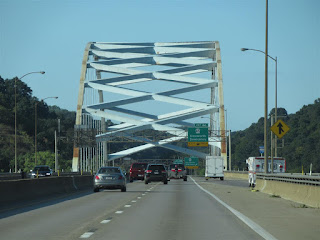 North of Pittsburgh, I used the GPS to pick a Speedway gas station near an off ramp for fuel. We exited and found the entire intersection had been rearranged. Luckily, we did find the Speedway on the other side of the Interstate hidden by trees. It had the oddest signs on the parking spaces in front of the store. No SUV's? Did that include the Equinox? 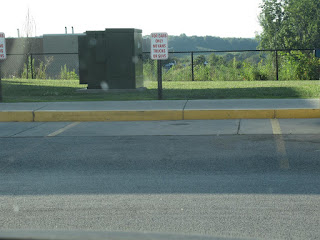 We arrived at the Grove City Super 8 around 7:30 PM after a stop at the Subway to pick up supper. I spent the evening sorting out a week's worth of bills and sorted the photos but did not get this post finished. 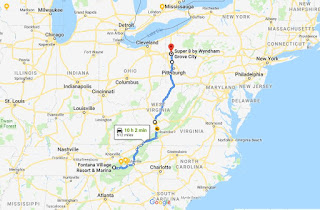