We were up at 7:30 AM. We had breakfast and then I worked on photos and blogs from yesterday while the golf cart that came with our rental was charging. Golf carts were everywhere here. Some were quite fancy but ours was just a normal cart with two extra seats where the golf clubs would usually go. 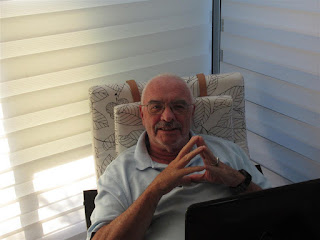 A blogger's job is never done

One of the big features of Sherkston Shores Resort was the Funplex. This facility had pools, a splash pad, hot tubs, three large water slides, an arcade, mini-putt and (for an extra fee) some adventure activities. With a freshly charged golf cart, we drove up to the Welcome Centre to get our discounted day passes and then went to the Funplex for a round of mini-putt. 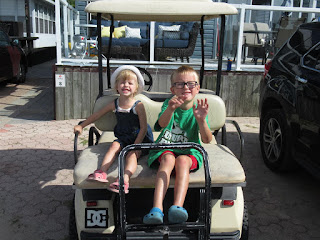 Waiting for the golf cart to charge 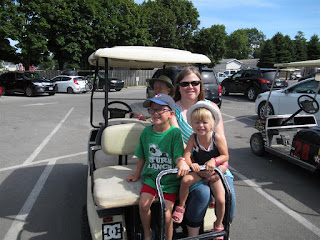 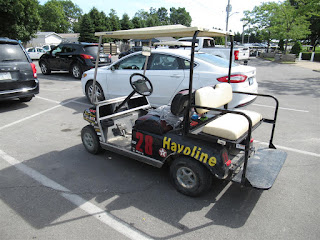 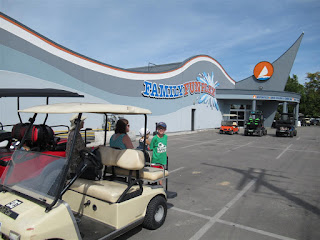 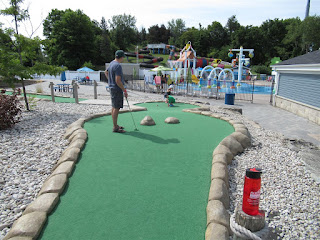 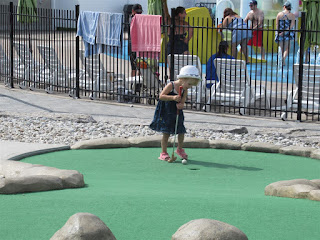 After golf was done, we returned to the cottage for lunch and then Sandy and I went to Walmart in Welland for a few items. There was a large man made hill behind the Walmart so I asked our checker about it and she said she didn't know. A quick Google search revealed that it was a land fill operation jokingly called Mount Welland and was nearly complete.

The kids liked the pools and splash pad. Then Heather took Jasper to ride one of the water slides. Riders have the option of solo or double tubes to slide in. They chose the fastest one and, afterwards, Jasper claimed he had actually had two rides on that slide. His first and his last. Heather and I also tried it on a two-person tube. This was not just a slide, water flowed down and the tube moved along quickly. One large drop and we found ourselves circling a bowl. After five or so revolutions, the tube switched end for end and we descended the rest of the way backwards. Great slide. My only beef was the long walk up at the beginning carrying the tube. Jasper then went on one of the slower slides with Heather.

We returned to the cottage for supper and then a fire with more S'Mores. The sunset was hidden by clouds this evening.
Posted by Jim "Skid" Robinson on 8/26/2019