Today is the 10th anniversary of the day I retired from INCO. It is also April Fool's Day. We received word from Sherm that Wrong Turn and KT made it back to Yuma about midnight last night. That was a long day. Glad to hear they're safely home.

We were rolling by 8:00 AM, climbing 1,900 feet back up I-10 East through Texas Canyon to the pass and then down into the Sulphur Springs Valley (again). We stopped at a Truckstop of America in Willcox to take on fuel and then continued east. 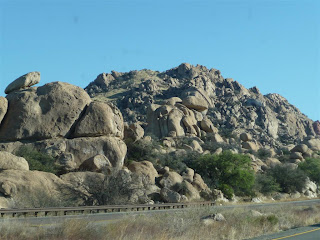 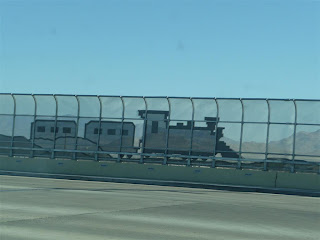 Artwork on an overpass in Willcox Arizona 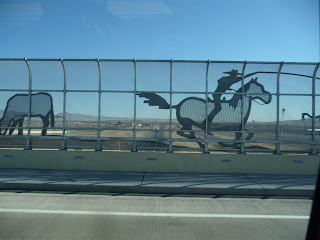 More overpass artwork
The road is pretty empty out here. Rock formations jut out of the desert and signs said that dust storms were possible, as was zero visibility. It warned that drivers should not stop on the traveled portion of the highway should this occur. Somewhere along the way, we crossed into New Mexico and moved back to Mountain Time. 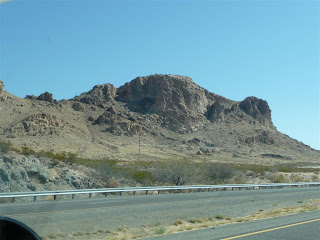 Rock formations along I-10 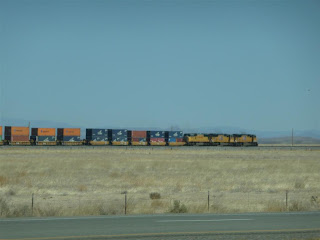 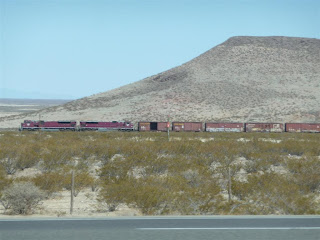 I have no idea what this train was but it was hauling old empty boxcars
We stopped in Lordsburg, New Mexico. This appeared to be a railroad town where most of the businesses were closed down but it also had three truck stops. A Love's, a Pilot and a Flying J. They were all very small truck stops with little parking space and my attempt to get into the Pilot was thwarted by a number of buses transporting soldiers. They needed the stop more than we did so we went back to a nice little Visitor Center, used their WiFi and had complimentary coffee. 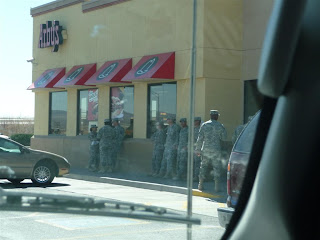 Soldiers taking a break at the Pilot truck stop 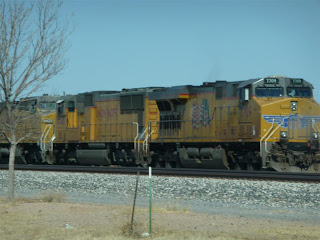 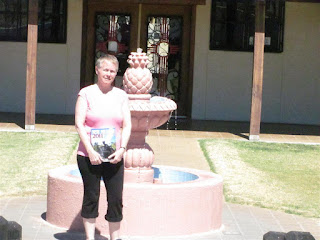 The Lordsburg Visitor Center
We continued on and crossed the Continental Divide at 4,585 feet amidst a vast expanse of flat land. It became apparent that, in addition to being a land of desert and mountains, this was also a land of many billboards. 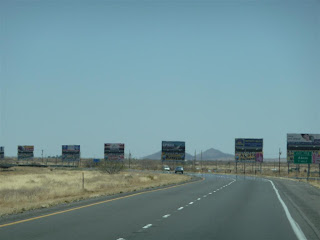 Billboards along I-10
Eventually, the distinctive Organ Mountains came into view indicating that we were approaching Las Cruces. I had phoned and reserved a pull through site at the KOA there. Staying at KOA's is eating into our budget but they are nice and predictable and I am lazy. The facilities run from good to excellent. 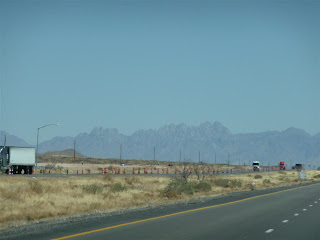 The Organ Mountains above Las Cruces New Mexico
Before stopping at the KOA, we went into town and stopped at a WalMart to get some provisions. While packing things away, there was a knock on our door. It was the security guard wondering if we were going to be staying overnight. He said we were welcome to and he had a good parking spot for us. We thanked him but told him we were just shopping.

Back up on a ridge overlooking the Rio Grande Valley and the city, we got located and set up in our site. The pull-through sites here were close and narrow but they were well maintained and we were close to the washroom/showers. The sites are a fine stone and they rake them between guests for a pretty appearance. After supper, the sunset cast interesting light back on the Organ Mountains to the east of us. The view was breathtaking. 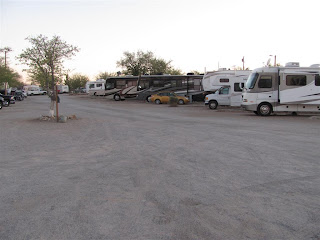 Our site at the Las Cruces KOA 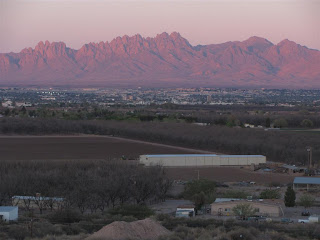 Sunset lights up the Organ Mountains 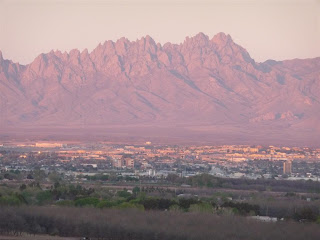 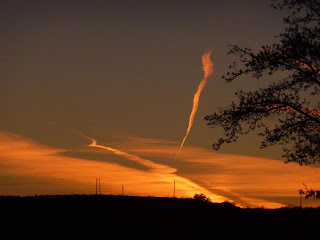 The sun has gone down
While we were looking at the mountains, we met Bernie and Susan from just south of Winnipeg. They have a 5th wheel outfit and Bernie is retired from Manitoba Hydro (the power company, for you southerners). Sue also retired after a career working in a medical lab. They had just spent three months in Mesa in an RV park near Silveridge. We found we were all going on to Carlsbad, although by different routes, so we said we'd see each other again tomorrow night.

I did get three blog days caught up before turning in.

Beautiful view of the Organ Mountains at sunset!