I woke up at 4:00 AM thinking about the trip north, whether I would have to winterize the water system and holding tanks due to freezing temperatures and just how I would do that. Unable to get back to sleep, I checked out the Internet but the official KOA WiFi system was throttled back so much I was unable to do anything useful. Then I went back to bed and caught a little more shut-eye.

Back up about dawn, I disconnected the utilities. We would be here another night but the motorhome was off to Camping World for an oil change and to get the backup camera monitor sorted out. We left shortly after 7:30 and were at the Camping World location, which straddles the state line between Georgia and Tennessee by 8:00. I unhooked the trailer and we went inside to find Eric. We learned that Eric had moved over to the service facility and Johnny, first day on the job, was replacing him.

Johnny prepared a work order to change the oil and filter, check out the problem with the monitor losing all contrast in bright sunlight and install a T-fitting to allow anti-freeze to be introduced to the water system for winterizing. He also asked the shop to take another look at installing a second house battery. He took the keys and we went off to the sales/waiting area. Soon, the shop got back to Johnny and said installation of a second battery was feasible so I told them to go ahead and do it.

After getting blogs caught up and talking to a few people, we went shopping in the store. I had a list of things we needed and then we got some more things that caught our eye. Soon, the shopping cart was full. This place is like WalMart for RV owners.

It was deja vu all over again as we waited for the motorhome to be ready and watched the weather roll in from the west. This was a huge system that started in the Gulf of Mexico and extended up through the south-eastern states with a thin, violent line of storms. It then curled up and around to the Dakotas, where the warm Gulf moisture met the cold air and was causing unseasonable snow. Before the RV was done at 3:00 PM, the rain heavily upon us along with thunder and lightning.

Johnny said the backup monitor problem was due to an incorrect angle of the camera. I told him that wasn't likely because I had tried a number of different angles. Unfortunately, the day was overcast and they weren't able to test it under the circumstances that caused the problem. My belief is that the lack of a contrast or day/night selection on this small monitor is where the problem lies. I had showed him photos of the poor pictures when we got there and said that if the problem persisted after the adjustment, I would send him more. We can take it to the CW in Knoxville on the Maggie Valley trip if the issue isn't resolved. What the fix might be is still unresolved. 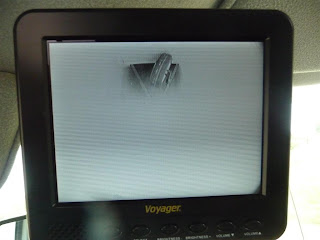 Backup monitor view in bright sunlight
I asked Johnny to have the driver back the RV up to the trailer when they brought it back. He did, leaving it about one inch short of the hitch. I went out wearing one of those $1.00 ponchos made out of the same kind of plastic dry cleaners use to cover clean clothes. I almost suffocated myself getting into it. It didn't take much to get hooked up but, with the heavy rain pouring down, I got pretty wet. Then I brought the unit around by the door and we loaded our purchases. 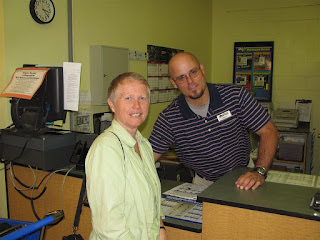 Johnny at Camping World - Chattanooga Tennessee
The drive back to the KOA was interesting. We got on I-75 South in a driving downpour and moved along at about 40 MPH with four-way flashers on. The semis were doing about the same speed. At the campground, I put on my bathing suit under the plastic poncho along with Crocs and went out in the deluge to reconnect the utilities.

The rain eased before TJ and Jean showed up at the front gate at 6:30 to take us to supper once again. The restaurant was The Acropolis and I really don't know where it was because we turned a lot of corners. The lot was quite full when we got there but Tony found a spot. Soon after, Crystal showed up and we were soon shown to our table. Curtis skipped out of work and joined us just as we were ordering. It was another fine meal with excellent company. If I was Sherm, I would have gotten photos of the food, the people, the server and the restaurant. Unfortunately, I am not he and the camera stayed in the case. Tony did an end run on me for the bill saying that I could buy when they got to Canada. Thank you again, Tony and Jean.

By the time we got done, the rain had picked up again and lightning was flashing in the sky. The drive back to the campground was challenging with limited visibility and heavy traffic. They dropped us off right at the RV and we got inside quickly. Before we turned in, the 110 power went out a couple of times but came on again within minutes. I'm not sure if the grid went down or our surge protector tripped.

We watched the news of deadly storms across Mississippi and Alabama, the very area we came across yesterday. It was a good thing we weren't a day later. One side window by the dinette leaked a little at the bottom. This will bear looking into when we get home.

About the weather. While we were out west, we watched severe storm lines cross the east repeatedly and, now that we were here, they continued. I miss getting up in the morning to endless blue sky and warm temperatures. Until today, we hadn't seen rain since we were last in Tennessee five weeks ago and I am really beginning to think that the east sucks from a climate standpoint.