Rain pounded down on the roof most of the night. In the early morning, we woke to silence but then it started again. I got up and checked the weather radar to find a small straggling line was passing over us. Then I went back to bed and woke up in the morning to find the rain had passed and we were facing a decidedly cool and windy day.

The news told us the storm line had taken at least 13 lives, mostly in Mississippi and Alabama. Again, we reflected on the luck of our timing. I really don't want to go north either. It was -6C in Sudbury overnight and will stay cold until after we get back. However, after talking to people at Camping World yesterday, I have decided not to winterize. While below freezing, the overnight temperatures will not be severe and we can leave the furnace or ceramic heater on. The daytime temperatures will pose no problem and, by the 22nd, the freezing worries should be over.

With all the clothes out drying and the high humidity, we had a lot of condensation on the inside of the RV. After we left at 8:15, with all the roof vents open, this cleared up quickly. Rather than head straight north on I-75, we went for a quest for Boo Berry cereal. The General Mills website said that the only store that had it within a 50 mile radius was a WalMart in Lookout Valley. We drove across I-24 and checked it out. The website was wrong, but I bought a file and a bundle of new socks.

This WalMart was interesting because it sat at a nexus of sorts. From the parking lot, the distance to Sault Ste. Marie via Nashville and via Knoxville was within three miles and the estimated travel time was within three minutes. I decided we should do something different and take the Nashville route, so we headed west on I-24. The folly of my choice was soon apparent as we were buffeted by severe crosswinds that would have been tailwinds had we gone the other way. To top it off, the sky ahead of us was getting angry and black. Not being one to always stick to my guns, we turned around short of the climb to Monteagle and headed back the other way.

On the way back to Chattanooga, we encountered a traffic delay as I-24 was reduced to one lane in preparation for recovery crews righting a flipped semi trailer in the median. The merging lane was moving faster, as usual, as left lane vehicles merged early and others surged past them.  This stopped when a car and then a Swift truck moved to the left and executed a rolling road block. They stay in the merging lane but move at the speed of the other lane so that no cars can slip by and get ahead. The delay wasn't excessive and soon we were moving east again. 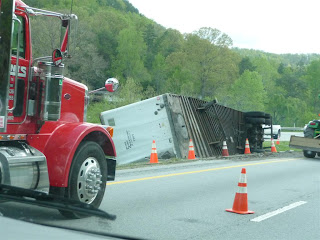 Flipped trailer along I-24
Just after 11:00 PM, we got back to I-75 and headed north with a tailwind in steady traffic. At one point, I looked in the rear view mirror and saw a low yellow car moving up on us. When it went by, I saw it was a Lamborghini. Strangely enough, it was moving at the 70 MPH speed limit. 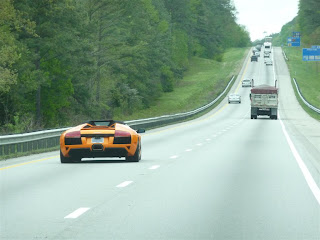 Lamborghini on I-75 in Tennessee
Through central Tennessee, we found a large number of religious radio stations. Listening in for a while, we approached Knoxville where two of the busiest highways in the USA, I-75 and I-40, run together for about 18 miles. Before we got to downtown Knoxville, we cut north on I-640 which by-passed the city proper. I don't remember this from past drives down I-75, but I like it. Once we turned due north, the winds shifted to coming across from our left and got to be a little unpleasant.

Crossing over some mountains, we passed many trees with pink blossoms on them. Descending to Jellicoe, we stopped at a Kentucky Welcome Center that offered us free WiFi for 15 minutes. If we needed longer, it would cost us. I checked the weather and got hope that there would be less wind tomorrow. Then I went inside and asked about the pink blossoms. A lady told me they were redbud. Outside, I spoke to a couple in an older Southwind Class A and found they were going home to Thunder Bay, Ontario. They had been in Biloxi, Mississippi for a couple of months but had also gotten as far west as Yuma. Sandy noted that a huge diesel pusher Prevost coach which pulled in next to us for a moment was being driven by a little white haired lady dressed in her Sunday best. She looked like Mother Goose but handled the big rig like a pro. 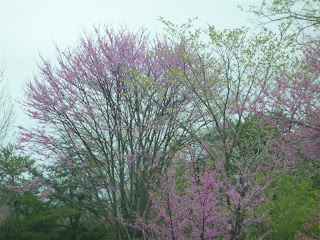 Redbud trees along I-75 in northern Tennessee 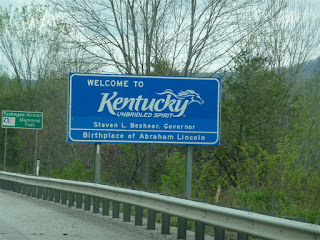 Welcome to Kentucky
Leaving the rest area, the rain started and the crosswinds picked up. It was about an hour to the Renfro Valley KOA near Mt. Vernon, just up the road from the Kentucky Music Hall of Fame. The entrance road to the campground was narrow and almost straight up but signs assured us it was a one way street. At the top, I registered and a pretty young lady escorted us to our spot. It was cold, wet and windy and everyone was wearing jackets with hoods while I was still in my shorts. I got hooked up and, not long after, the Southwind from Thunder Bay pulled in. They had emigrated to Canada in 1969 after he served with the US Marines and then he had a career as a bush pilot. Interesting folks.

We talked to Jolene and father-in-law Harry on Skype and then had a supper of frozen dinners while watching TV. It seems the storms that followed us through Mississippi and Alabama and brought the rain to Chattanooga descended again into eastern North Carolina with a vengeance and the destruction and death toll were severe. After supper, we watched a movie and then went to bed listening to rain on the roof at a balmy 39F.