This morning was overcast again and we listened to more news of the impending government shutdown. If they don't come to an agreement, this will be the last day the US Government is fully operational. I feel sorry for Dieter and Ursula from Germany and their month long plan of visiting National Parks if the situation isn't resolved.

Since we are rolling out tomorrow for Louisiana, I did some motorhome chores this morning. I checked all the tire pressures and compared the gauge with the monitor readings. Everything seemed good although all the tire pressures were up equally. This was probably due to the additional 1,000 feet in elevation from the last time I checked them in Yuma. I emptied the holding tanks, which seem to be good for more than a week with just the two of us using them. Then I checked the tire tread depths and found nothing to be alarmed about. I know I'm a little bit anal about this stuff but now I can relax and just drive the thing. I also called Eric at Camping World in Chattanooga and booked an oil and filter change for a week from today. They will also check out the backup camera while we're there.

The agenda today called for a visit to the National Museum of the Pacific War, just a few miles away in downtown Fredericksburg. It was near the Super 8 we stayed at in 2004 and 2005 but we were so busy riding, eating and partying back then that we never got around to visiting it.

Chester W, Nimitz was the Commander in Chief, United States Pacific Fleet during WW II. He came from Fredericksburg, where his family had owned and operated the Nimitz Hotel for many years. The hotel was restored and a museum featuring the life of this great commander was housed within it. Then it grew. While the museum inside the hotel still features exhibits related to the history of the hotel and the life and career of Chester Nimitz, the venue has expanded and taken over most of a city block. Behind the hotel and the store fronts, there are gardens and memorials as well as the George H.W. Bush gallery. This building sends you through a maze that explores the circumstances leading up to the war in the Pacific (starting with the fall of the Chinese Ming Dynasty hundreds of years ago) as well as the prosecution of the war. It has 36 segments. We made it through 11. More for later. On the plus side, for those in the area for a few days, the tickets are good for 48 hours.

What impressed me most about the museum was the quality and comprehensiveness of the exhibits. The presentation was far and away better than I expected. After realizing it was lunch time about the time we got to the Guadalcanal campaign, we took an exit and headed down the street for lunch. After walking by a few places, we came to Winslow's where there was no wait and they had a quiche lunch offering that caught Sandy's eye. I had some turkey on a croissant. 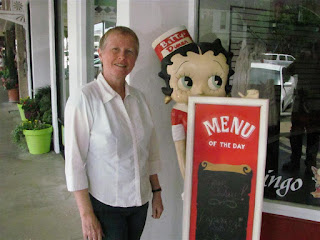 Sandy and Betty (photo for Cheryl)
As we were finishing, I realized that we would have to hustle if we were going to make the next guided tour of the third part of the museum, the Pacific Combat Zone. We managed to get there before the 1:00 PM start time. The guide took us through several scenes including a carrier hanger deck with a TBM Avenger, a dock with a restored PT boat, an outdoor Pacific beachhead and a quonset hut set up as a battalion aid station. It was quite well done and they periodically do re-enactments on the beachhead. 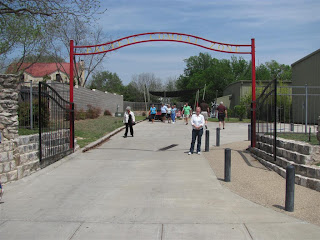 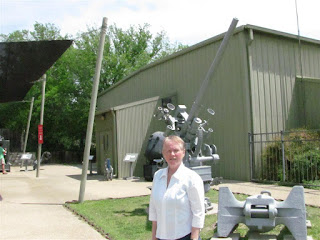 Anti-aircraft gun
One odd thing as we were moving from the Nimitz building to the Bush Gallery was that a B-24 Liberator flew overhead. Then, as we were waiting at the Pacific Combat Zone, a B-17 was spotted overhead. I heard the B-17 was coming to a nearby airport and that they would be offering rides. For $400 per head.

We decided the rest of the Bush Gallery would have to wait for another time and, in the heat of a now clear afternoon, returned to the motorhome. I plotted routes and we watched trailers, 5th wheels and motorhomes arriving for the rest of the afternoon. This is one busy campground this weekend.  Linda and Tony-Joe, from near Odessa, pulled their trailer in across from us and we got to know each other a bit. Linda has a small Honda step-through scooter we unloaded and then I loaded the Wing in our trailer.

Sandy and I did walk over to check out the two Texas longhorns the owner keeps in a pen. These are registered pure-bred cattle. Longhorns. Skinny cows with scary looking horns. They were feeding them and, despite claims they were gentle, no one turned their back on them. Then we walked to the back of the property where the neighbor has a pair of ring-tailed lemurs in a large cage.  We spoke to a man from near Fort Worth who is down this weekend to compete in a Western Fast Draw competition. 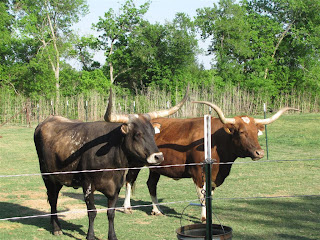 Texas longhorns
The rest of the evening was laid back as we prepared to head out tomorrow morning for Coushatta, Louisiana to see Thomas aka Wiliedog.
Posted by Jim "Skid" Robinson on 4/08/2011

Skid will you be coming through Houston?

No, Joe. Houston wasn't on the route for this trip. We're up in Coushatta, Louisiana now.