It was one month ago today that we left home. And our legs still hurt this morning. I called the KOA in Fredericksburg yesterday evening and left a voice mail but have still gotten no response. 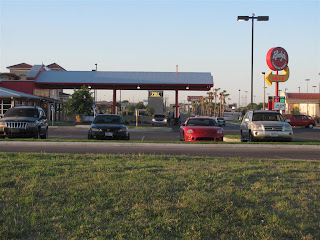 Rudy's Texas BBQ from last night
We headed north out of Del Rio on US 377. Of course, the first thing we encountered was a Border Patrol checkpoint. Then we didn't encounter much else for the next 120 miles. No cars and no cell service but lots of warnings about not crossing streams during a flood. The low spots have Flood Gauges, sticks that show how deep water over the road would be. And there were the usual buzzard gatherings over roadkill, mostly dead deer.

North of Rocksprings, we saw some some hunting ranches with exotic animals advertised. Behind one tall fence, I saw something that resembled a gnu. Sort of like our African Lion Safari back home except that the visitors get to shoot the wildlife. 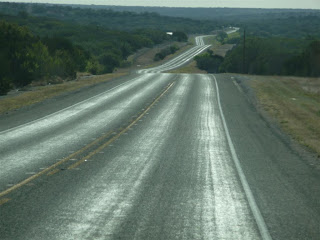 US 377 in Texas
At Mountain Home, we joined I-10 and proceeded towards Kerrville. I stopped at a Scenic Overlook so Sandy could get a picture of the countryside. What is the point of having a scenic overlook if they let the trees grow up to block the view? 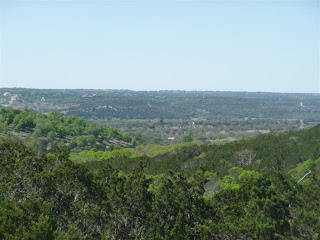 Scenic view from the elevated motorhome window
What can I say about Kerrville? It was an experience. I wanted to stop at McDonald's and check my Email to see if there was any response from the KOA. I got off at Exit 508 and found nowhere I could park. I went through the Shell lot, adjacent to McDonald's, and scraped my trailer hitch coming out. Then I was pointed the wrong way to go to Fredericksburg so I tried to go around a block. Turned out to be a big block, up Memorial Parkway and down Cypress Creek Road. This is when the GPS turned on me and suggested I could get back via Quinlan Creek Drive and Paragon Place. The problem here was that Paragon Place turned out to be a dead end and I was left to turn around in a cul-de-sac smaller than the one at TJ's. It took about eight moves, almost jackknifing the trailer each time, to get turned. But I did it.

The short hop from there to Fredericksburg was uneventful but the road was suddenly busy and they were in a hurry. We were moving 65 MPH and the cars were lining up behind us. Reaching town, we found it crowded with people. We proceeded to the KOA where one guy seemed to be running it all and saw we were next on the list to be phoned. Other KOA's have been half full at best but this one was packed. They managed to find a site that was good through Saturday, but we had to stuff 45 feet into a 42 foot spot. 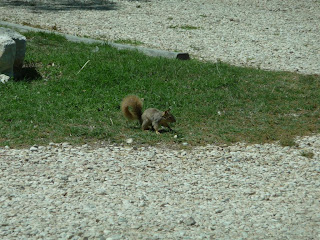 Oh look, a squirrel
We set up and had a brief problem with the WiFi, but that fixed itself. Then I unloaded the bike. I met Randy and Carol from northern Louisiana. They tow a trailer with a Harley and a BMW sports car behind their diesel pusher.

We took the bike and rode five miles down Ranch Road 1376 to Luckenbach, the place made famous by the song. Waylon, Willie and the boys weren't there and neither was pretty much anyone else. Counting us, there were seven bikes. We sat at the tables and talked to some good old Texas boys (and girls) about riding and the weather. 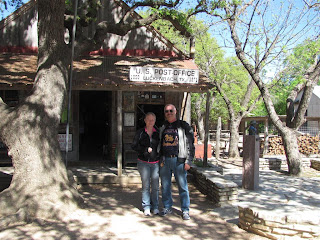 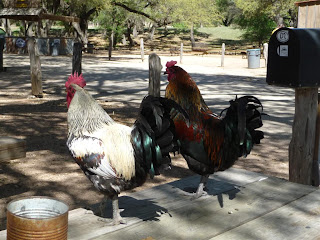 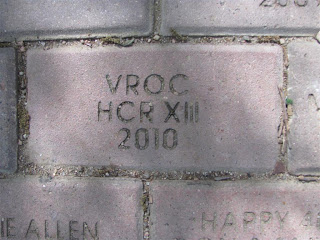 The last VROC Hill Country brick at Luckenbach
Leaving Luckenbach, we headed into Fredericksburg for Blizzards at the Dairy Queen. Unlike at home, here they make a Blizzard that stays in the cup when you turn it over. Even after you are half finished. At home, they are sloppy when you first get them and if you turned the cup upside down, you would be mopping up the floor.

Back at the campground, I talked to a few other residents including a man from PEI (originally a Mainer) who spent the entire winter here with his wife and rode a 1990 BMW. Another older gentleman from Iowa had a Can-Am Spyder. Seems like there are lots of riders here. Later, Garth from Wyoming pulled in driving a pretty 27' Jayco. He hates Jayco (unresolved customer service issues).

I got a bit more of the blog done but this getting caught up is eluding me. Then we turned in.