We got up to a sunny day with no clouds but it was cold. The first long pants day since we left Sudbury. I talked to the Thunder Bay natives for a while and then disconnected. We were rolling by 8:15 AM. 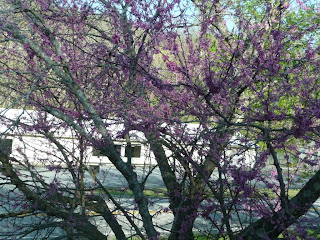 Sandy likes taking pictures of redbud (should be pinkbud)
Shortly after 9:00 AM, we passed the exit for Richmond, Kentucky where the Best Western was located. This was the spot two years ago where the Wolfman's Wandering Rally was held and it holds good memories for us. On the north side of Richmond, we stopped at a Love's Truck Stop for fuel. 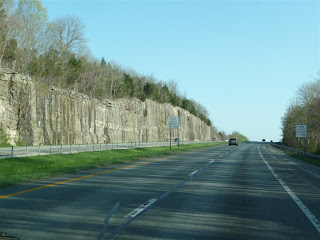 Typical Kentucky sedimentary rocks
The winds were quartering from the left rear this morning, but sharp gusts were occasionally catching us from the side. They used to say that Dale Earnhardt could see the wind on the superspeedways. I wish I had the same knack because maybe the gusts wouldn't take me by surprise.

As we proceeded north, we saw many Florida plates running the same direction we were. I'm not sure of the significance of this at this time of year, but we knew where the large number of Ontario licences were going. We were also passed by two ARCA Racing Series trailers heading back from Talladega. Their race was early in the weekend while the Sprint Cup race would be this afternoon. 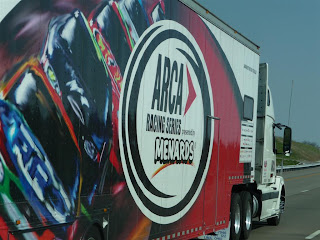 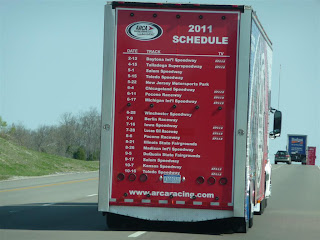 The ARCA schedule
TJ told me that the enemy of any highway was water getting under the pavement. He said that if you put the right drainage layer underneath, a road should last forever. I guess that the people in northern climes didn't get the message because there were stretches here that were uncomfortable and we knew Michigan would be worse. I once saw a TV show on constructing the Autobahn in Germany. Their base is almost twice the depth of a North American freeway. I guess it is easier to build a road here on a reduced budget and let those who come after worry about it.

I considered taking the by-pass around Cincinnati but realized it was Sunday (retired folk often have trouble knowing what day it is) and decided to go through the middle of the city on I-75. Before we reached the Ohio line, we passed the famous Florence Y'all water tower, which had guys working on top of it. We stopped at the Flying J in Crittenden, Kentucky and got the propane tank topped off so we would have fuel to run the furnace when the temperature got below freezing at home. Gas price here was $3.899. Then we started down the long Covington Hill and across the Ohio River into the Buckeye State. 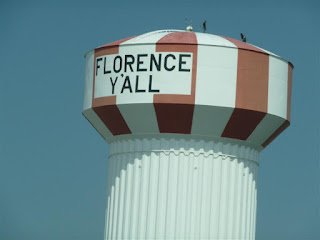 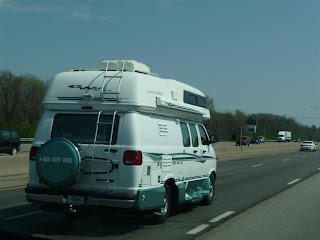 This is an old Class B motorhome 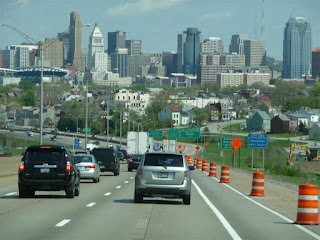 Covington Hill with Cincinnati in the background
We made it through Cincinnati without problems. The highway out was posted at 55 MPH but I was doing 65 and getting passed by everyone. An overhead sign warned about a traffic accident at Exit 16 that was causing traffic problems but that exit came and went without us seeing anything. Up until now, these signs have been saying "Drive Smart - Watch For Motorcycles", a sentiment we share. The crosswinds picked up and got downright nasty in Ohio, threatening on occasion to tear the steering wheel out of my hands. 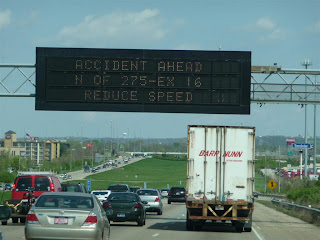 Warning about non-existent accident on I-75 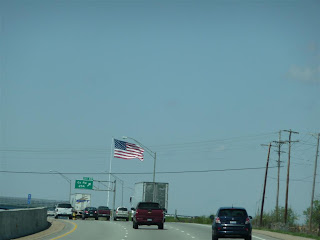 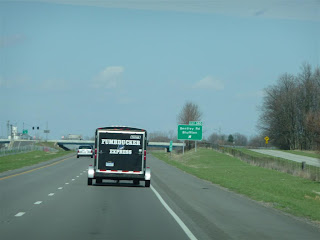 Interesting name
I managed to find the NASCAR race on MRN radio and listened to the the cars circle the fast track at Talladega, Alabaama while wishing I could be watching. We stopped at an Ohio Rest Area for lunch and I called a KOA just over the Michigan state line. I got the call center and the lady told me they didn't have any sites over 40 feet. I had never encountered this before and called one a bit further south in Van Buren, Ohio, just north of Findlay. They had room so I booked a site. I also finished my list of goods for Canadian Customs. All this while the stationary RV was rocking back and forth in the wind. 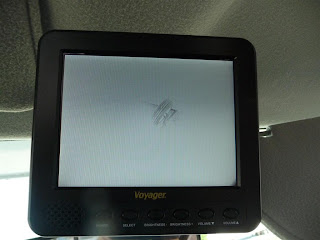 Note that the "camera angle according to specifications" hasn't helped the rear view monitor at all
We finished the drive to the KOA without incident and were directed to our spot. This KOA had a large number of seasonal sites. Next to us in the transient area was a diesel pusher piloted by a retired cop from Timmins who complained that his arms were sore from fighting the wind. Tell me about it.

My shock of the day came as soon as I started hooking up. My first step was usually to get the surge protector and plug it into the campground 30 Amp outlet. But when I looked in the basement, the surge protector was missing. Now this isn't just any surge protector. It is a large unit that is so sophisticated it takes over two minutes to analyze a power feed before allowing any juice through. With all the circuits on a motorhome, especially expensive ones like the refrigerator, you can't be too careful (although Sherm laughs at me). I paid almost $250 for it. But I remembered changing my routine when I disconnected this morning and, instead of pulling the protector first and putting it in the compartment, I pulled the power cord and stowed it. Bad move. I called the Renfro Valley KOA and said they would look for it.

Since we planned to run all the way to Sudbury tomorrow, over 600 miles, and knew the night temperatures were still below freezing, I dumped the holding tanks and conditioned them each with 1/2 gallon of RV anti-freeze. I also did a full tire check. After the wind died down, I cranked up the TV antenna (no cable TV here) and, while the campground manager suggested we might get six stations, we actually got 14. Maybe the new Wingman antenna attachment does help.

After watching TV for a while, we shut it off and I cranked the antenna back down. Usually, it cranks all the way down firmly but, tonight, at got almost all the way down and then seemed to drop with a clunk. This will have to be checked out when we get home. Making a note to do so, we turned in for what would probably be our last night on the road.