We were up about 6:30 and had time to say goodbye to Pam before she left for work. Thomas made us a breakfast of bacon, sausage and bagels. By 8:00 AM, we were loaded, organized and on the road.

We'd like to thank Thomas and Pam for providing great hospitality. It was nice to experience the Louisiana culture first hand for a few days in their beautiful home. The food was outstanding and the dogs were entertaining. I enjoyed the conversations with Thomas without a pair of computers between us and we got to know Pam a lot better. By the end of today, Sandy said she already missed Coushatta. Anyway, thanks so very much to both of you for making this stop on our journey extra special. 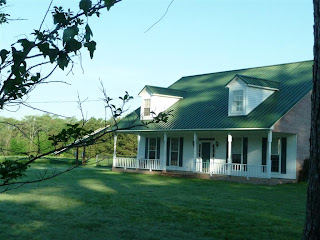 Thomas and Pam's beautiful home
We drove up US 371 past Ringgold where Pam worked. Ringgold looks like a poor and destitute area with boarded up houses and businesses but, in the heart of the small town, there were quite a few churches. Interestingly, tomorrow night we will be in Ringgold, Georgia so this segment of the trip could be called Ringgold to Ringgold.

We reached I-20 at Minden where I stopped at a Love's trick stop and paid $3.759 for gas, the second highest price of the trip so far (the highest was California). Then we headed east over rolling hills that were big enough to cause the transmission to downshift if I didn't actively control the throttle. When we reached Monroe, I could smell a pulp mill. Since I spent time as a child living in Bathurst, New Brunswick with its pulp mill, the smell doesn't repel me the way it does normal people. In fact, it smells a little bit like home.

After Monroe, the hills leveled out for the rest of the state. The roadkill along this stretch consisted mostly of armadillos. As we approached the bridge over the Mississippi River to Vicksburg and the State of Mississippi, we encountered a single lane construction area and a series of Louisiana State Troopers. It looked like they were watching for someone special. 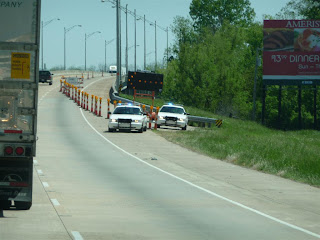 Troopers at the border with lights flashing 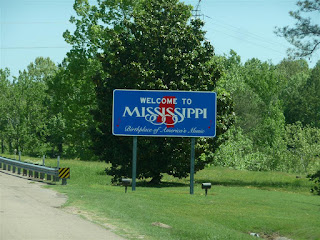 Welcome - but don't expect any rest areas
The road started to go through more hills. We didn't stop at the Visitor Center because it looked like it was at street level in Vicksburg and I didn't want to get into that. This proved to be a mistake because I was watching for a Rest Area along I-20. After 88 more miles, we found one but it was in a construction zone and was closed. Instead, we got off in Newton and stopped at a WalMart where Sandy made lunch. Then we went inside and bought water, pop and a few food items. 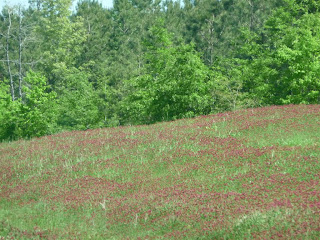 Red flowers along I-20 in Mississippi 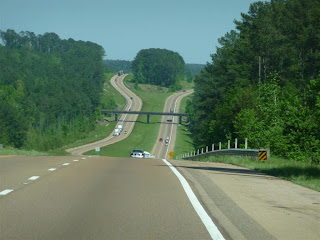 Hills along I-20 in Mississippi 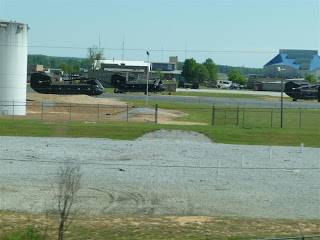 Mississippi National Guard helicopters
In Newton, I looked in our Camp Club USA guide book and found the Benchmark RV Park in Marion, near Meridian, Mississippi. I haven't used this before but they had a discount RV pull through site available and took my name down. This will give us a 50% discount on the regular rate.

We continued to Meridian where I fueled again at a Pilot truck stop. The Pilot's don't cater much to RV's either, with no separate filling or parking areas, but I do get points on my Flying J/Pilot card. The two chains have merged and maybe Pilot can become more RV friendly like the FJ's are.

We arrived in Marion and followed the GPS to the Benchmark Coach and RV Park. The office was closed when we got here but our name and assigned site were posted on the front door. The sites are just parallel pull-throughs without a lot of space but the pads are level poured concrete and they had been hosed down today. I got parked and hooked up and met some neighbors including Ken and his wife from Calgary. They've been on the road since December and aren't in a hurry to get home soon. At 4:30, I went up to the office and registered for the pricely sum of $16.05. 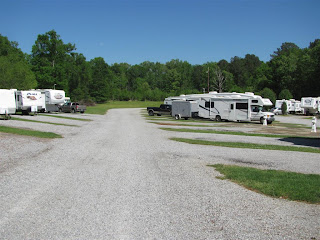 Benchmark Coach and RV Park - Marion Mississippi
I managed to get the blog for the 12th done and we watched a combination of American Idol and Survivior on the cable TV while having pork sandwiches for supper. As usual when we are in a park, we got to bed quite early.