We were up at 7:00 AM and hit the showers. In my shower room, a dad was trying to get his three young sons showered and dressed. They were all staying in a tent. My hat was off to him because he was keeping his cool through it all. As units pulled out, the KOA staff were dragging each site with a fine rake assembly pulled behind a golf cart, making each one seem pristine for the next guests.

Bernie and Susan, our neighbors from Manitoba, planned to head to Carlsbad as well but they were going to travel via Alamagoro. I mentioned he would have some hills to deal with. We said we'd see them later in the day because we were going the El Paso route, simply because it was one we hadn't done before.

We were on the road at 8:40 AM under (no surprise here) clear blue skies. The weather network was talking about rain and severe storms all through the east and the plains states looked like they were getting snow. We'll stay out of that as long as we can. East of Las Cruces on I-10, we saw quite a few feed lots but all the cows looked like holsteins. Maybe the lots aren't restricted to beef cattle. Sandy said one benefit of the motorhome was that we didn't have to smell them. 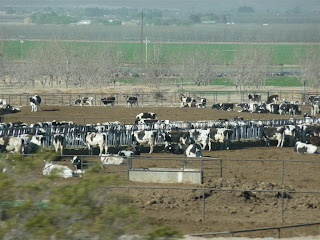 Holsteins in one of many feed lots east of Las Cruces New Mexico
We eventually crossed from New Mexico into Texas. The GPS wanted to route us north of El Paso to catch US 180, but I continued on I-10 through town instead. The reasons were two-fold. First, we've never been to El Paso and I wanted to see more of it. Second, some cowboy in a pickup truck blocked me from getting to the necessary lane. Signs bill El Paso as the gateway to Juarez, Mexico. What a thing to be known for. As we passed through the city on the Interstate, there was a period of time when the Rio Grande was just off to our right and we could see the houses in Mexico on the next hillside. Compared to the new buildings on the US side, the Mexican structures looked pretty downscale. Also, there was a haze over the Mexican side that made me suspect they aren't as scrupulous about emission controls. 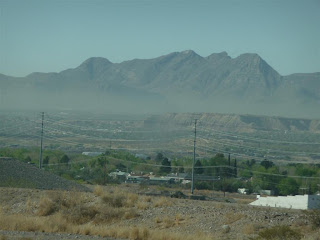 Haze over Mexico
The closed ASARCO smelter made me remember back to when I was working and all the royalties we paid to them for one of our copper furnaces, which used their patented technology. 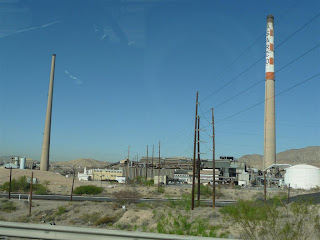 ASARCO smelter - El Paso Texas
We finally came to the exit for US 180, which would take us to Carlsbad, New Mexico. We stopped at a McDonald's for some additional (second as per the Hobbits) breakfast and then I stopped for gas after the GPS indicated it was 132 miles to the next station. I don't know if it is Texas law, but these pumps didn't have a trigger lock so I was forced to hold the nozzle for all forty gallons. On the plus side, regular was $3.39, compared to $3.65 in New Mexico. On the way out of town, we were passed by someone who had obviously scored some rolling tables. We also passed a number of auto salvage yards including one that specialized in European and Japanese cars. We also passed a State Trooper who was taking a keen interest in an SUV. 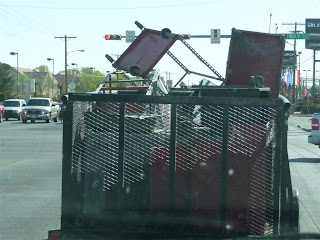 Somebody must have gotten a deal 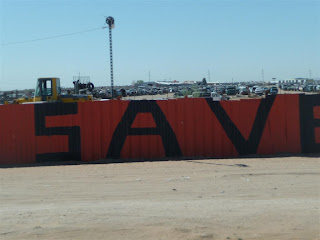 One of many salvage yards in El Paso Texas 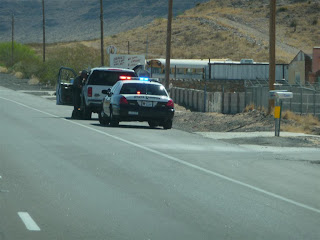 Texas State Trooper hard at work
As we left El Paso, we entered an empty land. Just us, a few fellow travelers and a whole lot of nothing. Except, of course, for the mandatory Border Patrol checkpoint. The officer here actually examined our passports but I think that was just because he was bored. After watching the resources committed to this type of check, I wonder why the US Government doesn't just consider the state and municipal governments allies and let them worry about finding illegal aliens in the course of pursuing their normal duties (as Arizona and others want to do). Then, the Border Patrol could worry about the border. As it is now, these random checkpoints demanding "papers please" make me think of France under Third Reich occupation. 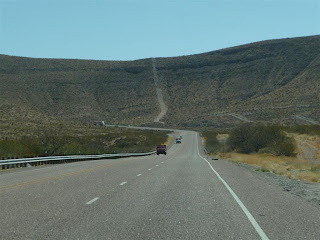 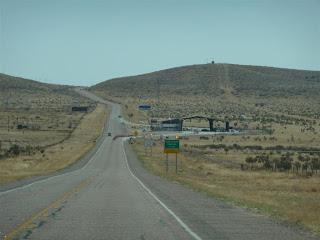 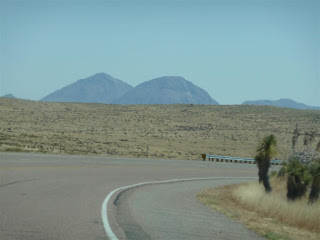 Do these hemispherical mountains make you think of anything? 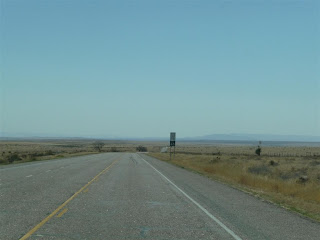 It sure is empty out here
As we motored along mile after mile through nothing but empty countryside as far as the eye could see, a familiar shape came into view. I immediately recognized the distinctive face of El Capitan, a peak in the Guadaloupe Mountains, as it appeared on the horizon.  This was strange because I have never been up this road before. But I knew its name either from a past life, a severe case of deja vu, or because I've seen pictures of it. 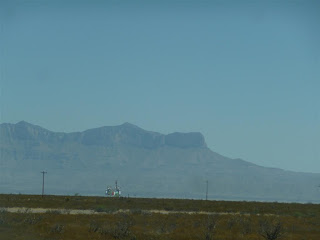 El Capitan
I will give Texas credit. This two-lane highway has a posted speed limit of 75 MPH. This allows someone to make good time without breaking the law, unlike at home. I wonder when Ontario and other Canadian jurisdictions will realize that drivers don't have to be restricted to our namby-pamby speed limits, which we don't observe anyway. It was so hot out here that every time we stopped, the tires would cool fast enough that the tire pressure monitor would think a tire had a slow leak and warn me accordingly. When the pressure decrease stopped, the warning would go away.

The only town we encountered in more than a hundred miles was the thriving metropolis of Salt Flat, Texas. It consisted of a couple of abandoned businesses, including the former Salt Flat Cafe, and one homestead. I know whe have a lot of barren stretches at home, when heading north, but this was even more desolate. 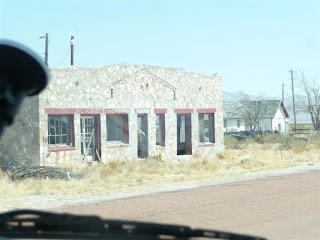 Abandoned building in Salt Flat Texas
Approaching the New Mexico border, the straight, flat road gave way to the Guadalupe Mountains as we passed by the face of El Capitan and started up quite a steep grade. Signs warned about dangerous winds and I kept the speed to about 45 MPH. Still, that was enough to allow me to blow by a diesel pusher straining on the upgrade. 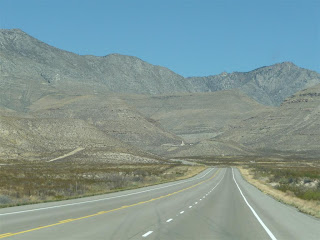 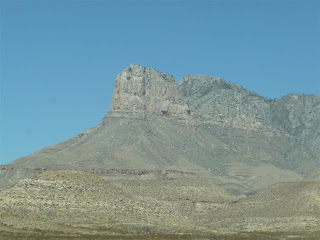 A different side of El Capitan 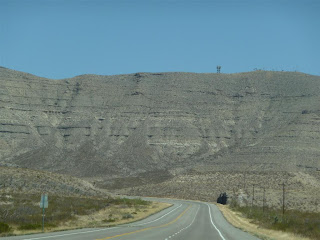 No way to go but up 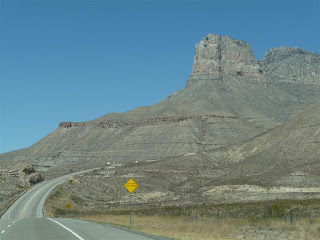 And there is the first climb 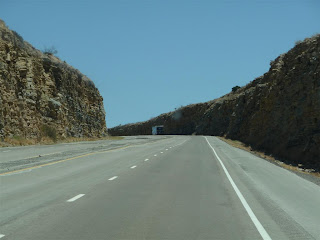 We caught him and passed him 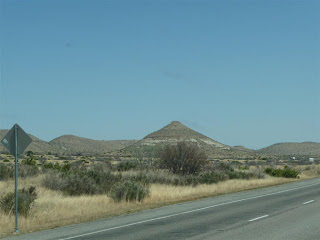 Another suggestively shaped hill
At the top of the climb, we passed the entrance to the Guadalupe Mountains National Park, another Butterfield Stage stop (they are everywhere) and then passed the turn-off to the Carlsbad Caverns. We'd be back here tomorrow. In Carlsbad, we stopped at a Radio Shack and bought two lengths of co-ax cable and a switching box. Bernie got me motivated to hook up the cable TV because almost all the parks have it. Then we drove through the center of Carlsbad at 91F, where the streets were undergoing major rehabilitation. Heading north out of town, we passed a dam on the Pecos River that formed Brantley Lake, with its adjacent state park. 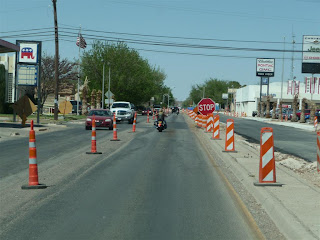 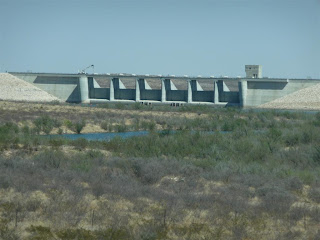 Dam on the Pecos River 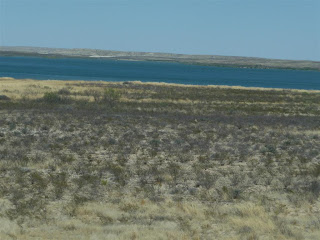 Lake Brantley
North of the park, we found the KOA way out in the middle of nowhere. As we pulled in, a roadrunner ran across the parking lot but it was too fast for Sandy to get a photo. At the desk, the young lady showed us how to by-pass the contruction when we went back through Carlsbad tomorrow. 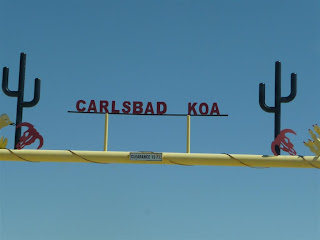 Carlsbad KOA entrance
After getting set up, I went to work on the cable hookup. There is a cable input in the shore line (external 110 electric input) box but it is routed to a cabinet in the bedroom. Our TV is up front in the overhead. I found the inner cable input connection under the sink. It was a tight fit but the old cable disconnected easily. Not so getting the new one attached working only by feel. But, after a lot of bad words, it was connected and I temporarily routed the cable to the TV. After connecting the outside cable to the feed on the power box and telling the Jensen TV it was receiving cable instead of broadcast, we had cable programing. I will eventually find a permanent route for the cabling and get things set up in a more finished and presentable manner, but this will do for now. 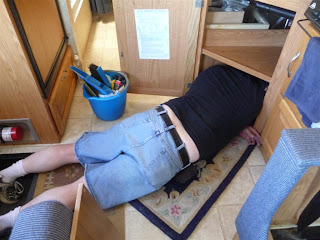 Me trying to get the cable connected under the sink
Not long after, Bernie and Susan pulled in. They had seen our unit and asked for the site one over from us. He said the climb from Alamagordo was steeper than he had realized and had to pull over twice to let the diesel engine cool down. I got a chance to watch the set-up of a 5th wheel rig, something that was new to me. 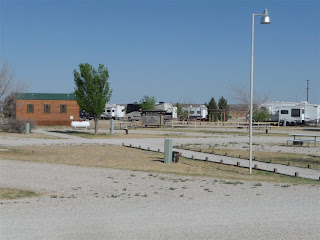 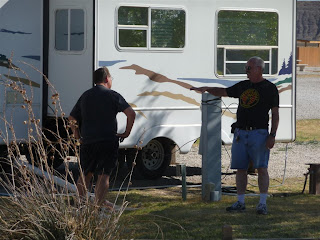 Discussing RV's with Bernie
We sat out and talked with our neighbors for a while, making plans to head for the Carlsbad Caverns together tomorrow. Then Sandy and I had supper and went to the KOA store for ice cream. I managed to get one more day blogged. I figure if I can get at least one done every day, at least I won't be falling further behind. Anything beyond that is pure gravy. Soon, we turned in for the night.

Looks like you are having fun. By the way, the feedlot is really a dairy.

I may never drink milk again:-))